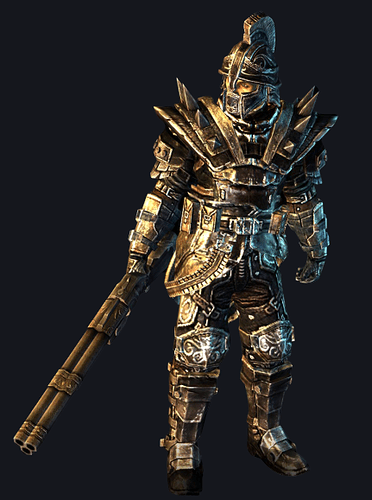 Anyone wearing the set nowadays? I think it’s pretty good. I’m sharing it not as a build, it’s as simple as it gets, but more as a reminder, to check if others are playing it and potentially what time could you achieve as a skilled player.

Skills
Not using Ravager’s Deathgaze from the helm because it doesn’t seem to be worth it and has long casting animation.

Devotion bindings
Tested on a single dummy in Homestead. I want instant RR application. For Eldritch Gaze only FS does that. Next is Elemental Storm. I’ve found out it’s procced very well by Storm Spread even at a distance. Blazing Eruption from Korvaak’s Deception is perfect for Meteor Shower - it has 100% chance to proc it and with CDR I have MS recharge is just under BE recharge.

Mad Queen
This video was made with the character from the 2nd Grim Tools with less armor but the same offensive potential.
Tested it with the newest one and it’s still consistent 7 - 8 seconds not dying.
But when I rebound devotion skills for testing purposes she started killing me every time instead,
probably because I was fighting for a second too long so it’s close and details are important. 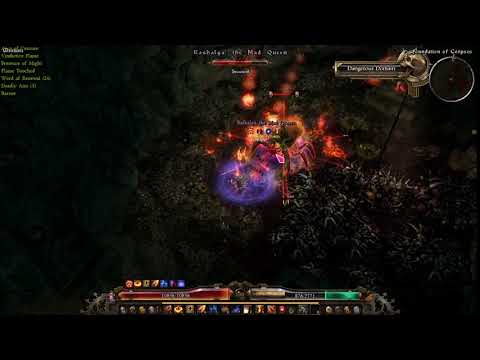 Crucible - can facetank a lot and every death is always due to some stupid mistake. I’m not a skilled player so I only started approaching 6 minutes times at best. Here’s some gameplay: 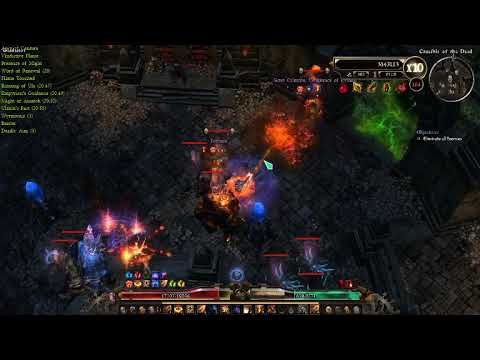 I have seen in the past version but that was some time ago.

As a fan of flat damage to auto attackers, I would like to see Dagallon helm being used, maybe Abomination but that’s hard to fit.

Weirdest skill point disribution i’ve ever seen . check https://www.grimtools.com/calc/eVLYJDLZ this out, should be near Desolator level.

Your changes are questionable but maybe worth testing. Here are some of my doubts

Burning Void doesn’t seem to be needed because I have already 96% WPS chance covered. You’re lowering the chance of Bursting Round from 25% to 21.5% this way and of course 4% Phys res lost

Not sure if 4% phyz resist matter, seal of blades is probably better.

¬22 flat is not worth it. Better change rings augments And that %dmg reduction from WoR can make a difference betwen life and death.

There is a dmg calculator on OA/DA/%crit dmg gain. I bet its worth less that 1% of you dmg output.

losing Wayward Soul 100% proc on Blast Shield. That’s a lot of Armor and DA when you need it.

Thanks for your input. I’ll test your changes in Crucible at some point because they are at the level math no longer works because it’s too dependent on how it works in practice and too many factors influencing it. Like you said - at what moments Blast Shield procs. When it procs do you need even more defense etc. It even depends on player’s skill.

Good luck with it . We need mo4r awesome gunslingers

There is a dmg calculator on OA/DA/%crit dmg gain. I bet its worth less that 1% of you dmg output.

I plugged some arbitrary numbers without making monster DA analysis in the calculator and got 3% damage increase. Not the worst, especially since builders tend to use every DPS gain possibility.

[edit] On the other hand I plugged some different numbers and got 1.3% so it really depends how close you are to monsters DA I think, their debuffs and such. Content of course, Crucible vs superbosses for example.

However it would be most valuable on characters with Devotions that proc on Crit. Like Ultos. Because the calculator doesn’t include the increased chance of proccing them. Or on characters with a lot of %Critical Damage (not the low fluctuating 25% - 42% this character has) from either equipment or main damaging skill nodes.

My point is I wouldn’t automatically pass over OA when trying to optimize DPS, at least on characters I mentioned above.
For example Lightning Grenado Elementalist.

Tiny yet important update
Haunted Steel boosted sustainability a lot so that the character can take multiple bosses at once
even if standing still in the crap they put on the ground (I ran a few Crucible of the Stars standing in one corner).

First time giving up on a build; can it be saved?