Hi Everyone, how i can attach fx to this places? 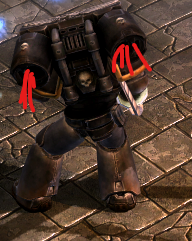 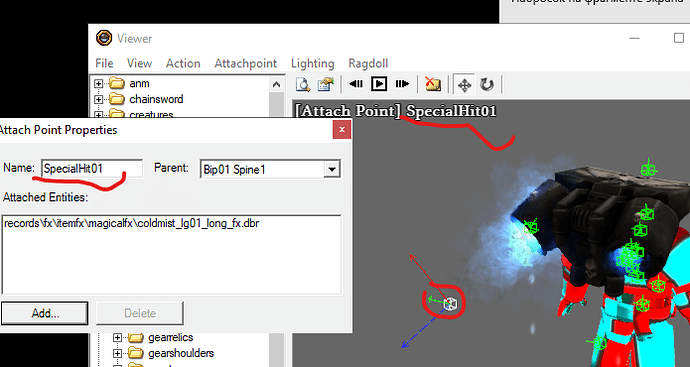 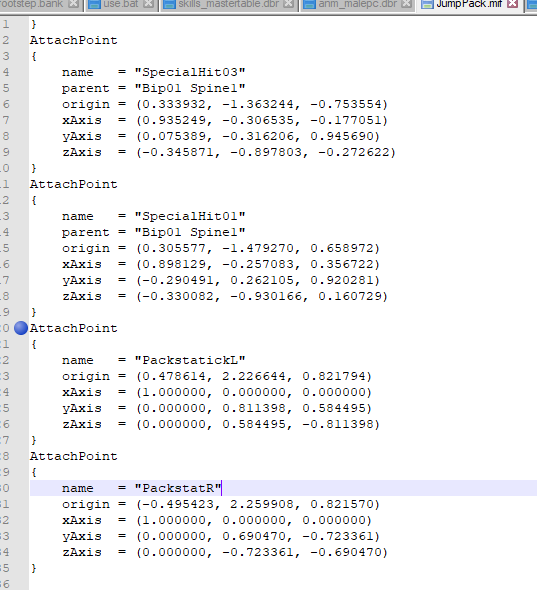 image.png537×590 20.7 KB
it work once when i use warmUpeffectName and choise bone, but it uses only on that bone, i cant choise my own attachpoints . and i need 2 FXs

there s only one place where i can choise

There should be a couple of ways to accomplish what you want to see! First one to try is actually how you’re trying to do it, but with a few additional changes needed! You’re on the right track with the ‘particleEffectAttachPoint1’ and 2 parameters. The only thing you need to do now is include some callbacks for the skill in the .aif file linked to the leap animation (.aifs are just text files with callback points, if you’re not familiar with how they work, we can give you some tips there as well):

and in the dbr file:

Let me know if that doesn’t work out for you and we can try to figure out what’s missing. Good luck!

Thank you for support
2 questions:

And another question about FX on armor ( not about skill) Why, the effect that I assign to the attachment is valid for the Spine1 bone, has 2 problems: 1 - the Viewer is displayed correctly, FX is where the turbines are, 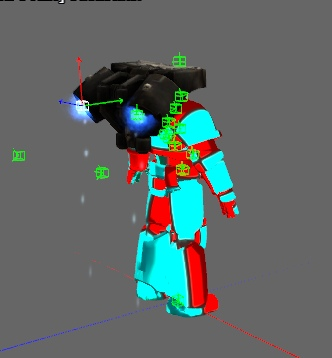 in the game is on the opposite side 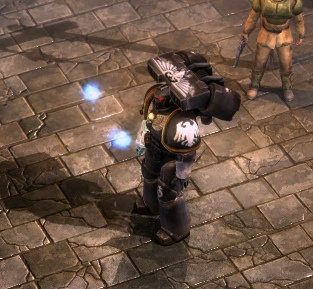 . 2 - they also move strangely in relation to the armor, it is clear that they follow Spine1 but slightly incorrectly if they are late for a second through animations, the movement of armor and FX are the same but not synchronous. This is only on the armor, if you put this armor instead of Hero_00 in male01.dbr, then FX works correctly, however, in both cases, when using the Leap, FX skills, they remain on the ground and do not take off with the character 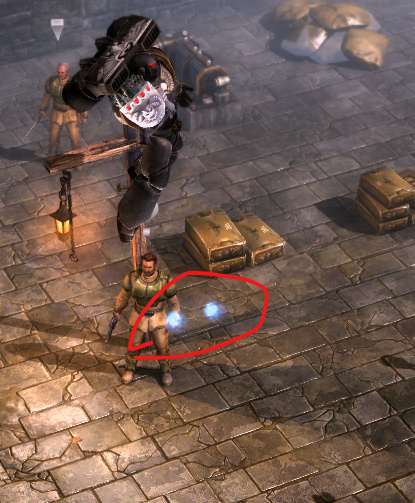 1. How i can build aif+anm if it ingame (engine) already, i can open anm with notepad++ and add some callback, but how i can put that animations in build? bcs i dont have Sourse->Asset files, only resourses.

With that in mind, if you add a new aif file to source with the same name, it should add in your changes to the animation when you build. As you discovered, you can see the contents of the .aif file in the anm file when you open it in a text editor. To create an .aif file as previously described, simply copy the all the human-readable text at the end of the anm file (starting with “callbackpoint” all the way to the last ‘}’ ). Next, create a new .txt file with the name of the .aif you want to replace and rename it to have the ‘.aif’ file type. When you add it to source and build, it should update the animation (hopefully).

Yes, you need to add the attach points to the Hero_00.msh’s mif “Hero_00_Body.mif” To do this, similar process as before, copying out the mif from inside the .msh file in a text editor, starting with “AttachPoint” all the way to the last “}”

As for your last question, I’m not really sure how you’re attaching those FX (on the armor’s mif or via the skill setup we discussed). If the attach points & FX are on the armor’s mif, there could potentially be a number of problems. Rather than trying to troubleshoot them all, here’s what a .mif from one of our shoulders with ambient FX looks like:

Once you have the FX on the msh in the viewer, you should be able to test and see how it follows the character’s movements by loading one of the player animations onto it and playing through the timeline.

I hope that helps, let me know if you’re still having issues!

On second thought, looking at that last in-game pic, it looks like you’re using custom animations for the leap skill, is this true? If so, you should just be able to create an .aif for that animation and add it to the anm file when you create the asset in source (or edit it/add it in assets).

nope, that animations from GD)

i can create new aif, but i havent max files for GD animations, mif and aif files cannot add to asset throw the sourse, it adding by choise when you trying to create max files, there only one place for aif/mif. So without original max file, i cannot update?

about FX https://gifyu.com/image/ETWF in viewer its ok, but ingame it has 2 problems, 1 - 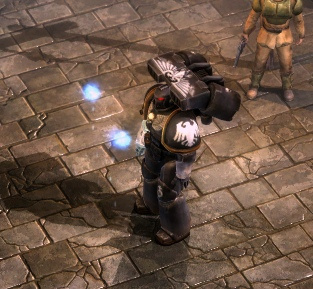 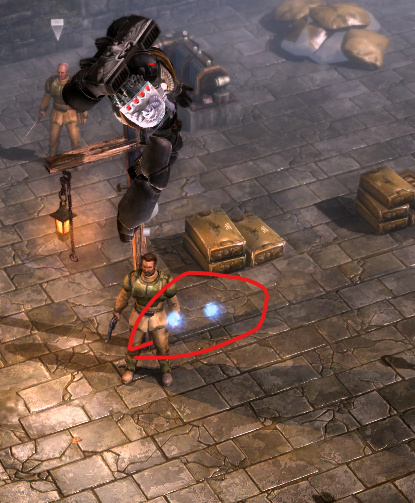 i noticed this animations dont jumping in viewer, i tryed uncheck lockbones, not helps, i think jump created in game engine, not in animation.

but when i tryed this

and choise R hand, it works and flying with character, so i dont understand attachment not flying?

Did you hook up your new .aif to the original anm file’s asset? 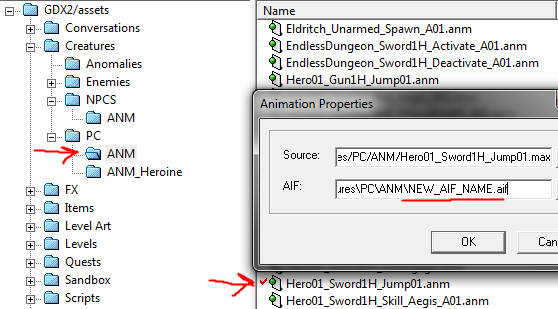 When you build with a new aif plugged in like that, it should update the anm file.

but i dont have the original anm file 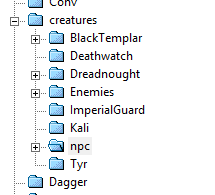 Hey Emrakul, obviously a bit of a difference between what we can see/do and what you see, so please bear with me in trying to figure this out. . .

Are you able to right-click > edit the extracted anm files in the assets tab of the AM? Can you modify the location of the .aif file that way? Do you get an error message when you try to edit it?

Yes, the jump is partially created in the engine and is controlled via callback points in the aif (StartJump and StopJump) which could explain why the attach points aren’t following the character.

The aforementioned callback points shouldn’t cause the FX to not follow the player, I’m not exactly sure what’s going on there.

i dont have any extracted anm in AM. The asset manager doesn’t extract the files, that are shown on the screenshot, that you’ve provided. The only files that are extracted are the resources, .anm files simply don’t show up, so I cannot modify the location of the .aif file in any way.

It seems like the developer AM has access to some of the game’s hidden files, that the user AM isn’t able to see.

There should be a way to extract the anm files from GD and place them in your mod.

Do you see “Tools > Extract Game Files…” in your AM? The source/build paths need to be set up correctly in order for it to work. Depending on which folders you choose, it will extract a LOT of data, so I’d recommend temporarily setting a new mod/location before you try it. Then you should be able to copy the items you want over to your mod and edit them. If that doesn’t work, I think I might have another work-around for you.

Seems that “Upper Body” is not actually parented to the skeleton, so that explains why it was not following your character. The attach point “Target” might be a good point to try as it is parented and located in the middle of the character. You might be able to make it look like fire from the jets by making your own custom FX and offsetting the emitters in the FX editor so they look like they’re located by the exhaust.

I’ve done the correct file extraction, but the files that you show aren’t there. I guess we’ll have to use the work-around method, that you’ve mentioned

it works if i choise “Target” thanks a lot! i have new question, i want to create Flamer weapon, and i try put skill from inquisitor “purifyingflame” on it, but i cant change animations, 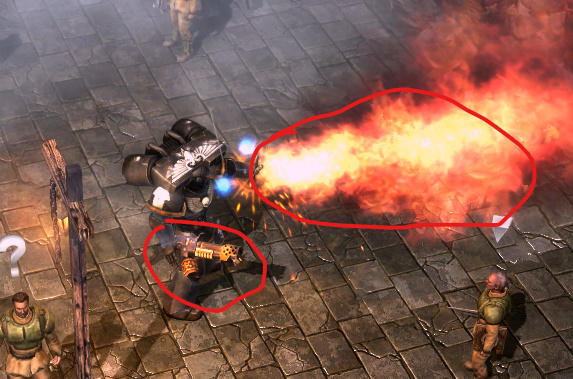 Hmm, you might have to manually copy over the anm files to your mod, I noticed when I tried it, the files weren’t where I thought they’d be located. That being said, if “Target” is working, we should probably just go with this technique since it seems like it will be less of a headache.

In regards to your animation question, the field you specified is actually a string that references the PC animation file. In that file, there are callbacks associated with special animations for the skill(s) in question. If you wish to change it, you’ll have to make a new string there and also add it to the animation controller dbr: 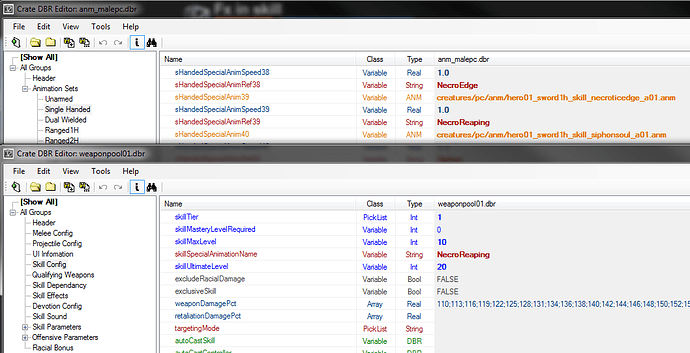 As for the offset issue, perhaps the axis is wrong? You could try using “SpecialHit03” for the attach point instead of “Target” as I noticed the orientation/position is a little weird on Target.

Thank you a lot!!! Really without you help i cant did this: GIF anim - https://gifyu.com/image/EwMJ 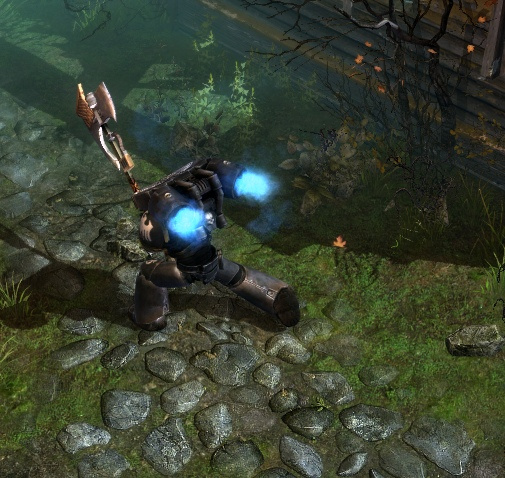 about animations , i made those steps as you say, but its not work

Looking awesome! Glad you got it working!

When you applied the animation override, did you do it for the base game or the latest expansion you have installed? For example, there is an “ANM_Male_PC.dbr” file in the base game, GDX1 and GDX2. If you modified the one in the base game but have GDX2 installed, your changes will not show up in-game. Apologies if you were already aware, but just thought I’d ask in case not!

I’ll ask around and see if there could be something else to blame.

i tryed original and GDX2 anm_male_pc. but no result