Nature’s Avenger set has been seriously lagging behind in the Forgotten Gods meta (as most 2handed builds have). Builds based on it don’t do well in the damage department nor have enough tankiness to justify low damage output. There are literally just a couple of relevant two-handed physical builds in the builds section: it’s my Leviathan/Bloodrager Blade Arc Witchblade and @John_Smith’s 2-piece Avenger/Bloodrager Archon. As you can see, only second one uses couple of Archon pieces and both use full Bloodrager set (which is primarily a Bleeding set).

Nature’s Avenger Warder is a relatively slow killer, average reported Crucible timers are around 8-9 minutes mark. Bloodrager with Avenger pieces beats full Avenger any day of the week. So what does Avenger need?

In conclusion I wanna say that overall two-handers are still in a pitiful state. They lose to dual-wielders and sword and board builds in every department. I think they should deal MUCH more damage to compensate for innate squishiness that comes with playing with a big slow two-hander with a huge damage spread and just one component as opposed to two components that dual-wielders have.

P.S. In case anyone reads it and thinks that current Avenger’s performance is fine, please take a look at my latest Cold Blade Arc (!!) Blademaster, a meme build with zero dedicated gear pieces that just shits all over Nature’s Avenger both in terms of damage and tankiness.

Completely agree with @mad_lee propositions and suggestions.
The set terribly lacks damage, AoE, some resists.
It should be also fine adding +% phys/trauma damage on proc add ADcH on it instead of regeneration.
Also, pierce/bleed resists on belt may be replaced with sth more useful, like aether/elemental.
Attack speed. Increase it on weapon at least to 16%.

https://www.grimtools.com/calc/YZeoBlQ2 - the build I utilize now. Went to Oleron to have at least an AoE.

I actually tried in previous patch to build Archon around it. But damage was not worth it. When you have 2h build, you want more offense, compared to DW, cause in DW you hit and steal life quicker, CC and especially fumble have less impact.

Nature Avenger health regen method is intriguing, so I will not suggest more defense to it(maybe better resistances) but more damage will be welcomed!

Oh yes, poor avenger
Mighty once long ago now this set a balancing between barely played set and pit of absolute garbage (with a strong bias towards the latter)
Actually, small changes are does not fix set, it will need EVERY change that are mad described in his post

I was trying Archon with Avenger . That was a glass canon piece of shit , You must take ALL defensive , what you will get. Offensive setup lives only 8 sec . Pls change duration on the proc from 12/8 to 8/12 . ALL SURVABILITY concentrate in the proc . If proc is over, you have nothing , and 2 Reapers really glad to see you with hags and punch with your face . That gang-bang brotherz party , when proc is over , teach you how to fly to the moon with power of your ass.

This concept of melee regeneration sux. More accurate to say, melee char that have nothing powerful except regeneration sux. 2-3 k hp regen is nice support, but char also needs tons of AS, dmg and lifesteal to survive in cruci and SR.

Has anyone tested this with he-who-must-not-be-named… I mean warlord? That’s the guy who defies all odds. Maybe it can make avenger look good too?

With Cadence?.. Or Righteous Fervor? Not sure what Warlord can add here if Archon fails. Even if it works a bit better with Warlord it really doesn’t tell anything besides what we already now - warlord is op.

Fervor for sure. Cadence 2h is just bad due to all the random fumbles. You can’t get around that with buffs.

And the warlord is OP argument is too overused. If the warlord side here is indeed good then at least Crate has an idea where to buff avenger. Cause if avenger gets buffed and warlord gets the benefit more than archon or warder then I’m pretty sure the same people in this very thread will be the ones who will cry for the 2nd round of warlord nerfs.

I hope that the following changes will be made:

Request for another related item (EPIC)

So from what I have seen Avenger’s set is still incredibly slow and kind of glassy. Stacking more regen predictibly hasn’t worked out.

Can we inject some proper steroids into this set, @Zantai? Pretty please? This is a two-handed physical set tailor made for Warder and it performs MUCH worse than let’s say my off-beat Physical Blade Arc Bloodrager Witchblade.

Yes, I also tried a defensive build that emphasizes health regeneration (Healing Rain + Giant’s blood 10k over at full proc). I don’t remember Tempo buff, but I think it was about 2.5-3k. But it was glassy.
Since Tools is dead, you can’t put a link, but now I choose Orelon + Healing Rain at the expense of the attack surface and earn about 30 overresists. Health Regen does not reach 5k with Full proc, but is much more stable. However, it is clearly inferior to Bloodrager.
I would also like Crate to give this set more love.

I previously suggested it in Adoomgod’s feedback thread, what do you think of changing Doombringer this way for Avenger Warder / Archon?
Considering competing with Bloodrager amy and Condit (-15% RR) and losing + 1soldier, I don’t think this spec is OP.
Also, the flag looks unique and interesting.
However, you need to stay on the flag radius to get the effect. 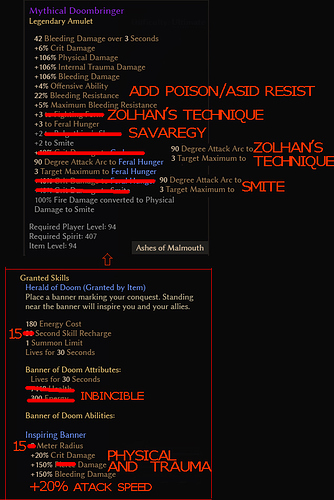 doombringer idea.jpg634×948 331 KB
As pointed out by mad_lee, we will add that flat bleeding is changed to physical (or trauma).

+1 to those. Change flat Bleeding into flat Physical too. Having that banner skill in endgame can be very interesting. Would make this amulet somewhat competitive. @Zantai please take a look, I think xOMOCHIx has a cool suggestion on how to fix Doombringer amulet.