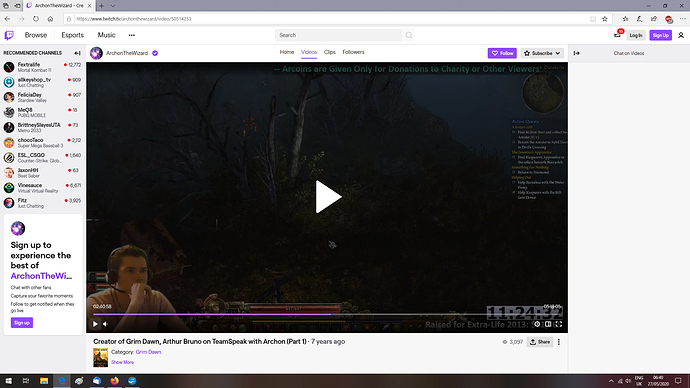 If you search on Twitch for ArchonTheWizard and scroll down through all videos you’ll find that interview and also the 2nd part of it as well. It was a 5 hour marathon!

Best I could find:

Titan Quest was designed so that our grandmothers would want to play it -...

We already know that the gaming industry is basically just a business these days and nothing more. We also know that publishers often interfere with their games’ development and most of the times, this is not a good sign. So after Arthur Bruno’s...

Within the article is a link to the original forum post itself but after the recent forum upgrade all such links are useless.

Best I could find:
https://www.dsogaming.com/news/titan-quest-was-designed-so-that-our-grandmothers-would-want-to-play-it/

Within the article is a link to the original forum post itself but after the recent forum upgrade all such links are useless.

I tried searching the forum for various different snippets of medierra’s quotes in that article and sadly nothing is coming up. Unfortunately that in itself implies that the thread it was a part of is gone, a victim of the class of threads past a certain date and in certain “categories” that was purged/deleted. Whether they still have a copy of it offline, only Zantai can say.

Well, someone better thank whoever had the foresight to archive that lol. It appears to only be the first page of the thread tho, sadly.

Yeah, looking at the archive link shows that it was posted in the “Rants” section of the old forum, which would have definitely made it a victim of the purge.

Let that be a lesson to everyone… if you see threads/posts that you think have value then head to the Wayback Machine and archive them, just in case!

There are even add-ons to make it easier, for example
(you just right click and select Save to Wayback Machine)

Here’s an “official” one for chrome-based browsers…

Reduce annoying 404 pages by automatically checking for an archived copy in the Wayback Machine.

I hope that if civilization is ever destroyed these posts will be found on some hard-drive spared from the catastrophe and used as guidance to rebuild the world of Grim Dawn.

Ah, I see. It was a forum follow-up post to the 2011 Rock Paper Shotgun article I had linked above. I don’t know why I imagine a permanence that doesn’t exist when it comes to the web. Ah well.

Early on, Brian Sullivan who was one of the owners, frequently talked about how he wanted the game to be accessible, so that even his grandma could play. It was an argument for reducing the amount of stats in the game and not having any blood or overly grotesque / evil enemies. He felt that the character sheet looked too much like a spreadsheet and we shouldn’t have so many numbers.

I countered this by asking how many ARPGs his grandmother plays, which of course was zero…

I forgot whether it was Sullivan or THQ that had the no killing humans rule.

In the end, he relented on much of those ideas or we found ways to work around it but I definitely feel like the lack of hit and death effects contributed to people’s feedback that combat lacked impact.

Such is the madness of other companies I’ve worked at.

When you finish the Crate story hint hint maybe you should then write the TQ/Iron Lore story.

Thanks boss! Assuming there’s no NDA in place I would gladly read the memoirs of developing TQ.

Assuming there’s no NDA in place I would gladly read the memoirs of developing TQ.

Well, he has been talking about it pretty openly for all these years (he’s been vocal in interviews across the internet) and he definitely hasn’t been holding his punches on what he thinks about it. If there ever was an NDA it died with Iron Lore, and then a second time with THQ.

Just looked up Brian Sullivan on my linked in…he’s a 3rd removed contact for me…don’t think I’ll be adding him.

It’s pretty crazy reading that Iron Lore didn’t think much of TQ and TQIT. I mean, why develop a game as a company leader if you have no idea what a good game would look like? TQ was an unqualified success, and no doubt could have had much more success with some marketing behind it. Of course, if that had happened then I wouldn’t have just found this amazing quote on the Crate Entertainment wikipedia entry:

In a live dev stream on Twitch on 19th April 2019 Crate announced that Forgotten Gods had sold over 100,000 copies and collectively between all of the DLCs and the base game Grim Dawn had sold over 3 million copies.

THREE MILLION COPIES!! That’s amazing, and it gives me great hope not only for the continued success of Crate but also for perhaps another game that might follow in the footsteps of Grim Dawn, I dunno, like a 2nd version of the game with an updated engine, something like, um, Grim Dawn 2 maybe??

Amazing job on this game guys, I can’t wait to see what you do next.

As far as the interview, I loved it. The Holy Grail reference, the “take care of your employees and they won’t stab you in the back” stuff, the no deadlines at all. I mean, Art might be the best boss in the freakin’ world.

To be clear, Iron Lore did think a lot of TQ and TQIT, it was THQ that basically decided at some point that isometric ARPGs were a dying genre and PC was a dying platform.

Could ya give us a ballpark on how well the expacs have done? I’ve been interested in that and I’ve seen others wonder the same as well. Be interesting to know. Wonder how much the Definitive bundle has contributed to recent sales too.

Im actually pleasantly surprised to hear it’s already at 5 mil. Not sure how long ago it was that Z alluded that it was around 4 but it doesn’t feel that long ago. Congrats.

I dunno, like a 2nd version of the game with an updated engine, something like, um, Grim Dawn 2 maybe??

Also check out medierra’s response to a discussion on Steam.

That is amazing. Looks like continued development pays off. I hope other game developers learn from this example