[Suggestion] Increase the shared stash space and number of tabs

First a big thanks to all Grim Dawn Devs for making the BEST ARPG of the History. Now for my suggestion: Please increase the Shared Inventory space to look something like the picture and make possible to purchase around 50 (yes 50) or more Tabs. I would make my life easier, me all the other Alt-holics could stop using third party software, mods and mules that only break the immersion and make the game less fluid. I think this would not affect the difficulty of the game and only would add more fun to the replayability vaule. 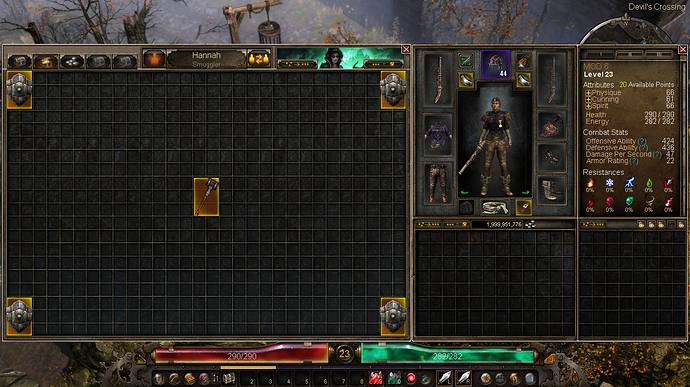 As said before: Thanks to the Devs! Hope you continue making expansions for Grim Dawn.

This is something that’s been suggested many times, but the devs are firmly against adding any more stash space to the game.

Thanks for the Welcome! But why they are against it? It’s not like is going to break the game, I mean you can’t attack with your stashed items…

But why they are against it?

Read all the other 700 threads with this suggestion.

If you want infinite stash, then you’ll need to use a third-party tool. I’d recommend GD Stash.

For the devs thoughts on this, read: Grim Misadventure #56: What's New in B22

Storage is actually kind of a personal thing, in terms of what is the right amount for people. Some people obviously want infinite storage and wish they could collect and categorize everything in the game. Other people will never hang on to enough stuff to fill up the storage available. Another group likes to collect things but wants some limit that eventually forces decisions about what to keep and what to sell.

Both the second and third type of player are similar, just one makes the decision proactively to sell things before they accumulate and the other holds onto things for a while until they’re pushed into making a decision as space becomes limited.

If you’re a hoarder who wants infinite space, you might be thinking “why on earth would anyone not want to keep all their items?!” Basically because people start to become overwhelmed by the amount of crap that they have. It becomes tiring looking at it all, sifting through it, trying to organize it. Some people love that but most people find it burdensome. Yet, left to their own devices with infinite space, a lot of people would just keep collecting things to the point that they didn’t even want to open their stash and have to deal with all the shit in their there.

I think for many, myself included, it also starts to diminish the perceived value of items as you amass a vast trove of them. If you have limited space and you find a duplicate epic weapon, you’ll tend to look at the stats and sell the lesser one. With infinite space, you’d probably keep collecting duplicates, because why not, and you’d end up with a dozen pairs of “The Final March.” Personally, I’d find that kind of immersion breaking looking at pages of multiple “unique” items. I mean, sure, we all know that items can drop infinitely but actually collecting them and seeing multiple copies laid out next to one another for different epics just kind of twists the knife in the gut of my suspension of disbelief.

I don’t have any hard metrics on this but my feeling is that the majority of players fall into the categories of not caring about stash size, wanting a limit on it or not realizing they want a limit on it but would have a detrimental experience if there weren’t one.

Either way, it is almost a certainty that someone will create a GDVault type program to add infinite storage for those who desire it - in fact, I know people have already worked on one. So it seems most practical to build in some reasonable limit, not too small and not too large, that will please most players, then let modding take care of those who need to collect it all.

Thanks for the feedback. I never tough that this topic was so divided. I checked some old posts about it. Guess mods would have to suffice for the time being. Hope the Devs reconsider it. Anyway keep the good work! Cheers!

Hope the Devs reconsider it.

The devs have reconsidered it and, over the course of the game’s development, increased the stash size 3 times (IIRC).

To be honest, the devs were pretty clearly against components autopickup, yet they put it in the game recently.

To be honest, the devs were pretty clearly against components autopickup, yet they put it in the game recently.

As mentioned, the devs increased the stash size 3 or more times during the development of the game. The quote above was before the first increase, so I think they’ve done putting in what they want.

They could surprise us, but I wouldn’t want anyone to have false hopes.

Stash space was increased when we vastly expanded the number of items in the game, aka with expansions.

We have no plans to add infinite storage to the game.

For those that need that, mods exist and are supported for a reason.

We have no plans to add infinite storage to the game.

Not Infinite, but at least could you make the Shared stash window a little bigger, like the picture in the top?
By the way: Thanks for the game, it’s the best ARPG I ever played, and I been playing ARPGs since the first Diablo.

Not Infinite, but at least could you make the Shared stash window a little bigger, like the picture in the top?

That’s fine to do for a mod, but not possible for our officially supported resolutions.

Ok, now I get it. Thanks again!

I recommend [if you want]
Grim Dawn Item Assistant

Is an unlimited item collection tool Can search for items as needed, very convenient

Out of interest what happens if someone’s using one of these mods and the mod maker decides they can’t support it anymore for whatever reason (and no-one else takes ownership of it)?
I mean I’m asking because I don’t know how it all works, will those mods always be compatible with new versions of the game? Could there be a scenario where your modded stash just ‘doesn’t work’ any longer?

Also do any of these mods work with Steam cloud saves enabled?

That would depend on how much more Crate are going to update the game. We know there’s a new rogue dungeon on the way so that will affect stash mods and other mods as well. What they may add after that we just don’t know. That could be the end of it in which case if the mods are updated for that then they’ll stay that way. If Crate decide to add some more items that would affect them and if not updated to show new items they probably won’t appear in the stashes properly.

It’s up to the creator of the mod whether they keep supporting it or not, but mamba (GDStash) is a playtester so that’s likely to stay up to date. Whether GDIA will I don’t know, but I think I’m right in saying MrPete made the source code for that open source a while back. If that’s the case then someone else could pick it up and keep it going.

Both GDStash and GDIA will work with cloud saving iirc, but you have to be careful with saving the stash correctly if you do use it.

It’s up to the creator of the mod whether they keep supporting it or not, but mamba (GDStash) is a playtester so that’s likely to stay up to date. Whether GDIA will I don’t know, but I think I’m right in saying MrPete made the source code for that open source a while back. If that’s the case then someone else could pick it up and keep it going.

GDIA is open source, and GDStash can read backups from IA.
So worst case scenario, if GDIA ever stops working, items can still be restored using GDStash.