I would like to see the trap resist reduction from the rimetongue amulet proc rolled into the blade trap mod on the four piece. This would be a nice QoL buff to rimetongue builds. Mageslayer doesn’t have to rely on chance to make Flash freeze useful. Make blade trap great

I would suggest switching some mods to make rimetongue more viable. Like, moving pierce to cold to grenado to moon crescent and getting the phys from it moved to the set.

I suppose there is enough supporting itemization now that the conversion on the set is a bit redundant and perhaps stifling.

Crescent Moon and the Conduit together cover the Cold variant, though perhaps we can add another option in there. Gildor’s Pulverizer already does complete Pierce conversion on its own.

I’m not sure if it’s technically possible, but it would be really sweet to somehow make Wind Devils permanent on Cyclone set. Or maybe make it summon 2 devils at once. Nerfs of the set aside, unending interruptions of EoR to cast the devils are the lamest thing ever. Completely kills any fun of an otherwise awesome concept.

All three Mythical Demo relics are fire based, and while Annihilation and Korvaak’s Deception provide good and diverse stats, Ulzuin’s Pyroclasm is just… well, kinda bad? Proc is okay, but other than that it doesn’t bring anything to the table. 50% fire res? We have enough of that on other items and constellations (if you combine all of them, you can get like 400% overcap without elemental res, wow).

So how about replacing it with some acid res instead? Acid is probably the most difficult resistance to cap on elemental builds: it’s existance on elemental items is practically nil. Some freeze res wouldn’t be a bad thing to see as well. And adding % electrocute damage with improved duration will make this relic a good alternative on lightning Demo builds like lightning Grenado, Canister Bomb or, hell, maybe even BWC since we have a conduit for that.

Idk why you can’t complete CR half of the time of fire Blade Arc Commando.

apparently because no matter how many defenses one stacks, it`s all not much of a help upon encountering grava/kaisan under shattered/resistant mut while being fire commando with mediocre damage output.

it is indeed. personally i feel like claymore could use -rr to mines instead of blast shield mod.

same argument must hold also for any fire FW or lightning FW build. But at least fire FW commando is considered (afaik) a decent build type.

i don’t remember seeing any lightning FW (mainly because there’s no 2H weapon for it). My point was no matter your defenses, for elemental builds it always comes down to amount of RR you stacked.
(and yet again pointing out the infamous human-heroes-have-to-many-slots-for-greens-with-resistant-affixes problem)

By that logic if a build can’t kill callagadra then it is a bad build since calla " is the hardest boss in the game" You do understand that CR is not the only place to determine whether a build is good or not right ?

and you do understand that CR was used as a measuring stick for a couple of years, right? there were dedicated buffs and nerfs to its difficulty. and even here Zantai talks about CR timings in the very beggining.
as for Calla - trust me, every single build in the game can kill it on SC, by just kitting it to death. Will take a while though.

i don’t remember seeing any lightning FW (mainly because there’s no 2H weapon for it). My point was no matter your defenses, for elemental builds it always comes down to amount of RR you stacked.
(and yet again pointing out the infamous human-heroes-have-to-many-slots-for-greens-with-resistant-affixes problem)

I had to do some digging to find this

Not updated one, but in principle it seems to “work”.

But yes that is kinda BS, I think there at least should be some maximum overcap human heroes and bosses can get on resitances. On the other hand, we have arcanist builds doing elemental damages type too which works fine

[Suggestion] Could we get more support for cold FW, please? Classes, Skills and Builds

Pretty much the title. While fire and phys FW have dedicated sets and 2handers, lightning one has conduit/helm and ele has Arcanor, cold FW has only conduit support. This isn’t enough as it’s impossible to get the skill itself to 26/16, not saying about maxing nods. I made this build https://www.grimtools.com/calc/dVbmkoO2, it’s pretty sturdy but the damage is rather poor (seen well in SR). Some videos too: So, I suggest adding bonuses to FW like +skills and flat etc to some cold-dedicate…

Introduction Forcewave comes in different shapes and sizes. I wanted to explore the option of lightning one. To my surprise I liked Warder version better than Tactician. The support of the skill is minor outside of conduit+helm, but this build is surprisingly decent. Credit for the idea to @malawiglenn Build Update 1.1.6.2 [Freya%20Warder] pic with permanent buffs, damage for Forcewave GRIM TOOLS

not every build can kill it.

with enough patience i bet every build could kill her

(since she lets you kite)

not sure if it’s my place to butt in in this debate, but as i read it, and sorry if i’m being presumptuous in all this (or out of line); it doesn’t seem like Grey has unreasonable expectations of a build, but highlighting a (potential) flaw
-something like SR favouring/allowing you to build defensive and tanky and do stuff 1v1 + tanking your time as your please, doesn’t exactly address, fix or counter that issue

if a build, that by any other means “should” work, is suffering, from “just” 1 factor, ex low dmg/dmg archetypes, that in any other fashion would easily clear the same, (assuming here the/grey’s example is “any other BA dmg type build or fire build”), it might be worthy of consideration and at least not just outright dismissal “just because SR/Cruci difference build performance”
^PoV also being mostly when i read grey’s builds/complaints they don’t strike me as outright absurd/greedy and asking for balance changes just for BiS run/personal build’s sake

with enough patience i bet every build could kill her

(since she lets you kite)

just run around in circles poking her for like 3-10 hours or something, “patience”

This is what makes me reject calling builds like this “Calla killers” and grey’s statement on the subject as well. No one wants to spend 10+ minutes running around kiting Callagadra with the chance of making a misstep or mistake, getting OHKO’ed from her sand or something else and having to start over. Anyone that opens up a build touted as a Calla killer expects to it do it relatively safely.

Can every build kill Calla? Technically yes. Should the majority of them be called Calla killers? No, not in my opinion.

no disagreeing with that, also why i wouldn’t put any weight if a build was posted just saying it could kill calla, without a timeframe. Tho i don’t think (most?) builders would do that anyway/be deliberately that misleading leaving out mentioning it took 20+mins or something
but still serves to “devalue” the yard stick a little of countering with using Calla as measuring stick just because “technically hardest boss”, which that part i agree with grey

I built pierce Rimetongue. It was almost fine, but lifeleech is knd a low and pierce modifiers to Blade Trap is far worse than cold 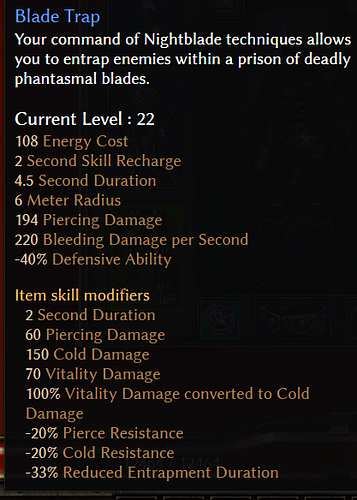 Also I would like to suggest to swap the conversions on the offhand:

Well, I’m personally ok with it being casted on casters. Plus it survived the patch that made Blade spirits perma-pets, so I think devs don’t intend Devils to be the same. It’s specifically on EOR that they become incredibly annoying to me.

While on the discussion about Blade Trap, I really wished devs would take a look at mutations. And I have 1 question, like really… is it INTENDED to “fish” for the right mutations when starting crucible or SR? Because those CC mutations make a huge difference to how well these skills perform. Hell you don’t even need Rimetongue or Mageslayer - I’ve seen purple bosses get petrified from Korvaak’s devotion proc. It’s a pretty big difference. I’ll probably get hated for saying it but I would prefer if they removed both enemy CC mutations so I don’t have to deal with such RNG.

I’d still suggest weakening negative mutators a bit, especially the ones that boost/shred mobs’ CC resists.
It’s not like just deal less damage, it means that your main CC skill (blade trap/olexra EVEN with hourglass and mageslayer) is almost useless.

While on the discussion about Blade Trap, I really wished devs would take a look at mutations. And I have 1 question, like really… is it INTENDED to “fish” for the right mutations when starting crucible or SR? Because those CC mutations make a huge difference to how well these skills perform. Hell you don’t even need Rimetongue or Mageslayer - I’ve seen purple bosses get petrified from Korvaak’s devotion proc. It’s a pretty big difference. I’ll probably get hated for saying it but I would prefer if they removed both enemy CC mutations so I don’t have to deal with such RNG.

I would have to agree with this. I don’t think full removal is a good solution, but modifying the values would help. In it’s current state, depending on which one you hit, your build can feel entirely useless (+ monster cc resist) or completely broken (minus monster cc resist).

The bonus on goredrinker negating bleeding damage made me think about the following; would it be possible to add +max to certain forms of CC to a couple sets or some of the less common devotions? Ex +max petrify or stun resist to vire or +max freeze resist to leviathan