I fully agree with this statement!

Alright, time to discuss Radaggan’s lack of casting speed yet again. But rather than write a wall of text, just take a look at this please: 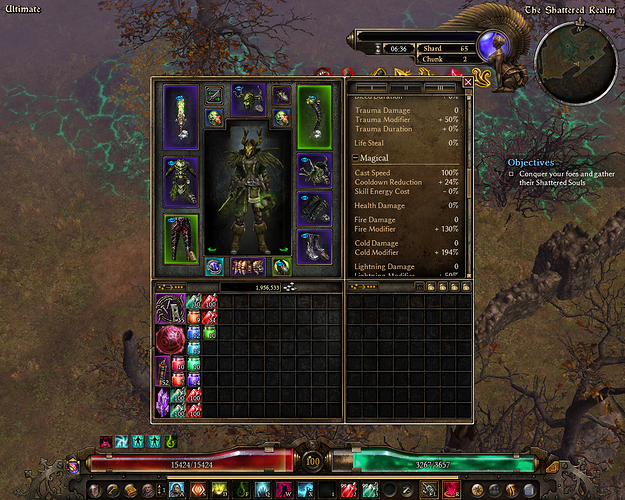 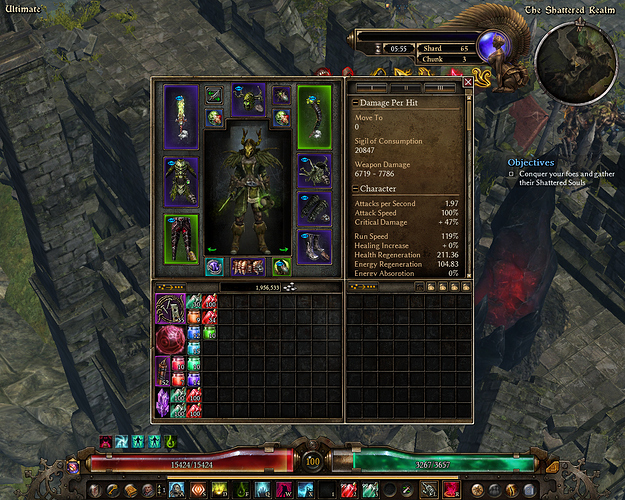 Yes, I got all four speed reduction transmuters which is rare, but I mean my Belgo Blademaster (https://www.grimtools.com/calc/pZrBvv5Z) has 165% CS! That’s with Field Command and Pneumatic Burst, but even without them it’s still higher than Radaggan’s! And imagine being slowed.

If movement speed penalty can be mitigated by boot’s proc, CS you can’t help. Having “zero” CS feels very, VERY bad on piano caster. Oftentimes your cast is interrupted and this can get you killed (SoC not being cast for example). A very sluggish experience.

So yet again: add 10% or so casting speed somewhere on the set! Or gloves. Or weapon (it’s a caster weapon that has DEE support after all).

I would suggest changing your rings, gloves, and MH. My devotion pathing contains jackal and lantern so that’s 11% there I believe.

Off hand, if kept, can be farmed for CS.

Um, my rings HAVE casting speed. I also have CS from Jackal and Spider. And total speed from relic. The only acid gloves with CS are Vilescorn Bracers, and those are for melee, actually. So anyway, casting speed on Radaggan is needed not for DPS increase but for better QoL. For my taste, it’s the only flaw of this particular build.

Yeah, actually was presenting Decree Vindicator in Radaggan in previous discussion thread (well, at least it had ~160% CS).

well, I agree that some acid itemization - Radaggan set itself, Pandemic and Venomfang grips - could get some cast speed. I played Radaggan Cabalist too recently and I was forced to take “of Selerity” suffix on off-hand to get some speed. in-game it was like 170 maybe but the build felt EXTREMELY clubky and unpleasant to play when you have 2 skills (sigils and RE) with low cd, omen, CoF and filler skill to spam, it feels super unpleasant to play.

Yes but there are rings with higher average CS plus you could squeeze out more from the MH and off hand. Checked my character. Sitting at 148%.

To politely clarify my prior post, IMHO, there are other options to increase CS without placing it on Radaggan’s. In my situation, one could ditch the CoS shield for a caster OH, change my relic, farm/craft for CS max rolled items, etc., one could easily hit 175+.

10% deathguard sigils was the alternative ring(s) I was referring to.

Yeah, ok, I get it. Although the same logic can be applied to every other stat in game: have low DA? Just replace some of your gear to something that has it. Have low acid res on Fire Strike Purifier? Just use acid items because they have tons of it. Etc.

Now, out of three masteries that Radaggan supports the only skill that grants CS is Harbinger of Souls. And let me tell you no one’s gonna use it on Cabalist because Possession and if you’re gonna use it on Apostate / Deceiver then you might as well just use some other set / items because main sales pitch for Inquisitor part is vitality Censure.

Like I said, a lot of melee builds achieve a LOT higher CS than Radaggan, a caster set. Does that make sense to anyone? Not for me it doesn’t.

I hear you. That said, it is Crate that has to be convinced. Beyond screen shots and/or single videos, show them that the lack of CS matters. I would accept any change and admit I was wrong about my opinion if CS was added.

Dear game developers, I would like to see information about the game mode in the upper left corner when choosing a character in the main menu of the game, for example, in red “hardcore”. I think that this will not create difficulties for your programmers, but it will be very convenient for experienced players who have more than a dozen characters in different game modes.

On the topic of caster sets without cast speed. The same would apply to the Ulzuin set.

HC characters already glow gold when you select them while SC characters don’t. At least the HC ones still alive do. The dead ones are ghosts. You could also add HC to the end of their names when you create them if you need more indication of which mode you’re playing them in. 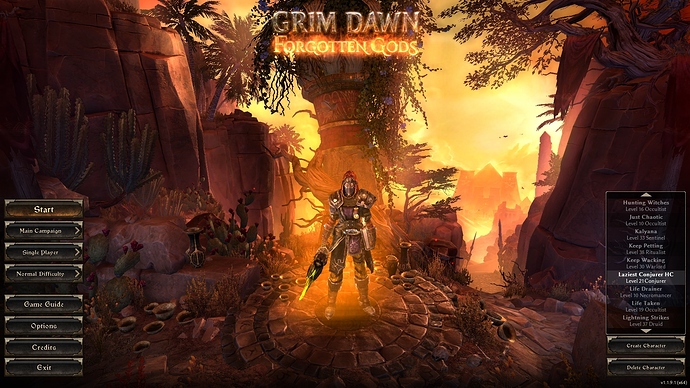 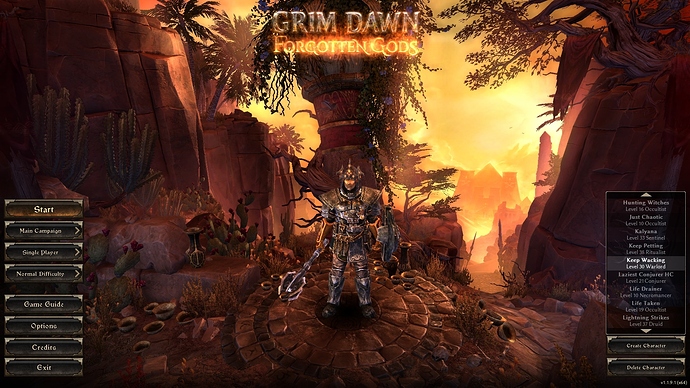 Can something be done for Corruptian? Too many inconsistency in 1 item, part of it convert DEE from physical to acid while also convert acid to physical for RE. Even Cabalist can only utilize 1 part of it on a build despite the item specifically support said mastery. Item already have cdr which is nice but the attack speed there is totally weird as it’s not even look like weapon that acid/physical AA build uses.

I think it’s better to drop the DEE support and give mod for physical to acid on aegis of menhir, so acid aegis have other weapon option than Ravna claw.

Or change conversion to Vitality-to-Physical for DEE for consistent Acid+Physical theme of the weapon. But it does not follow Crate’s grand vision, it seems

. Attack speed is just for trolling, like Massacre axe with armor piercing.

A post was split to a new topic: Crucible v1.1.9.1 change not working

Can Namadea’s Horns get some Arcanist support?
Spellbreaker was my first character and I always had a soft spot for the class, however I find it very challenging to make good builds with its single -RR and squishyness.
Working on this https://www.grimtools.com/calc/wV1OJXwN
Build has good damage but as usual with my Spellbreaker-attempts its very low on phys res and health. Strong Spellbreaker builds are scarce and helms are a very contested itemslot so I dont think it would break the game.

Anyway, always happy with new patches and continued support of this game!

I’ve decided to give it a shot to Ember’s Calling again but with Chaos Saboteur this time;

https://www.grimtools.com/calc/4VxRMKvN here is the build.

The main problem is obviously defense. Damage is quite good, I get good amount of sustain with GG and Bat despite of %7 Adcth and Vindictive Flame also helps a bit but as long as your circuit breakers on CD you’re dead as good or run for your life. Which is a bit weird since this is a melee build, not a hit&run.

Low armor, low physical resist and even with my efforts low health is the biggest problem. I used Aleksander’s Chausses just for it’s health bonus and without that it’s just a bit higher than 10k. Resistance overcaps also a bit hard to get.

What build can do? I did some 75-76, you die in the chunks if you play reckless. Hard to finish without dying especially with bad mutators. Boss rooms are easier since you can wait for your cooldowns till you move on to the next boss nevertheless it’s not likely to proceed further than 80 with these defenses.
My previous SR set Chaos Sabo was doing better than this despite the lower damage potential.
Saboteurs are skill point hungry, defenseless, healthless class and any set center upon this combination should provide these to become an end-game archetype.

PS: Not sure about it’s crucible potential. Afaik @afanasenkov26 was testing his own version of it and expressing it’s lack of sustain and health aswell.

DA is already high and build has good OA shred so I think third set bonus can be replaced with %10-15 health instead %6 DA.
OA should stay though it can be fixed with cunning dump, problem is physique stats is needed to keep health high

i don’t think 15% health is enough, nor do i necessarily think removing the DA is a good idea as it would just “punish” non-sabo ember’s calling toons that don’t default get 3k DA
and even considering touching the OA in favor of a potential cunning dump would be, pardon me, kinda insane, as you’ll desperately want either physique or spirit to make up for the low bonus dmg gained in a chaos effort with NB - when then is even more needed when not going sabo/infil/purifier with dual RR.

Ember’s calling have a fair few decent uses outside of a run-of-the-mill AA chaos sabo, and i think it’d be fair to consider the sets stats for that utilization too, where ex NB brings the mono mastery RR now

suppose what i’m saying is, please be careful in the consideration of tweaking the sets stat for just 1 approach

suppose what i’m saying is, please be careful in the consideration of tweaking the sets stat for just 1 approach

Yes you’re right. I don’t play caster or other archetypes so I don’t know if chaos/fire DEE WH/Pyro needs or Purifier Vindictive Flame with set requires.

But While I’m providing feedbacks, I also consider that the devs will not just give what I need but they consider all the aspects and other possibilities I couldn’t think of and decide then. I also expect other players would argue with me if I’m mistaken or missing a point just as you do.

All I did with the Ember’s Calling set was DW Fire and Chaos Saboteur. Both lack defense and most importantly health. So my instinct is to change some not that important stat like DA with health but as you said it might disrupt other builds that use the set. Let’s keep everything and add some health?

Or maybe having Sabo class on this level is okay for everyone so no need for any buff.