Hello guys! This will be a bit of an unusual build post cause it contains two extra build i didn’t want to make a separate thread of and some insight (at least it was for me) about the state of melee lightning in GD.

The build is a result of a long struggle to make dual Stormhearts work on top tier level. The problem i had is i tunnel visioned into Elementalist - a class with double RR, double lightning focus and seemingly better autoattack. Everything looked so good on paper but did not quite come together - and that is a part where i’ll have a small riddle for you guys if you are interested. I’m not quite sure i solved it myself correctly but i think i have a couple of good guesses. 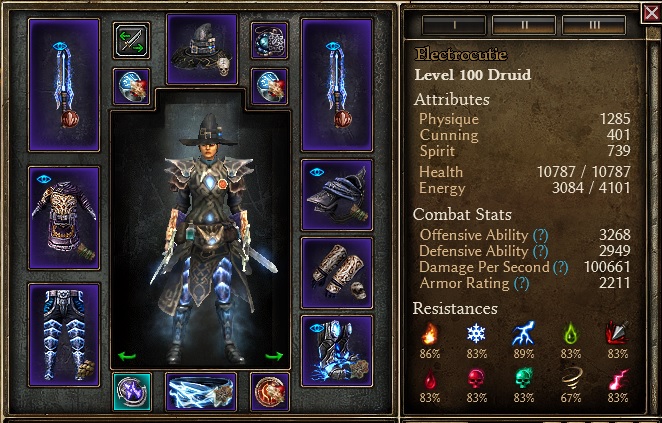 dps is in Savagery

Basically the only two pieces that can be changed are the belt (but it has to be shaman and this one is BiS) and the medal (in here you only have 1 more option to enable DW). The reason for that is you have to cap Maelstorm and Storm Totem AND have both Wind Devil and Storm Totem with 100% uptime for 3 summons.

There is a big shortage in skills, you have barely enough of them to cap Storm Touched. It’s really a shame i had to give up some of the ultimate ranks of it to fit other gear. When capped this skill gives incredible electrocute dmg which is often overlooked.

Other than that - no surprises. It is possible to make a significant spirit dump. But it will hurt either DA or flat dmg (+OA) - both are a big part of the defense and i didn’t feel it would be honest to go for such a risk, record one good run and present it as if it was a stable performance.

I won’t lie, i don’t like spear and i think it was overnerfed. I can’t find explanation for why it doesn’t have electrocute dmg with such high requirements. It gives less dmg than Amatok which is tier2 and much less dmg than Tourch which has lower requirements. And it’s proc is just a joke for a tier3. But it gives 180% lightning dmg. Lightning is not our main but it’s very important for leech sustainability.

I wanted to go for Jackal instead of Ghoul because it opens up some possibilities. Ended up with Ghoul, it’s too important and without it the build isn’t stable.

It’s important to bind Fiend to the devils. Even though it’s a t1 proc compared to t3 Ultos it gives more dmg when bound to a good procer due to low cd and the nature of Fiend hitting a target multiple times. Especially when enemies are grouped up.

In MC focus on the casts. Totem and Devil can clear all of it (killed both Theodin and Korvaak with Devils alone).

In Crucible try to stay near the center and draw all the mobs from the spawns asap. Your main source of dmg - “Devil Fiends” - perfrorms really well against a tight pack. When fighting bosses don’t forget to switch targets. You have several sources of high electrocute dmg and everyone should have a taste of it.

To make the run reliable, don’t hesitate to kite. The casts will make a short work of the bosses anyway. And they will also leech very well. One note - don’t rush into a pack of heavy hitters right away, better makes them come to you. With no instant RR and low WD you’ll have miserable leech and as a result - no recovery from the initial hits.

In SR chinks try to pick out packs of regular mobs. Hero packs can kill you easily. But in boss rooms everything is surprisingly fluid. You can facetank any boss and sometimes two of them.


With Grava and 1x resistant mutator so the conditions are no perfect. But i was pushing for speed and almost died several times.

I’m not sure what’s the limit of the build. Cruci has lots of tough guys with high lightning res, with single RR from the masteries the resistant mutator affect you more and your dmg output is very volatile because of the Devil random behavior and high crit focus.

If someone wants to go for fast Cruci clear i’d make a big spirit dump and ditch spear for DG because it gives more dmg. That’s right, vit/chaos constellation with lower requirements gives more dmg than a lightning does

SR75 clear (several deaths but still way ahead of the timer): 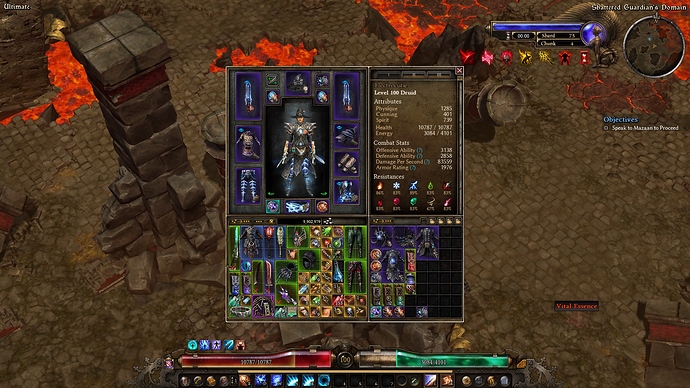 <<< GRIMTOOLS >>>
I had this build for a while but it was overshadowed by another build which utilizes the weapon better. So i didn’t feel like mine deserved a separate thread anymore. Still it’s a fun and very tanky 2H melee build with fast clear time (down to 6:15 with 3+1) and we don’t have enough of those. The only problem is the weapon will be nerfed next patch. 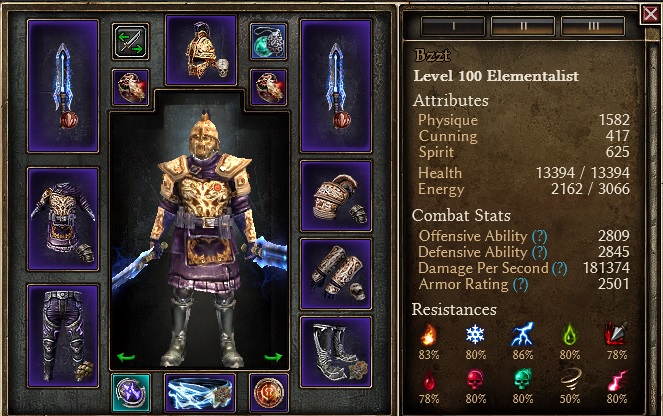 << grimtools >>>
(dps in FS, craft for freeze and physique to bump DA)

This is the only version that was semi-reliable for me because it can afford to kite. Can clear in 6:20 but the average run will be closer to 7 mins.

Druid is so crazy fast and your Elementalist puts mine to shame. Solid building.

Sweet Druid you made there @banana_peel - congrats on that excellent sub-6 minute time.

Take all my hearts.

Congrats! Results are nice for a really wacky build…

BTW, if you hate spear that much, try korvaak. With your current WD sheet, I think it can still be effective in dishing out damage.

Take all my hearts.

But is really interesting how could DW melee be so good. And never thought about DW Druid!

But is really interesting how could DW melee be so good. And never thought about DW Druid!

Tbqh the build is a result of multiple failures of pure melee with the weapons. In the end i couldn’t resist a look into a peephole of the door to caster realm. When i found some OP treasures there was no going back…

casters haven’t always been as OP as they are now due to the lack of sustain in days past.

required just as much skill to pilot as DW melee did, but in a completely different manner.

though, TBH, i think caster’s have gotten more “OP” simply because of how the game is pushing players towards circuit breakers, if you want to do a glass cannon

BTW, if you hate spear that much, try korvaak. With your current WD sheet, I think it can still be effective in dishing out damage.

Yeah, I had Korvaak instead of spear on some other builds with higher WD. Maybe i’ll try it here idk… Still need to find the way to compensate 90% lightning. Probably spirit dump is the solution.

you might lose 90% lightning, but you also gain 90% electrocute

Of course. And it will give more dmg in the end. But we need lightning for adcth.

But we need lightning for adcth.

What a pansy. What a wiener.

What in the meme… Wait, that’s not a meme, that’s a very solid build, great job!

Only thing I dislike is not capping Heart of the Wild. 15% hp for just 5 points seems worth it give that build doesn’t have much hp to begin with.

Yeah, it’s one of those things where you can bump your defense if you are feeling uncomfortable. Nice to have at least some leeway for people to adjust to their likings if they wanna try the build out. The gear selection is very restricting.

If you are feeling adventurous, try the 4xlvl1 lightning towers suggested in this awesome build (or on any of your lightning build for that matter):

[jon-siva-sorceress-online] My lightning Sorceress, actually no but nice art. And she’s fast like the speed of the light! [050115_Whyisitso_1] Introduction So some builders tried to place 4x level storm beacons in Crucible and that lead to decrease of time. For some build is noticable, while builds with low OA for example are way better to stick with Vanguard banner. But I wanted to try build specifically aimed to utilize fully these beacons. So here it is, lightning Mortar Sorc. So cred…

@sir_spanksalot What made you think it would work? I thought it was believed that elemental towers are crap. Turned out they do a lot of work.

Do you know more about how they work? I tried fire ones, they aren’t that good. Does lightning beacon only do lightning dmg or electrocute also? If only lightning i might try it on my Blade Arc Tactician cause AoE is what it is lacking.

You can look them up under the monster database (it’s a bit unintuitive, but the categorisation makes sense since they don’t scale with player stats)

Inferno beacon sucks because of the range. So you’re leaving problem one unsolved.

So gathering all the nems in the center and having beacons go at them actually do add up.

What? 35RR? Lmao. I had no idea. Why do people not use it every time they can? Good find, sir.