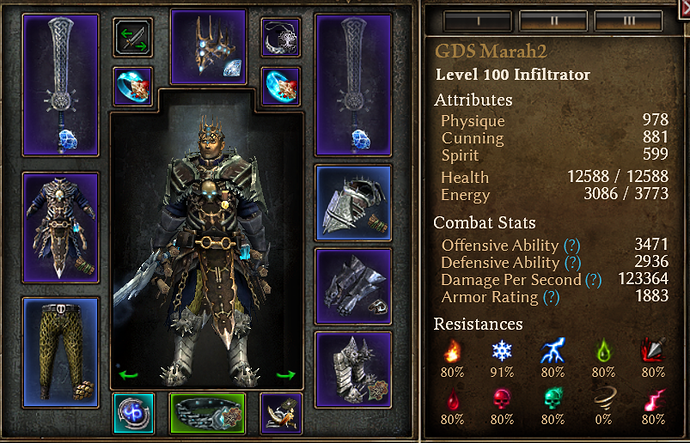 Here’s a concept that’s a compilation of some of the most prominent concept ideas for cold this patch: support from 24/26 Chillwhispered Blade Spirits and converting Scales of Ulcama for sustain (both demonstrated by @thejabrixone here). The result is quite pleasing: the SR setup does 75-80 no problem and still maintains the lower 5-ish Crucible times on an average PC. Despite lack of stun res which is made up for by passive sustain from Scales and Bat bound to Storm Box of Elgoloth.

Building SS is a chore as there is very limited accessibility to NJE (second node) ranks, and hardcapping them to 22/22 is an absolute necessity for (imo) every SS build. Therefore, most SS builds depended on dual-wielding Loxmere’s Frostblades which nets the coveted 4 ranks. This combined the fact that with Morgo - the SS set - is purple MI (so are BiS cold rings lol) makes SS builds quite hard to put together. However, since the buffs to Winter Bane 2-hander, this became a very competitive concept (as demonstrated by @banana_peel here). This one goes a notch further, loses Morgo set (imo overnerfed, arguably, though) and manages to hit the 24/26 break point of Blade Spirits with 100% pierce to cold from Chillwhisper helmet (@Zantai please don’t nerf this).

Build is also working quite well as spellbreaker and trickster with little to no modifications to gear and devotions.

We bind SS to left mouse and use it as if it was an autoattack. It basically works like Cadence and Blitz in one. To right mouse - second most important skill - ABB. Usually we SS, ABB for the buff and RoH for the quick and sure Elemental Storm and then go back to holding SS. Bigger enemies get Box which will provide great sustain when bound to Bat.

Build has monstrous sustain but it is still a caster glass cannon and can get one shotted easily or go down to zero in a fraction of a second. It won’t be facetanking multiple bosses. When swarmed, disengage, maybe wait for some debuffs to cool off, and attack with a new SS in a spot where it’s safe. An advantage of this build over Morgo is that it’s not just DoTs but also Blade Spirits that keep dealing dmg while you maneuver.

Lack of stun res is a big thing. Current endgame is imo overloaded with cc effects. Buffed Crucible is not a problem unless Iron Maiden shows up with Valdaran and another fast nemesis. Iron Maiden might also be a problem in SR80 as the sustain from Scales and Bat might not be enough when shut down by her stuns. But unless you speedrun and insist on factanking everything and not giving an inch it’s not really a big problem.

thx for reading
and all questions - about gear, devotions, anything - more than welcome

So after SS support on Morgo was nuked you just get BS via chillwhisper and equip the slightly op sword? I’ve almost seen that coming

This is really nice, I like the cunning investment to get consistent OA values. I would probably go for a sanctified bone in the body armour, though, because Moosi, Reaper and Grava grow exponentially cancerous in higher SR shards.

Very good build, ya1, keeping up with the meta with all the meta items/skills and devotions.

This. I find armor absorption with this amount of armor less important than additional damage/adtch against Reapers/Gravas of this world.

Right, I didn’t think about that. The last setup before this lacked elemental resistance so double Living Armors were best. And infiltrators always need oa. But on this one Bone might be better overall because of more dmg.

This. I find armor absorption with this amount of armor less important than additional damage/adtch against Reapers/Gravas of this world.

It’s true but I do not necessarily agree with this in this particular context. Here, leech is already very good. Not much can outdmg him, really, in the long run. The problem is one-shots on relatively low health (though here is high for infiltrators) and low phys res. So every little reduction to dmg taken is good.

They do but more dmg won’t really help you much (defensively) since you won’t be bursting them anyway in SR.

(credits to whoever came up with the Scales thing first, was it @grey-maybe?)

I’m more than sure, that the first ones were some chinese players, however, we didn’t know about them. I simply came up with the idea to use Scales wherever possible. Scales are new Ghoul.

I’m more than sure, that the first ones were some chinese players, however, we didn’t know about them. I simply came up with the idea to use Scales wherever possible. Scales are new Ghoul.

Without Ghoul, though, lack of the 15% phys res boost is noticeable. But I love it how scales - outside one-shot bursts that cannot be out-leeched - allow for stuff like zero stun res.

Is there any way to make this build even Tankier, more suited to HC?

I’ve started playing in HC recently, and because Infiltrators are my favorite to play, I really wanted to build a successful one in HC.

Even though he sustain on this is great, I fear the low HP pool.

If you have the time to help me out, what stuff would you change for HC? Or do you think it’s fine as it is?

Is there any way to make this build even Tankier, more suited to HC?

Full physique dump, Blade Barrier, give up on hardcapped NJE (but seriously don’t…) and use some boots with cc res and health like Stormtitans or sth. Give up some ranks somewhere and pump up Vigor. Sadly, the Blade Spirit thing takes too many points to take Seal so do not approach the likes of Lokarr or Morgoneth on HC, and other things that got machine guns and multiple sources of dmg.

But honestly, I do not recommend this for HC. Hard to guarantee 100% survival.

Ok man, thanks for the quick reply