I have already made an aether Primal Strike Ritualist and I noticed that its melee version can be easily redone as a Druid if you use as a weapon Lucius’ Blade Arm. It requires some greens because of lower item support. Build has no RR from masteries but it still works with RR from other sources. Lifesteal is decent but it is necessary to have large enough health pool to absorb attacks. I have not changed any item in this build from its Ritualist version except the weapon. Medal for vitality PS is still better here than any other medal if you have my affixes. My previous Ritualist version is a little better in both offense and defense. This version can do SR 80.

All crafting bonuses are to physique. You want affixes on greens to aether damage, OA, DA and resistances. Most affixes are interchangable. Prefix bonus for Primal Strike on medal is not necessary on the melee version (I just chose it as the best option). If you want it outside of the medal, you can get it with a second ring. Because of bonuses to PS from medal and amulet you have to equip the amulet last always for aether color of PS. At each new session you have to do this because it defaults to medal and not to amulet.

image from the game with passive buffs + Blood Pact 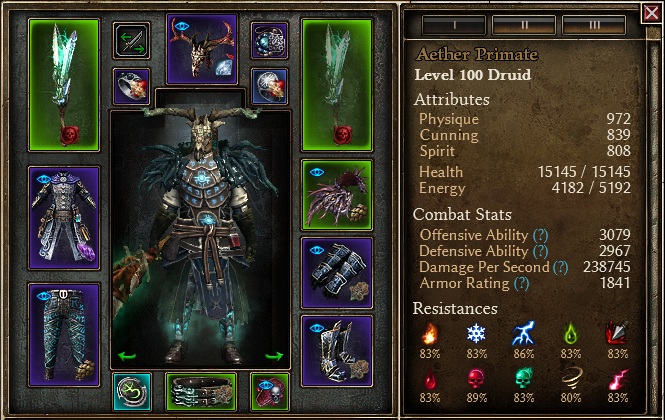 This build does SR 65-66 easily. It can even do SR 80. No boss is particularily problematic but be careful with Reaper and it is also harder to heal from Valdaran sometimes. It is slower in SR 80.