The idea behind this build is to only use green items to make a Primal Strike build. I also hate using Savagery as a buff - so build is without it. As a second class I went for Demolitionist because of resistance reduction, total speed, flat damage, OA and DA bonuses. Core of the build is Korvan Storm Halberd. Monster Infrequents were chosen in such way to fix things in the build (resistances, additional bonuses to skills etc.). Build does SR 65-66 easily. It can even do SR 80.

BUILD IS FOR GDSTASHERS ONLY because of crazy double rare items that can not be realistically found in the game!!!

Two crafting bonuses are to freeze resistance, one to slow resistance and one to energy regeneration. 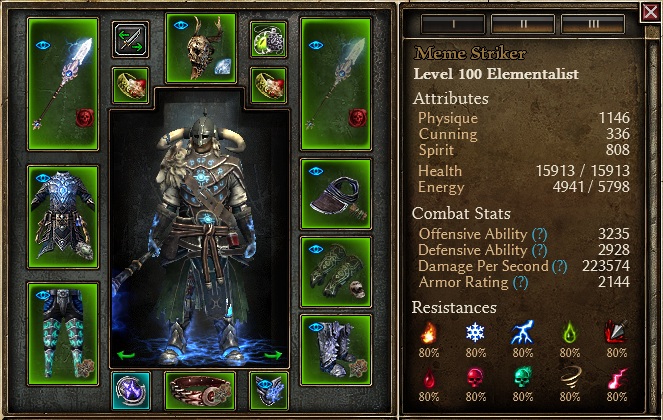 image from the game with passive buffs + 2x Insight proc 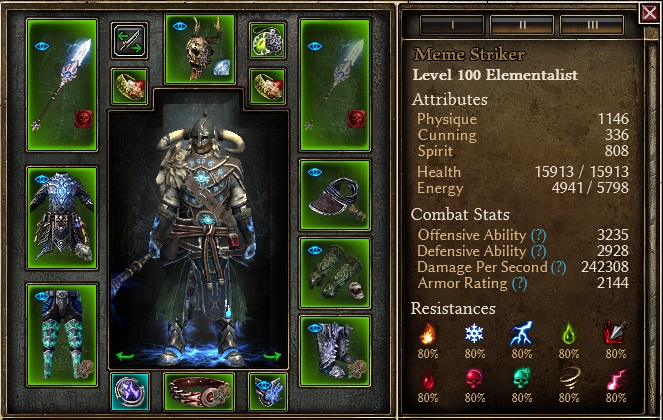 Build does SR 65-66 easily. In SR 80 it behaves like a glass cannon so be careful in it. You can fnish it often but performance will greatly depend on your skills. Don’t be too lazy with this build or you will die. It kills fast but you can’t tank everything. Getting nullified is an instant death sentence. Physical hitters are dangerous. Avoid Benny’s and Kaisan’s crystals and also Aleks’ meteor.

Why Demo as second class and not something like Occo or inqui? Your thougts about the pro and cons of different combos?

I play without Savagery, so I need to get OA and DA somewhere. Demo has them, also has total speed and I don’t have to use another exclusive skill (aura of censure) so I can use Stormcaller’s Pact. And I also went for HP regen. Demo allows all of this. The other two classes wouldn’t allow all of this. Not that they would be bad, you would just have to do it differently.

Very cool, I am a beginner elementalist in the game which build do you recommend?

If you are a beginner then this build is not for you. It is solely for those who use GDstash because this build is unobtainable by normal playing. I don’t know much about beginner builds. @Nery or @Stupid_Dragon might help you.

I found this when searching the forum [1.0.4.0] Beginner's melee 2H Lightning Elementalist