I have decided to add another damage type of Primal Strike to my collection. This time chaos Primal Strike. Because of chaos damage support I chose Conjurer. For chaos RR I took the Rah’Zin’s set as the core of the build with Wrath of Tenebris as a weapon. For bonuses to Primal Strike I have chosen the Rylok Mark medal which has conversion of lightning damage to vitality. PS thus has major chaos damage and minor vitality damage but that is OK here because the build has % damage to both and some RR for vitality as well. Any other medal I tried gives significantly less DPS (20 - 30k less). And you also get nice red look for PS with this medal. Physical damage on PS is converted to chaos. Lightning damage on Torrent is converted with partial global conversion to chaos. DPS is up to 250k with chaos RR of up to -123 %. So offensively build is fine. It can do SR 65-66 comfortably but it struggles in high SR. It becomes squishy there just like Rotgheist PS builds even though it has good defensive stats and great lifeleech. You will have to use energy potions from time to time (especially in boss rooms) but that is a problem of Occultist class in general from my observation. This build should be comparable to my aether PS Druid. And yet again when having similar aether and chaos builds the chaos one is weaker.

Bonus ranged version for SR 65-66 is here. It is squishier and has weaker energy regen. 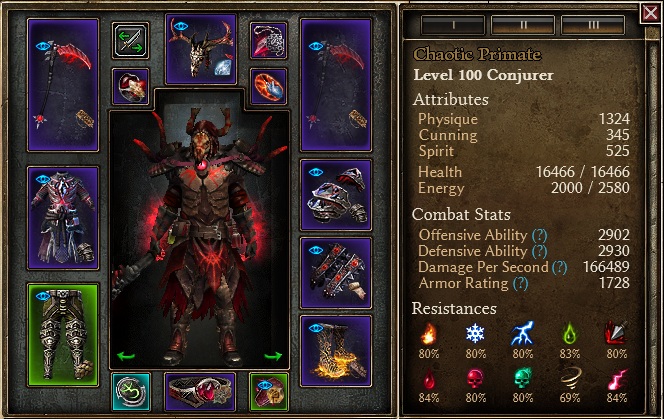 image from the game with passive buffs + Blood Pact, Abominable Might and Hungering Void 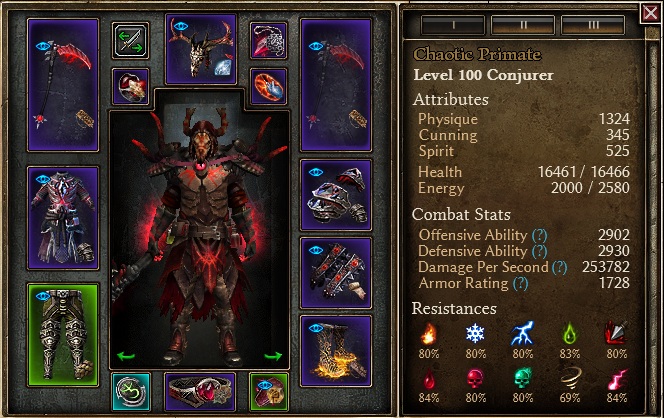 image for Primal Strike damage with all buffs 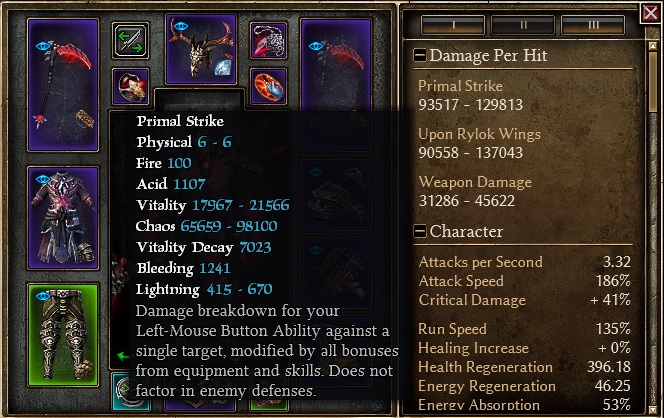 This build does SR 65-66 relatively easily. No boss is a problem. Energy regeneration in boss rooms is weak (have some potions). It can’t do SR 80. It is too squishy in it.

I have both melee and ranged for SR 65-66. Maybe soon but I have so many stuff to post