The reason behind this build is to use Stormrend axe from totems + shield for Primal Strike. This time I chose to use Blitz with it and therefore used a Warder. Primal Strike hits hard even with one weapon, added to that we have two movement skills - Blitz and Masterful Rahn’s Might - with which you can avoid getting hit if needed. You can facetank most of the single boss enemies even in SR 65-66.

Crafting bonuses on helm and medal are to stun resistance. To address the coming questions - component on the belt is chosen for OA. 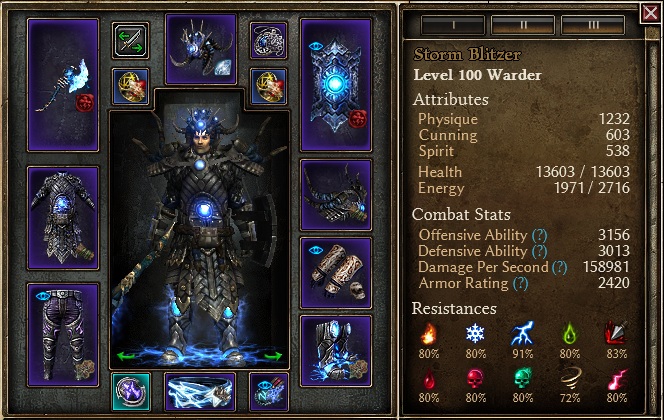 image from the game with passive buffs + Fighting Spirit 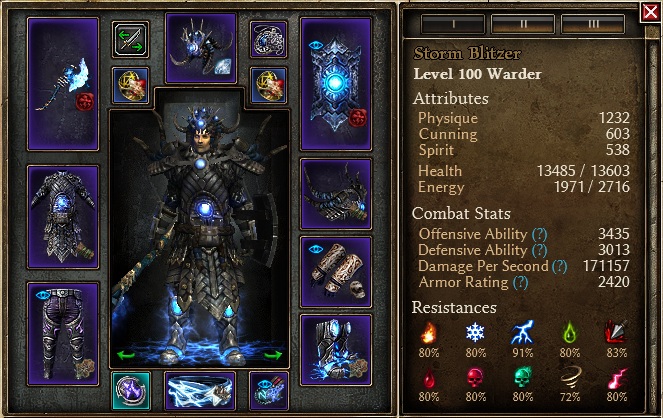 This build does SR 65-66 relatively easily. It doesn’t even have any great problems with Grava which melee lightning builds usually do. I tried SR 80 with and it is too glassy for it.

and why not taking Overguard (instead of Blitz, probably) as a save ability? It also provides a small but useful amount of damage absorb.

Amazing build
Thank you for your imagination

I don’t like the skill much. I wanted to use Blitz. It damages OK (nice AoE and sigle target) and DA reduction is useful. And the build has nice CDR. I can use Blitz every 3 seconds. With 19 % lifesteal I can do SR 65-66 OK. Perhaps for higher shards you could go with Overguard. When I play with shield builds I always play offensively and not defensively.

Would making Mogdrogen’s Pact a one pointer and maxing out Military Conditioning and then taking out say 40 points off Physique and putting then into Cunning a bad idea?

If you can manage energy requirements of PS then it could be done. You will have to try it though.

Alright so MP is there purely for energy regen?

Yes, mainly because of that. It could work the way you said https://www.grimtools.com/calc/4Vxk5EE2 but I put them into spirit instead of it.

Cool ill try it out and see how it works, thanks for the reply!