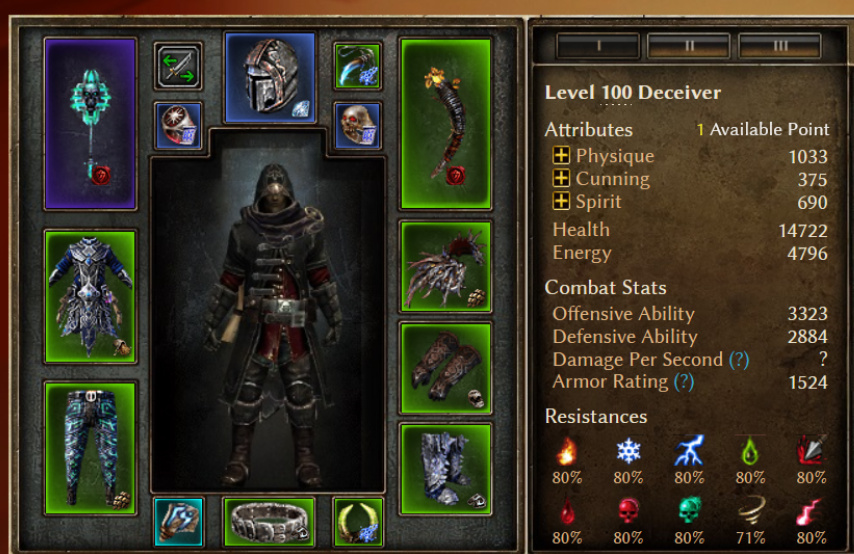 Among many beginner guides on the forum there are no Deceiver ones, so today we will fix this unfortunate accident.

Deceiver (Inquisitor+Occultist) has quite a bad reputation, both masteries are known for being good support masteries lacking strong offensive skills. Furthermore even if Occultist has elemental RR the mastery has no other elemental synergy thus rendering the most obvious damage type choice to be mediocre. So even if defensively Deceivers can be built to be practially unkillable the lack of offense swayed builders of the class.

Recently the class was receiving more and more MI-support with Storm Herald allowing to build interesting lightning doombolt/stormbox caster; Abaddoth sermons supporting chaos sigil/kalastor builds and Blugrug axe/Leafmane trophy supporting various vitality deceiver builds. Any of these three new toys can be used to make a decent beginner build but I decided to choose the third option among the three. Vitality deceiver is the most unkillable of them and thus will probably be a better choice for a complete beginner. Furthermore the abundance of defensive layers makes this character really suited for hardcore playthrough, being able to safely stand inside the Inquisitor Seal and outheal incoming damage is a strong point of Vitality Deceivers.

The combo of Blugrug’s axe and Leafmane Trophy gives us 100% elemental to vit conversion allowing for a wide range of setups, any inquisitor skill can be used as the main weapon. I decided to use Flames of Ignaffar because of its high lifeleech that will fit the build perfectly. The channeling nature doesn’t hurt us that much given that we plan to stand inside the seal anyway.

This build has an insane amount of defensive layers, we have access to them all. Inquisitor seal provides large amount of flat absorb (we are able to hardcap it if we want) making you invincible against small attacks, Horn of gandar provides damage reduction, our physical resistance is higher than what is achievable by most builds (70% with Aura of Conviction version and 55% with Possession version of the build), we take less damage from 2 out of the three most scary enemy types.

Note that each additional defensive layer makes your flat absorb even stronger, there are very few things we can’t simply facetank while standing inside the seal, the only thing we are truly afraid of is being dispelled by an Arcane enemy but obviously it’s something any build is scared of. On top of everything we are a vitality build and our main damage source has large amount of ADCtH so even when something damages us we are back to full health almost instantly.

Very often the words “hardcore-friendly” don’t mean much given that whether or not build is hardcore viable depends on a player, but in this case as long as you keep your buffs up and stand inside the seal you are practically invincible, even during SR farming.

We have access to skills giving poison, vitality, chaos, aether and elemental resistances. This shouldn’t be surprising for a class composed of two support masteries. Obviously this is not a big deal for someone who has access to all items, but for a first character it may be harder to cover all resistances. We will have no issues with it, allowing to be more flexible in our item choices.

This build doesn’t require precise skill rotation and deep mechanic knowledge. You need to 1)Renew world of renewal, blood of dreeg and horn of gandar 2)Stand inside the seal. The beauty of stacking all defensive layers is that things which would kill other builds will barely scratch us and then be healed back instantly.

Not a true pro of this build but not a con either. Despite our efforts to be unkillable the damage is fairly solid, the endresult has around 200k sheet dps (140k with flames of ignaffar and 60k with Stormbox) which is dealt in aoe. These numbers are nothing to write home about for endgame builds, but they are on a high end by beginner build standards. Another tank beginner candidate, vitality conjurer will be much less damaging in comparison.

Not sure if it’s worth listing since any truely beginner build has it. The items we will be using are all target-farmable, in fact most of them will be vendor-farmable which would let you get above average rolls on them with ease.

The build has a lot of buttons to press. In fact you will be forced to remove potions from the hotbar and use a dedicated hotkey for them (go to options -> hotkeys if you didn’t know about this feature). As a minor solace, it doesn’t really matter how do you press your buttons, they are not timing sensitive, as long as you renew your buffs and debuffs once in a while and hold your ignaffar key you are good.

Some of our skills are a bit inconvenient to use. Ignaffar is short ranged and the spread feels a bit thin (I wish there were some QoL buffs in this regard), inquisitor seal has low casting range so it makes it awkward to use as resistance reduction. You will quickly get used to it though.

Just like any other class not involving Nightblade, Oathkeeper and Soldier masteries we do not possess any movement abilities apart from the medal augment. Obviously the same is true for half of classes in the game yet it is something worth mentioning. Your first character will need to do some component farming (ugdenblooms, aether crystals, seals of binding) and we aren’t fast in doing it.

To achieve the best performance of the build you will need to farm the Decree of Malmouth. It is a simple farm (you expected to take around 19 runs) and can be done on elite, but it’s still something which can be boring for some. We still have it easier than builds that do need to farm Krieg or Dark one and we can use well-rolled Blugrug’s axe if you are too opposed to farming. Some of the axes you can get are not that much worse (if you get Wraithbound Blugrug’s Axe of Insanity the physres and casting speed would be a big plus for you).

Deceiver is not a very popular class, so even if our beginner build is already capable of farming SR65, if you want to go further with a vitality deceiver you will have to make your own builds.

And that’s it, I wanted to thank Stupid Dragon (for his builds and useful guides), Ulvar (for discussion and the guide template), RektByProtoss (one of whose builds made me start toying up with deceivers).

Nice build and nice write-up! I like the introduction part and the pros and cons.

Congratz with your first beginner build!

Mfw I’m workin on a Warder and Ulvar posts one, now I decided to try out Deceiver and surprise - one gets posted a day later

Thanks, I am glad beginner-guide veterans enjoy them, I plan to make more!

Mfw I’m workin on a Warder and Ulvar posts one, now I decided to try out Deceiver and surprise - one gets posted a day later

Oh, did you want to make it a vitality or maybe elemental or chaos instead? Somehow even though deceiver isn’t the greatest endgame class I felt as if there are dozens ways to build a SSF one.

Also, by any chance are you planning a SSF caster shieldbreaker? I am planning to do that one next (Nery has a great EoR shieldbreaker but I wanted to do a canister bomb character instead), now I should be afraid that somebody is goind to post it tomorrow

Oh, did you want to make it a vitality or maybe elemental or chaos instead? Somehow even though deceiver isn’t the greatest endgame class I felt as if there are dozens ways to build a SSF one.

Chaos, and not even FoI. It was completely cronley bandit draft, lee would jail me if he saw.
Yeah, I can make like 3 different Deceiver builds but I’m still reserved because I don’t really consider Deceiver an either strong or popular class. I was actually interested in testing waters if an unusual, non cookie cutter build can be somewhat popular, but since you posted deceiver I’ll postpone mine and use yours as a lab rat instead.

Also, by any chance are you planning a SSF caster shieldbreaker? I am planning to do that one next (Nery has a great EoR shieldbreaker but I wanted to do a canister bomb character instead), now I should be afraid that somebody is goind to post it tomorrow

Nope, Shieldbreaker is a class I kinda dislike, and can’t even say why. I have similar builds in mind, but I won’t be doing them anytime soon. In fact I got swept away by the mood again and levelling an Elementalist atm, since turns out it’s not that bad of a class, diverse enough and it has a certain fanbase. Also gotta finish the Reaper (formatting sigh)

EDIT: iirc Nery’s plans are ranged purifier, not sure about Ulvar.

I am not sure either. I think my next SSF char will bleed whitch hunter based on Bleeding Witch Hunter (with Crate kill video) but tbf it will mainly be for my own “ego” / “amusement” primarily

But it’s spam jacks which is a stupid choice, it’s unlikely you’re doing the same

He is called Stupid_Dragon though

But it’s spam jacks which is a stupid choice, it’s unlikely you’re doing the same

I guess it’s fine then.

I was looking at doing a beginner gunner build and…yeesh, the options are very slim. Purifier with the passthrough crossbow is probably the best/only option that doesn’t involve just 75% random drop magic gear

I was looking at doing a beginner gunner build and…yeesh, the options are very slim. Purifier with the passthrough crossbow is probably the best/only option that doesn’t involve just 75% random drop magic gear

Pretty much one of the reasons I stay away from beginner ranged builds after making a tactician gunslinger ages ago, and even that relied on using gamblers to get havocs of all things. Overall green MI pistols are caster stuff mostly, and MIs available are the centerpiece of budget build making these days. There are Rutniks, but all my drafts with it were looking very non-cohesive.

First, you can buy (vendorfarm) a Conduit of Runic Whispers blueprint in the Tomb of Heretic (can be done on normal, but you have to be lvl94). Ideal bonus is getting -vit res to stormbox but any neutral roll will do.

Grim tools does not show this as a possibility, it shows -phys res. Has something changed in the last patch and what would be the substitute?

Grim tools does not show this as a possibility, it shows -phys res. Has something changed in the last patch and what would be the substitute?

you removed yellow 2 times, i assume the second time it’s another crossroad to remove.

got this on my first ever ride through hardcore. Got to Krieg on normal at level 24 (i’m a completionist). I face tanked the bastard like a pro. Love the build so far. Never thought word of pain is such a cool skill! I am almost sad that i will have to switch to other skill at lvl 50.

how should i proceed with the factions? Order of Vigil or Kymon? Outcast and Barrowholm friend or foe?

In general, if it is not stated in a guide you should assume it does not matter.
However, you can see that build presented uses anasteria pants, which you farm if you are hostile with her. And Barrowholm you always side with unless you wanna farm Reaper and Namadea in maincampaign instead of crucible/SR. Barrowholm have good augments which you can see be used here.