With 1.1.9.0 various Monster infrequents items were buffed, two received a special treatment and got modifiers to Menhir’s Bulwark similar to Sunherald’s Claymore. As currently one battlemage ([WIP] Beginner's Lazy Battlemage Diary) using the buffed Fleshwarped Core is levelled, a Sunherald Claymore ([1.1.9.0] Beginner's Fire Blade Arc Commando) guide already exists, only Alkamos’ Scythe is missing. After finding a nice one while levelling my last character, I theorycrafted a build using it and was positively surprised by the sheet damage. So I decided to level an Alkamos’ Scythe blademaster.

As the character uses two harder to get Monster Infrequents (Alkamos’ Scythe, Kubacabra’s Chausses), it might be questionable to call it budget build, but with normal luck a good Scythe can be farmed at higher levels, and there is a fair chance to find Kubacabra’s Chausses without farming that much. In fact, the used pants in the final build were the first chausses found in Elite. However, the gated way to Alkamos’ Scythe, paired with the relativ rarity of Skeleton Keys at the beginning and the 50% drop chance of the Scythe might delay the move from physical Forcewave to cold damage. While levelling this character, I had rng lucky and found my first Scythe the first time I tried it. The currently used one was found after 12 runs (counting all runs on all difficulties).

While showing an impressive damage output, the character feels weak from time to time. The killing speed is rather good, as long as the cold resistance of the enemy is not overly strong (will happen from time to time), however, the main issue is that the character depends seemly rather strong on Attack damage converted to health (Adcth). As long as enought damage is converted to heal the character all is fine and the character feels rather immortal and is a fun build to play, but from time to time, the life goes down really fast and a quick death happens. After having no issues at all in Elite, having this issues in Ultimate was a small surprise. Well, perhaps it was also not the best idea to play such a character after playing a sturdy S&B Battlemage.

Only self-found equipment and self-found crafting materials were used while levelling. Also, no mandates were transferred, writs were bought as soon as possible. However, all necessary blueprints were already found with earlier characters. The character was played solely in 1.1.9.0.

Grimtools of the current character. Attribute points are distributed between Physique, Cunning and Spirit. Points in Physique to raise the defense ability, Cunning to have an accaptable offensive ability, and the rest in Spirit to increase the damage. 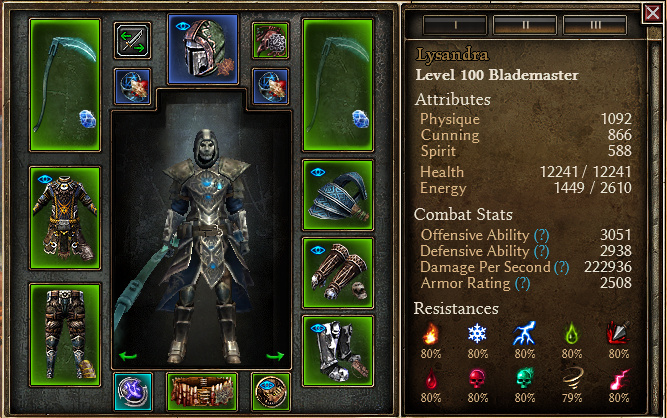 Using the same components and affixless gear, it is not possible to max all resistences, so the exact layout will be gear dependent (skeleton character).

Go Farming: The character is able to farm totems, some challenge dungeons, some nemesis and low shards in the Shattered Realm in ultimate (however, this relatively fast). Some endgame 2-hand cold Blademaster can be found in the Build Compendium X (Forgotten Gods).

Because reading is fundamental, I saw the title of this pop up and my old-grognard brain read BUDGET and ALKAMOS only, and I nearly spit my coffee because THERE IS NO F’IN WAY YOU GET THOSE RINGS ON A BUDGET.

Then I went to remedial English class and learned the error of my ways.

OT: Very nice! I love these budget builds. I actually used one of your’s (or a bastardized version of it) in the new season because my first to HC Warder’s died horrible deaths at the hands of those pesky enemies running wild in Cairn. EDIT: To clarify, it was your paladin build, i decided to take a break from Warder.

Will add to my compendium later today

I would probably go for at least on point in Fightning spirit, and one in markovian and zolhan, as well as getting 18/16 cadence

Thought about it and the initial concept even had such an investment. As most of the group damage comes from Blitz / ABB and the devotion proc and while one pointing the WPS would increase the in between damage, I found the loss acceptable, but it is surely debatable.

The reason was more or less that I needed more points elsewhere than expected (e.g. I had not expected to have Scars of Battle at 7/8 - but I had the impression that small stuns really hurt the flow and are a real risk for the character), and the WPS were the easy victims here for me.

I was also really undecided if I should go for 18/16 Cadence or move the points to ABB / Blitz - my intern rng decided for Blitz. No point in Fighting Spirit is a “not logically explainable” preference from my side, so I have no real justification for this non-investment.

No point in Fighting Spirit is a “not logically explainable” preference from my side, so I have no real justification for this non-investment.

You seem to never pick this skill

I understand the reasoning for not using Markovian or Zolhan though.

I really want this Mi to have ABB mod on it. Something like “+100% Skill Cooldown Reduction to Amarasta’s Blade Burst” 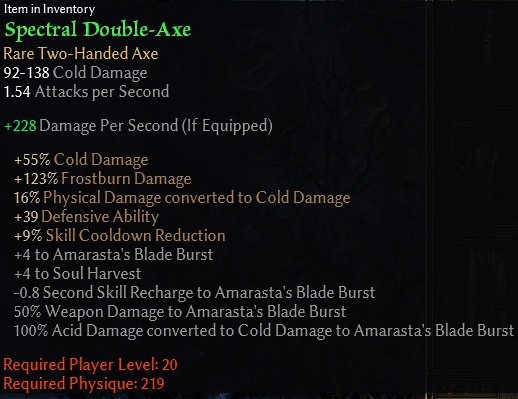 Has anyone tried to make a cold FW build with that Mi?

Not sure if it’s worth it over Mythical Bane of the Winter King (and farming good affixes, with i.e. Casting Speed, on it).
There’s a conduit for Cold FW that converts Physical / Pierce to Cold already
so that additional Physical to Cold to Bulwark is not really needed and you can go for Oleron.

You could say you’d like to convert Acid Damage on Lethal Assault but FW is a ranged
skill so having to approach enemies to hit them with ABB would greatly reduce QoL,
although maybe you’d like to be close because Veil of Shadow has limited range…

I’ve recently made Aether version with a similar green weapon that provides additional Physical to Aether conversion to Bulwark. The thing is this weapon was the only option I had to convert the whole bonus Physical Damage on FW as there’s no Aether FW conduit.

A cool way to use this weapon is Voracious Reach fake spinner ( Yugol’s Hunger ):
A quote from a person that did it: “Also used alkamos scythe with yugol relic + blade spirits on Blade master = sub 430”.

Yeah, maybe with great affixes it could outpeform Bane of the Winter King, haven’t checked

& now we can have some gimmick cold meteor shower

Someone on the discord put a GT link together using an Obsidian War Cleaver with Cold + cast speed affixes and Galeslice’s medal on Commando to convert some of the extra base Chaos damage, was pretty smart.

Yeah, maybe with great affixes it could outpeform Bane of the Winter King, haven’t checked

I had this planned, with items I do have

https://www.grimtools.com/calc/RZRwdGON it will probably not suck, but not be good LOL