Tired of dual-wield and two-handed melee combat? Want something durable but retaliation feels like a snail ride? Boy, have I got just a remedy for you, then.

At first I considered such a build a meme material, but it turned out really good. It was pure delight for me to play with this character.

Be warned, though, as this build requires one/two green MI items and one Legendary MI, and a lot of other items are pretty much set in stone.

Now to the build itself. 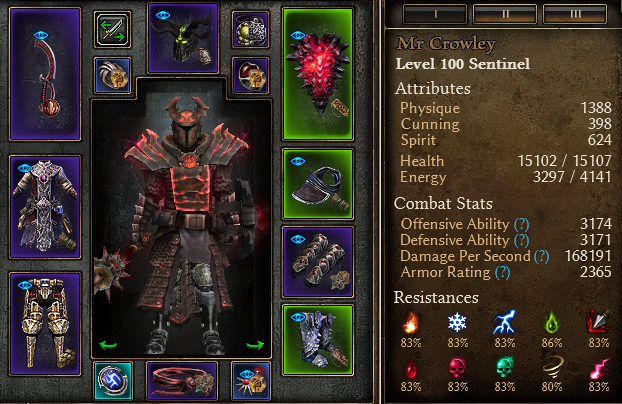 Stats with all perma buffs, Ascension, Hungering Void, Abominable Might and Righteous Fervor stacks. DPS is for RF.

This is your typical “mace to the face” build with decent damage and survivability without resorting to widely abused defensive mechanics such as Ghoul, Bat and Prismatic Diamond.

Mostly thanks to gear, it can achieve 100 chaos RR. WPS chance totals at 70%, but all three WPS skills (Smite, Shattering Smash, Burning Void) are multi-target, so it’s pretty good regardless. Attack speed is capped or close to cap (depending on rolls).

CC resists are a quite a problem here, though. We get a little bit of them from gear and constellations, but everything else should be found on affixes/crafting bonuses.

Here’s a short video-demonstration of one of the SR runs:

Nice, I had made a version using rahzin set but hadn’t tried the chaos RF approach, will give this version a test.

Also pssst, check out chronomancer prefix for the shield

I did! You can get up to 25% CDR on a melee build with that, which is tits and all, but you don’t get phys res that way. But that’s definitely a great option.

I actually have that shield legit, now I got an idea what do with it!

Yep, they are! Boots I crafted a year ago or something, and surprisingly wasn’t able to fit them in any other build. Of Valor suffix on the shield is probably the best one for this build.

Btw do you know this, If I use seal of void in shield, will there be extra chance to proc that WPS or not?

It does proc from the shield as well, did some tests with just seal in shield

I would say Cabalist is the best fit, although some dark magician like Warlock will do it as well.

@XandeRoot got the name from the song I guess

Maybe but Tenebris weapon looks like Hidan’s from Naruto.

Absolutely right you are!

Hm, I only have chaos Stun Jacks Pyro with RagNadar’s Maw, if that qualifies XD

Nice build and great results!
I am working on something very similar but focused more on defence and wps damage.
Still cannot find time to finish it and I had the same problem with celestials… Died once to Mogdrogen in 2nd stage and went hostile with Scorv club

Too bad that obelisk devotion change messed up my configuration so I have to change it all.
Any thoughts about bloodlord blade? With nice rolls it could maybe work but I haven’t found anything interesting yet.

Any thoughts about bloodlord blade?

It’s an okay weapon, but I don’t think it can compete with Fang. Not on Sentinel at least. Your best bet would be to get Chronomancer’s shield prefix, as eardianm suggested.

But honestly, I didn’t feel like this build needs over-the-top defences, unless you are playing hardcore of course. The only thing I would like to have is damage reduction. I was thinking about Empyrion, but this without Abomination you lose too much damage.

As for Mogdrogen, I tried to boost my OA with Elixir of the Dranghoul and Elixir of the Ancients which give 80 OA, but that wasn’t enough obviously. So I guess you need 3.1k OA before pharma and Ascension.

I think that OA is the main problem for celestials as well. My build have 2.9k before ascesion and a lot of rr depends on crits.

I know that you don’t need that much defence but it’s my first toon that I’m trying to make tankier than it needs to be (3.7k armor with just consecration is nice but not necessary).

But anyway I think that chaos S&B Sentinel could be a nice SSF beginner toon. I leveled mine from the beginning as chaos and shield and it was very pleasant experience as you don’t need that much rr for chaos if you get solael devo early.