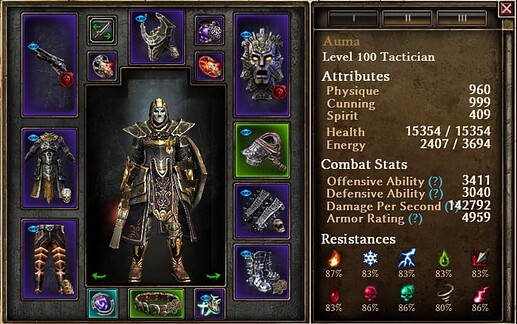 There are faster ranged tacticians, but this one is especially built to push deep SR and lazily tank all other content.

I definitely will try this, a lot of the gunner builds haven’t kept up with the patches . Reasonable greens and tanky, I like.

Pistol and Shield are always gonna suffer lower damage with cadence as you cycle the cadence shot slower, but I do appreciate a facetank all the things approach!

I like Erulan shield and it’s bonus bonus to pistols. Sadly one can’t use Smite attack in Tacticians

Two pieces of Octavius is also a nice touch. Another option would be to use Warborn helm. Better usage of flat, since -RR sources are limited. Or Ravager helm ofc. But considering the concept, your combo seems optimal.

I did consider Warborn helm, but I’d have to pull points from somewhere for War Cry, and I don’t know what I would want to take out

Would be partly redundant too with Light of Empyrion (I know you mentioned -RR, but the DR part at least). Ravager helm is an option too, but then you’d lose some ele conversion and the 2-set Octavius bonus, so in the end you’d have less %damage.

Torzini pumping out those 9.3 builds

I did a paladin version for this with righteous fervor/sandspitter. Still ridiculous defensively (albeit not as much as this build) coupled with passthrough on everything.

You might also want to note in the guide that Grimtools as of now does not show phys res from Erulan shield properly for some reason, as it always shows 10% phys res less.

Yep, I have a paladin build using sandspitters, too. I think it’s the earliest build I made, in fact. Can confirm the tankiness.

I did already note under Features (under “Pros/Cons”) that the stats are displayed improperly in GT. It’s that way for both the Erulan shield and the Colossal Grasp gloves, and also for items like the Mythical Gladiator’s Distinction belt as well. No idea why GT has trouble with passive stats of that type, but there it is.

I somehow managed to miss it when i was reading it. i was referring to sandspitter/Erulan on Paladin though when referring to the dual sandspitter/RF build. DW sandspitters are also hilariously tanky for the damage they do.

Indeed, sandspitter/Erulan would also be a great combo. I don’t think sandspitters themselves provide tankiness but they go with ranged RF, which naturally fits paladin, which is a naturally tanky class so yeah. Basically right.

is there a leveling guide for this?

Not from me, it is an endgame build, but this should still serve well for leveling a gun Tactician

Nery’s Beginner’s/budget project-DW pierce ranged Tactician
Then, you can transition to my setup when you find the items at endgame.

Thank-You. I just read your reply. I am actually leveling as a pure soldier as a forcewave. It’s going pretty smooth. Do you recommend that I swap to the beginner Tactician class at a certain level? Then to your build after I get some of the items? Also, is there any items that aren’t really build breaking from your build so I can focus on the pieces that are really required ?

You can actually stay leveling with Forcewave till level 90 or so if that’s your jam, that’s a very strong leveling path. Either way works, and Forcewave is very good for speedleveling a soldier in general.

As for items in my build, I wouldn’t say any are required to make the build work necessarily. Gameplay will certainly be both faster/tankier with the full setup, so the more challenging content may have to wait, but there are no mechanics the build uses that are gated behind gear, if that makes sense.

You are free to make do with budget gear until you can get all the random drops and blueprints, such as in this Budget Physical Cadence S&B Warlord guide written by The_Coyote. It is for a warlord, but it gives a good idea of easy-to-get gear for Cadence which would also be suited for this build.

Hope some of that helps!

Nice use of the coolest shield in the game

Really cool build, I just have a question with the RR.
Does it hit caps? (It’s fine if it doesn’t, just curious)
Since Scales grants flat RR; if you were to re-jig the devotions to use War-cry for the flat RR, how do you think you would go about it?

War cry without Warborn’s helm or big cooldown reduction (which is very rare with most physical dam builds) isn’t worth imo. Even with dam reduction, if you can only debuff bosses for 5s/7.5s CD, its not good at all. Plus you need to invest a lot more skill points to make War cry usable, and Soldier builds in general is a very hungry-pointed mastery

Yeah you’re definitely right, but still it is a curious thing to look into

Everything @gutten_morgen said is right

Mainly, it is indeed a point-hungry build, and I’d be somewhat reluctant to pull too many points from things for War Cry. You can do it of course, if that’s your preference, but then the devotion map would need a rather big retooling as you’d likely want to drop Empyrion then-- but the other big physical devotions (Oleron, Azrakaa) require more affinities.

For RR, the build has -15 (Conduit), -32 (Assassin), -18 (the two rings), and 20 flat from scales. In total, that isn’t a lot; physical tactician will thus feel slower than some other builds. The armor shred from Maul helps a lot, and it’s also good that in general, physical damage is in a good place right now.

My Warlord with Assassin, Matriarch ring, Deathstalker, and Warcry laughs in self pity. lol