that Warlord had made alternative shield soldier classes obsolete

While in the case of Battlemage - because of the Spellsource set - I would slightly disagree, there is in fact a great synergy between the Soldier and Oathkeeper mastery for shield builds. The beginners section in the Build Compendium X (Forgotten Gods) and Beginner build guides Compendium (for AoM + FG expansions) have currently two beginner Warlords, a two-hand melee weapon Forcewave spammer ([1.1.8.0] Budget physical Forcewave Warlord) and a Blitz orientated S&B build (Blitz Krieg - A SSF, HC-Viable, New-Player-Friendly Warlord). So there might be enough room left to provide another levelling alternative. The idea to use Deadly Momentum to increase the punch of Blitz is e.g. already used here [1.1.9.0] Blitzer Physical Warlord: The Tank Who Hits Hard and Fast

The intention of the build is to have the Cadence S&B Warborn Warlord gameplay on a budget build. Therefore, Cadence is used as main damage source, and War Cry is used for the resist reduction. Another target was to have a rather strong defense, centered around Overguard - especially at the end. A deliberate descision was to not use Forcewave at all - even while levelling. In the early levelling phase, Blitz is used as rather dominant damage source, so there is some kind of natural overlap with Cenos build.

While Blitz is important, the improved Milton’s Casque, paired with Safeguard and later Deadly Momentum give the normal attacks - even with a rather limited investment in Cadence - a rather good punch. So the typical gameplay while levelling will be Blitz (or Charge) into a group of enemies, use the main attack (Cadence) and Blitz again when the cooldown ends. And if the gear is updated regularly, it plays rather smooth that way. Overguard is not really needed for a long time, but provides a good boni just in case - even if the increased health regen might be more important early than the other boni.

At higher levels, the focus on Cadence will be more dominant and after level 90, the Overguard aspect is strengthened by increased investment of skill points. In 1.1.9.0 this was also done by using Colossal Bulwark, however, the added physical damage converted to aether damage with patch 1.1.9.1 reduced the value of the shield for the build. Therefore, the shield was changed to Kalis’Ka’s Harvest. To have some kind of stress test - beside the challange dungeons and nemesis on Ultimate - some superbosses kills were attempted at lower difficulties - and these attempts were not total failures with the 1.1.9.0 version.

Only self-found equipment and self-found crafting materials were used while levelling. Also, no mandates were transferred, writs were bought as soon as possible. However, all necessary blueprints were already found with earlier characters. The character was played solely in 1.1.9.0.

Grimtools of the current character. Most attribute points are invested in Cunning to increase the offensive ability (OA) and damage. The bare minimum is invested in Spirit to meet the gear requirements. 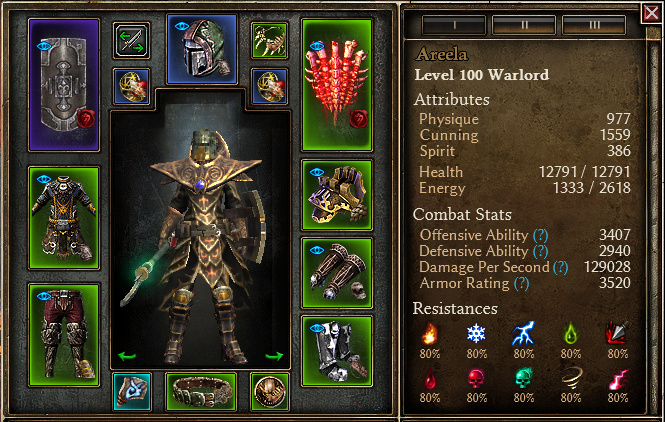 [Cadence, all permanent buffs and Deadly Momemtum and Overguard. Damage is higher without Overguard.]

Using the same components and nacked gear, it is already possible to cap all resistances skeleton character (= without affixes), however, the OA and defensive ability (DA) is rather low, so the gear must mainly support this aspects. Keep in mind that increasing Cunning will help to increase the OA and the damage here.

Go Farming: The character is able to farm totems, challenge dungeons and nemesis and (low) shards in the Shattered Realm in Ultimate relatively safe. With a bit patience also stronger enemies are possible like Ravager in Elite.

The direct endgame version of the concept is a Warborn S&B Cadence Warlord. Unfortunately, as S&B builds - beside retal - are currently not considered that favourable for endgame content (as other concepts can do the same but faster or stronger), only some have been published, e.g. [1.1.3.1] Classical S&B Cadence Warlord tank for easy SR 75 (for a Ravager farmer build see e.g.: Which Ravager should I face). There are also other non Warborn based builds, e.g. [1.1.9.0] Dual Shield Warlord! SR75~76 easy, Callagadra, Scion of the Sands Kill 2m50s, Ravager of Minds Kill 1m40s, Avatar of Mogdrogen Kill 3m16s [vid] Callagadra very easy version or [1.1.6.2] The new Carrot tank - Markovian S&B Warlord! SR 75+/Crucible buffless

And as Warlord is a relative versatile class, respecing to one of the other concepts like retaliation Warlord, EoR Warlord, Shield Caster etc is always possible. See Build Compendium X (Forgotten Gods) for the most current builds.

Minor nitpick, however: I feel any melee Cadence build without additional targets modifiers from items is doing itself a disservice by not maxing Fighting Form. You can take two points out of Squad Tactics without sacrificing any much-needed Attack Speed, and four points out of Safeguard for a minor single-target dps loss but the gain of ~33% improved AoE killing by diverting these six points into FF. I’d really recommend this.

Have thought about it, but would likely take 2-4 points for the 6 needed from Decorated Soldier. I also thought about using the MI increasing the max number of targets, as I even found a relative good one this time (level 94 superior of fury). But to not require a challenge dungeon MI, to keep the build relative cheap, I decided against the MI.

But in the end, Guardians of Empyron paired with Blind Fury and Blitz provided in most cases enough AoE damage for the content - so I at least have not felt that the third Cadence target is imperative. However, I will add a comment in the levelling section. 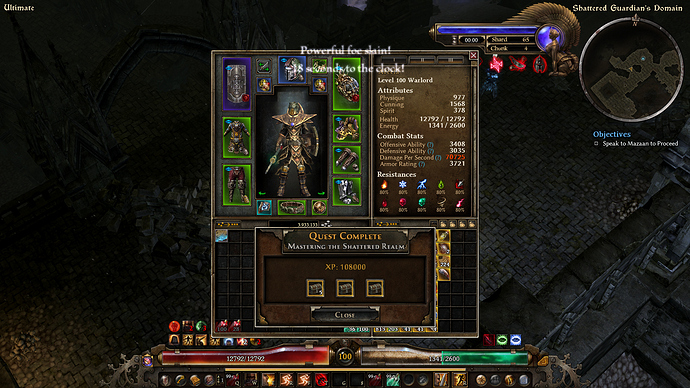 Damage is ok, but I do miss having vire’s might or another “no target” movement skill to quickly change position. Getting fightning form to 12/12 will help too clearing multiple heroes or heroes + nemesis in SR chunks

Thx for proving the SR capability

I was a bit too lazy (as I would have played all levels from 25 up to 65 which takes a bit of time - but was hopeful that SR 40/50 should be reachable [a rather conservative estimate - as you have proven now]). And yeah, group of heroes or other high life enemies are surely the situation were the build would profit the most from a three target Cadence.

Regarding the movement rune, for other content (crucible, SR), I would likely have used a different one - but for the main map - charge like movement skills are a bit more fun for me - especially the possible long distance runs (only followed by jump runes - jumping around corners / above certain walls). But I also prefer relative easy to play builds with not too many buttons to press, therefore no Vire Might as third alternative.

Edit: And added your achievement to the performance section.
Edit 2: Clones and Lokarr are relatively easy and possible without pharma.

shield now now got conversion so one has to change it unfortunately.

I can try to think about suitable replace shields later today, perhaps best “bet” is a Warden Krieg “fortress shield” …

Edit: another option might be Kalis’Ka’s Harvest - as the PoV physical damage bonus would increase also the Cadence damage part

Edit 2: e.g. something like this: https://www.grimtools.com/calc/RVvDjBGN (using a shield with the same affixes - but Overguard with long cooldown [or another affix with cooldown reduction for the shield is target farmed - or 4.5 sec are an acceptable cooldown])

Updated the level 100 version of the build because of the change to the old shield. The build now uses Kalis’Ka’s Harvest. The damage under Overguard is slightly increased, the downtime of Overguard obviously increased. Also increased Fighting Form to 12/12

Build was tested at Korvaak, Morgoneth, Lokarr - as well in Shard 25 in the Shattered Realm (all in Ultimate). New level 100 version also uploaded under character snapshots.

I ran with the build until level 94, then switched to the spare Myrmidon set I had in my inventory (by which time I was about halfway through FG on Ultimate, having completed AoM). I’ve kept a lot of the skills and all of the devos though, it’s pretty good. I’d also say it’s an okay levelling experience for a cadence / blitz S&B character, not as painful as I feared. Also, ofc, super-tanky. So thanks and well done, I think this is a great starter build to get going / farming.

There was one death only, a freaky shotgun sort of attack by Zaria outside Darkvale Gate (I was about level 45ish on elite). Maybe it was a retaliation thing, idk, but I was one-shotted by her.

Thx for the feedback, the Zaria death might have been caused by her chrystals - low chaos res and a double chrystal strike can lead to an instant death (had one as well because of this).

For the levelling phase, I think Kalis’Ka’s Harvest is now a rather good alternative to Warden’s Fortress - as the Cadence part of the build is also buffed by the Presence of Virtue %physical damage bonus.

I experimented with a load of different shields as I went, the great thing about this build is it’s forgiving when it comes to equipment. Never tried Kalis’Ka, kept the Warden’s shield as I really, really like Blitzing about.

first off all thanks for the build. It was fun and really easy to level up. (Maybe not as 2h forcewave, but what is…)
Only one death - in ultimate while stil leveling I didn’t notice that totem spawned second arcane hero

.
And other almost came when on SR50

Still have few things to upgrade, but I was wondering if my gloves are better than Mythical Turin’s Grips and what would be upgrade for relic.
https://www.grimtools.com/calc/xZyzbLAN

With the Cadence mod, the gloves surely are suitable for the build (for budget builds - there will be rarely recommandation regarding legendary items, as the focus lies on (relative) easy to obtain equipment - to have some kind of guranteed baseline).

Juggernaut as relic is rather good - but if you no longer feel that you need the proc and the OA bonus, you can use one of the higher level “+1 to all skills in soldier” relics - depending on your preferences with either a more offensive or defensive focus. In your case however, you might need to adjust your build a bit than, as Juggernaut has an %OA bonus and with your current gear and another relic, your OA will be a bit on the lower end.

I managed to push it to 200k in test patch, but my gear is less budget than yours I guess.

I would guess, one reason is also that my build is not really optimized and there is still some space for improvement. It was only a quick try, getting all the MIs with boni to Blade Arc in one build and checking how it looks in game - and as it was okish I stopped fine tuning it.

This is my current version:
https://www.grimtools.com/calc/qNYbzw42

Levelling-wise it’s very fun, perhaps a bit behind Forcewave and Primal Strike in efficiency, but shouldn’t be losing to much else.

Looks great and seems fun to play (and luckily I have not invested the time to level my idea). And finally a budget build using the hundreds of Baldirs typcially collected while levelling

I also thought about using the set as it not that rare and it is rather likely to have a complete one al level 100, but decided than to use faction stuff - just to be more similar to the Cadence guy.