The Warlord (soldier, oathkeeper) is quite a versatile class, with several quite different endgame options, e.g. retaliation, spinner or shield (see Build Compendium X (Forgotten Gods)). There is currently already one levelling guide / budget build for this specific class in the compedium (Blitz Krieg - A SSF, HC-Viable, New-Player-Friendly Warlord).

This is also only my second Warlord levelled to level 100, and the first one using one of the two often stated soldier levelling skills (Forcewave, Blade Arc). The character starts as soldier, quickly takes Forcewave and uses Forcewave as main damage skill through the entire game. Oathkeeper is taken only much later as support class, used for resist reduction (RR) and bonuses. And as quick summary: Using Forcewave was a much more enjoyable experience. A rather unusual decision here is not to use the devotion Kraken, one of the usual mandatory devotions for two hand weapon builds. The main reasons behind this decision was to be able to take Azrakaa, Oleron and Dire Bear - and using the new 1.1.8.0 Maul from the latter. It the end, the plan did not survived and Blind Fury (Oleron) instead of of Maul is used. This would allow to drop Dire Bear and take Kraken, but as the levelling was already done without Kraken, this version is posted.

Only self-found equipment and self-found crafting materials were used while levelling. Also, no mandates were transferred, writs were bought as soon as possible. However, all necessary blueprints were already found with earlier characters. Blueprints for high level relics might be problematic, so use the best one you currently have at hand (here: it should have +1 to all skills in soldier). The character was played solely in 1.1.8.0. 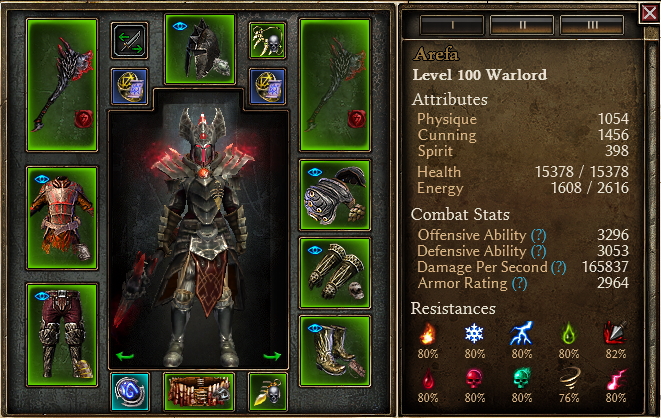 The attribute bonuses provided by the gear and skills allow to make almost a full cunning dump (investing all attribute points into cunning), only one point is needed to reach the necessary Spirit level. To equip the amulett an “equip item” (other gear slot - e.g. medal, with high Spirit bonus - only used to equip the gear) is worn. A possible alternative devotion setup with Kraken instead of Dire Bear could look like: Kraken version of the build (Grimtools). This version has around 5% more damage per second (dps), the sheet damage increases to 172k.

The necessary resistance can be reached without specific pre- or suffixes. Here is a skeleton guy using only pre- and suffix free monster infrequents - with already overcapped resistances (Skeleton Grimtools). Note: Some skill points are distributed differently in the final build above because of skill bonuses provided by gear.

Go Farming: The character is able to farm totems, challenge dungeons, nemesis and low shards in the Shattered Realm in ultimate. The current list of endgame builds can be found in the Build Compendium X (Forgotten Gods).

Lack of Kraken is a bit surprising though. Sure it doesn’t benefit Forcewave like it does autoattack builds, but still it’s a lot of %damage and other good stats.

EDIT: just read your justification for that
Personally I’d had just back-edited my snapshots. Underhanded, but the less questions asked the better

EDIT2: since you seem to be into beginner guides too now - I’m currently levelling a PB reaper. Just so that we didn’t accidentally did the same thing

What are the best spots to farm The Cleaver?

Googling came up with the following: BoS, Plains of Strife, Tomb of The Watchers…what do you recommend?

What are the best spots to farm The Cleaver?

Chaos Monster totems can lead to some drops [i got my first one from a totem fight in the Blood Groves] - the earliest spot should be the new chaos dungeon north of the Broken Hills rift where sometimes one is dropped. Later - moving from the lone watch rift to the Malmouth should result in some drops. But the absolute best spot is the Bastion of Chaos, where you can even buy them from the vendor in the second level (Anarchy). [just in case: the vendor sortiment is renewed if you go to another level of the dungeon - stay there some time [e.g. 30 sec] - and than go back to the vendor]

Earliest place should be monster totem in the Depraved sanctuary. But best way is as mentioned to vendor farm abuse it in BoC. You can do this in any difficulty because vendor inventory depens only on your level. When I do SSF FW builds, I just go there in normal (and later in ultimate when I have good enough gear to complete that dungeon on that difficulty)

I have these two:

Shall I farm better ones in Veteran or just wait and do the farming in Epic?

Edit: and for now, it is good enough, you can always come back later - but the amulet should carry you until you reach the area in Elite again

Edit2: and having a medal with +2 to Forcewave is almost as good as possible at this moment

I just farmed the pants: 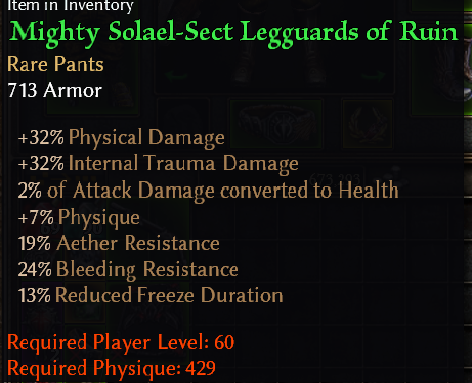 On my 2nd try, the 1st pair has all mods useless, but adcth was 3%, but this pair I like better

Later maybe I will farm pants a few times more for the 3%.

Just got it , cheers!

my First Cleaver, dropped without me even thinking of it, just before Vanilla final boss: 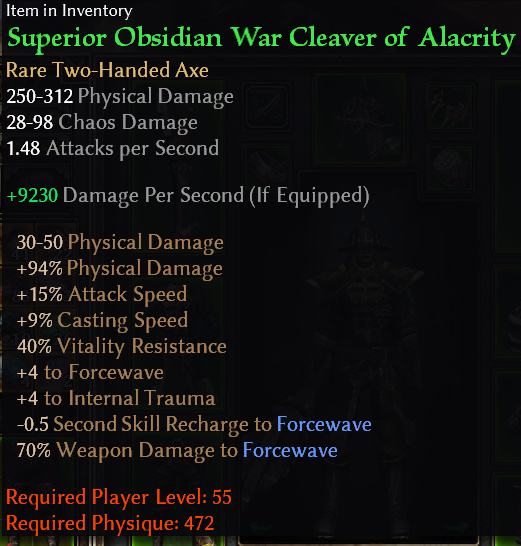 I will farm a little for a better one I guess!

It should be good enough, your one is quite similar the first one I found - surely not perfect (as we need casting speed and not attack speed), but should have already “slightly” increased your damage.

re magical suffixes: of Celerity increases casting speed, of Ruin would increase physical damage - you will see later some drops (so Superior Obsidian War Cleaver of Ruin / of Celerity would be the more easily to get version for this build - and than there are single rare versions - but at this stage I would not that strongly farm for a perfect Cleaver - as you need to get higher level version later)

ok, thank you for the insight!

Now I am progressing with story line but later I will farm for 1 hour, listening to news as a part of my passive language learning thus keeping my conscience calm

Did you have a chance to test Physical FW with Demolitionist?

I can see in the tree some options, like: Temper (for FW synergies and DA), and Flashbang for CC and de-buff.

EDIT: and how does Presence of Virtue from Oathkeeper work?

EDIT2: I can see in your build that Guardian of Emperion with Blind fury from devotions plus their debuff are gonna be super strong, are they?

I know of this merchant you mention, but what do you mean when you say abuse him? is there a trick I shall know

If you leave the level with the vendor and move to another level of the Bastion of Chaos and stay there for a time (e.g. 30 sec), the moment you come back to the vendor, the inventory is new - so you can look for good rolls and rare affixes.

More or less the same applies to faction vendors, move from one vendor to the next and check the inventory to get good rolls on the faction stuff.

Physical Forcewave should work more or less with all other classes, some have better, other have slightly worse synergie - but the main principle is the strong soldier base.

Presence of Virtue has some nice features: energy, offensive ability, and reflected damage reduction (and a bit of flat damage)

I have used Guardians for the proc from blind fury as the proc is than centered around them - and they are more often near enemies than my character - and so they get some additional worth / damage dealing.

EDIT: so guardians would be a distraction / meat shields too? it would mean taking the heat off me

I find myself kind of mid range most of the time.

Guardians have very bad aggro. Boss will come for you in 99% of time