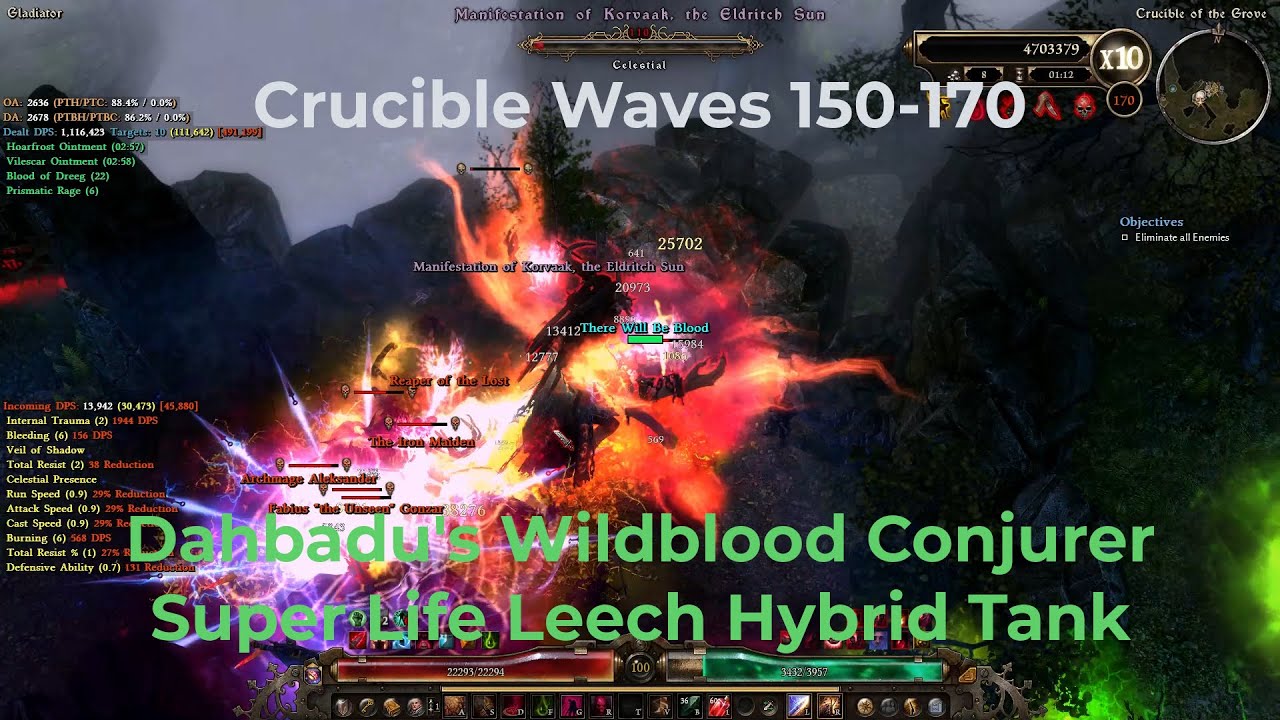 Level 100: Conjurer, Level 100 (GD 1.1.9.1) - Grim Dawn Build Calculator (w/o Monster Infrequent)
This is the version of the build showcased in the video. I’m purposely trying to avoid MIs due to their rarity and being unrealistic gearing choices.

Level 100: Conjurer, Level 100 (GD 1.1.9.1) - Grim Dawn Build Calculator (w/ MI)
This is the ideal version of the build. This version of the build is stronger, but it uses a couple of MIs with specific double affix combos that are pretty unrealistic to obtain without GD Stash.

Skill Investment Priorities:
Use the Grim Tools links above for guidance.

Gear: Most of the gear can drop anywhere and you’ll naturally acquire it through play
Valguur’s and some Mythical Gear: Requires Ashes of Malmouth (AoM)
Amulet: Spawn locations - Gannar'vakkar, King of the Sands - Grim Dawn Monster Database

You mostly let enemies come to you, and while they’re running at you, you carpet bomb them with Curse of Frailty, Grasping Vines, throw out a couple Devouring Swarms to tag an area while dropping a Wendigo Totem. Keep in mind that it’s usually not worth re-casting CoF/DS on the same enemy if it’s still ticking, unless you want to force a proc – your action economy is best used for something else.

Basically you can Facetank several nemesis bosses while blowing up the screen in glorious procs. You can smash stuff with your hammer just to feel cool and to get the defensive buff from Savagery.

This build does suffer from piano key syndrome, but I find it really fun to play and pretty to behold. Also, I kinda like piano key builds, so I’m slightly bias.

You do not have a built-in way to cure yourself of debuffs. Luckily you’re very tanky, so you can tank through most debuffs, but sometimes you’ll run into trouble as showcased in the video. If that’s the case, you’re looking at jumping away with a disengage skill. It’s not too bad, because usually the monsters have a bunch of DoT life leech effects on them, so you heal up quite quickly.

If you have any feedback, questions or want clarification on something, feel free to reply. I’ll try to keep this OP updated and answer any questions.

If people seem to appreciate and there’s interest in this content, I’ll be posting more.

why are you taking both scales and revenant devotion? their resist reduction doesn’t stack

I’d probably change some things up to get better cc res. Maybe stoneplate greaves or a seal of resonance. No dying god? Pretty sure osyr’s temper gives you better oa/da on jewelry - you have chaos to vit conversion for the flat. With a little more you could play around with abomination too.

Scales is just a great sustain constellation with good stats. The resistance reduction is just icing on the cake, and although the sources may not stack, there’s usually lots of monsters on screen, and it doesn’t hurt to have another source.

Both constellations add value to the build and are better than other choices to support the colors, basically.

better than other choices

idono, i’m probably with Fishy on this, i think Dying god would be good vs having both t2 flat RR devos

Feel free to play around with different constellations, but I found this constellation setup to be the strongest overall, and there were several versions of this character that used Dying God and Abomination. Most of the Dying God/Abomination versions were too rippy and not reliable (if you’re avoiding potions) to get through Crucible or tank Ravager, etc. So what you see is just the result of what performed the best.

Also feel free to try switching stuff up with gear too. My gear choices are also taking procs/mods into account, as those are usually more impactful than just straight OA/DA (as long as you meet certain thresholds), and that’s one of the reasons why I’m choosing those boots over another pair, etc.

I’ve tinkered with this build for a while, and I found this to be the most reliable version of the build that doesn’t use Monster Infrequements. I have a stronger version that uses a couple of MIs, but I didn’t want to share that because MIs with specific double affix combos are usually unrealistic.

I updated the post with a MI version of the build. So if you wanna min-max with GD Stash, that’s probably what you’re looking at.

idono, i’m probably with Fishy on this, i think Dying god would be good vs having both t2 flat RR devos

I’m of the same opinion as well.

Have you tried just moving those same points to Kraken instead ?

The first several versions of this build used Dying God, Abomination and Kraken. And this build has taken different forms throughout the patches and expansions.

I found the current iteration to be the most powerful, but feel free to test whatever you want. That’s what makes GD fun.

For me, the RR from Scales is just an afterthought and that’s not the reason why I’m using Scales.

I can’t seem to duplicate your devotion selection. It is not possible. Are you doing something tricky?

Nothing tricky, perhaps you’re not familiar with removing lower level devotions after you get access to the higher ones? Generally speaking it’s good to start by opening up all 5 of the crossroads and then work your way out.
1: 5 in crossroads
2: Lion
3: Bat
4: Eel
5: Lotus
6: Jackal
7: Falcon
8: Panther
9: Scales
10: Panther
11: Wendigo
12: Revenant
13: Huntress
14: Rattosh
Good luck n have fun!

Yeah, my first several versions of the build used Dying God and Kraken, and including Abomination too. Like, the character uses a big 2-hander, so Kraken etc were obvious choices thematically.

But I found that version of the build was very hit-and-miss doing the real challenging stuff (e.g. Crucible 160-170, etc.). Yes, it did do more damage, but I found it less reliable and more dangerous to play. Like you’d be slaughtering everything and feel fine, and then suddenly you’d get instagibbed and your Crucible run would be ruined.

But feel free to try both.

This build is probably one of the better SSF (solo self-found) builds I’ve played. Several people have asked for more early game and leveling advice, and understandably so.

I updated the OP with Grim Tools links for the early-mid (level 35-40) and mid-late game (level 50-75). I also included significantly more advice on leveling and onboarding a character. The generic leveling advice may also be applied to most builds.

If anyone has any questions, feel free to ask.

Thanks for the notes on how you approach the leveling.

cool, yeah I have the wildblood set in this build of mine which looks a bit like yours.
grimtools