Last time, we had a deep overview of everything now in-game with the release of v1.1.6.0 last month.

Today, we’re ready to talk about more of what’s still in store for Grim Dawn! Attention is now turning to V1.1.7.0 (and perhaps beyond? Hmm?).

We’ve dropped several hints over the past few months, of areas previously unexplored and domains left to conquer, but why stop there?

One aspect of the game we find ourselves going back to repeatedly is also one of the most fun, and yet also often frustrating. Monster Infrequents, as they’ve come to be called, are exciting to discover, but getting the affixes you need can put a drain on that joy. It’s not uncommon to see the phrase “just GDStash it” in the community.

There is a fine line between making a loot drop so common that it becomes boring and so rare that you’d rather just cheat it in, but we think that perhaps the game is a little too close to the “cheat” end of the spectrum right now.

To that end, we are making a number of changes to Monster Infrequents in v1.1.7.0 that should make getting them, especially while leveling, more exciting:

Reducing the Infrequency
First off, we are completely removing the chance to get a Monster Infrequent with just a Rare affix. Instead. In v1.1.7.0, all Monster Infrequents will drop with two affixes. In addition, we are increasing the chance of them rolling with at least one Rare affix, and significantly increasing the chance of dropping with two, making it a coveted TRIPLE rare. After all, you’re not just trying to get an ultra-rare drop. You’re also trying to get it with ideal affixes, and that’s perhaps a bit too much prayer to RNGesus.

Next in line, we are going to be doing another pass on Monster Infrequent balancing. We’ve done this in the past, but there are still Monster Infrequents that could use a bump for endgame purposes. The biggest changes probably come in the Necklace and Medal slots.

(As always, stats on items previewed in our dev updates are subject to change as we approach a patch release) 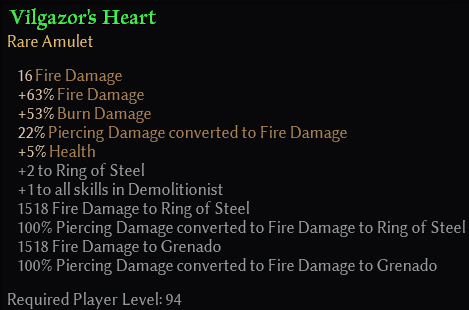 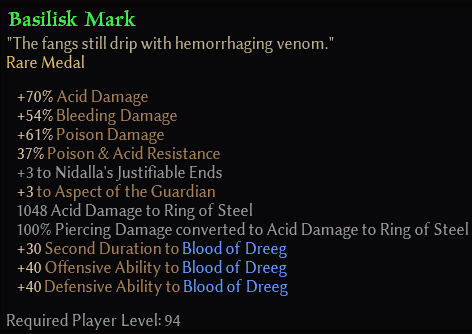 MOAR
Next up, yes turns out this list just keeps on going, we are going back to many of our vanilla boss encounters. V1.1.6.0 started us on this path with Monster Infrequents for Ilgorr the Eternal and Lagoth’Ak Harbinger of Blood, but many bosses are still woefully lacking in unique drops. This was a standard we established with Ashes of Malmouth and carried forward with Forgotten Gods, but it is time that the base game is brought in line. 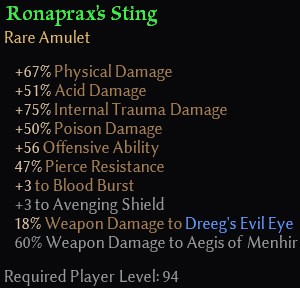 This is going to be huge for your loot hunt as we are adding 30, yes thirty, new Monster Infrequents to the game and finally giving you some incentive to hunt down those bosses you’ve probably forgotten about while running through the Korvan desert! 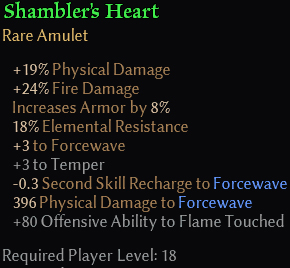 Modifying Vanilla
The last change we have in store took a lot of deliberation internally. Item Skill modifiers have become a staple of Grim Dawn with the release of Ashes of Malmouth. They are such a core mechanic now that it feels wrong not to introduce players to them sooner. As such, with v1.1.7.0, we are going to be shifting Monster Infrequent skill modifiers as a feature to the base game, rather than exclusively a part of expansions.

Many players are still discovering Grim Dawn for the first time, and we want to make sure that they experience all the aspects of what makes character building in Cairn so enticing and rewarding.

With all this on the horizon, we think it’s safe to say that v1.1.7.0 will be the Monster Infrequent patch!

Like knowing what is coming up next for Grim Dawn? Check back on 05/04/2020 for the next Grim Misadventure.

76 Likes
Grim Misadventure #170 - A Crucible of Sights
How rare are certain prefixes/sufixes on green items?
Japanese Translation (Closed)
[Idea] Can Pierce/Physical/Bleeding caster off-hands have Cunning requirment instead of Spirit one?
Some thoughts and suggestions
You Tube builds with MI's I call GD stash cheats
Roadblocks that randomly appear each session. Do we need them?
Grim Dawn Version 1.1.7.0
Item Farming at max level
arivus March 23, 2020, 6:28pm #2

Oh, if you gonna add more MI for it, please making Direni head as off hand

…but what about the bridges?

Earlier today I said I don’t think that Z can surprise me.
Z has surprised me… again…
Out of these 30 new MIs I really, really hope there is something for my favourite Obsidian Golem, Bane’Gargoth in Obsidian Throne!

Kudos for adding MI item skill modifiers to the base game.

Great it keeps getting better all the time.

As it turns out, the bridge was inside us all along

As such, with v1.1.7.0, we are going to be shifting Monster Infrequent skill modifiers as a feature to the base game, rather than exclusively a part of expansions.

This will shake up my little experiment - looking forward to it.

(from someone thoroughly farming for Bargoll’s lace, and was close to despair to find a good one). That’s really an awesome change (although I think a system to dismantle/craft affixes would be dope for GD 2).

Once again Crate Entertainment is showing why they are the best!

About that Basilisk Mark and all that talk about double rares… Why does a medal for Blood of Dreeg HAVE TO give acid res? It also so happens that most acid rare affixes give acid res as well. So, say, Blighted BM of the Cabal, and we’re already at ~40% acid res overcap.

So it’s cool that new support is being added but old problems also deserve to be looked at.

Looks like we may have to start calling them Monster Frequents rather than Infrequents.

Glad to see amulets following the pattern of belts. Will this change in affix rates affect crafted items? I know many players turn to crafted boots, and a lesser extent gloves and pants for fine tailored stat density. Current rate of crafted double rare is sub 2% so I’m devilishly curious what impact this might have.

Each update just tops the previous one. Bravo! Such an awesome update. More proof that GD is the game to play!!