As I’ve mentioned before, I really like trying to make the Shepherd Lost Souls set work in toons other than cabalist (though it is fine there too).

Remember the old Diviner set spellbinder builds that spammed reap spirit every second or two? The pet was kinda useful and the spell itself did a nice chunk of damage… well, this build is kinda like that, a “reap hellhound” build. I can spam hounds every 1.6 seconds. These are 26/12 12/12 22/12 16/12 hounds… they’re angry. When they blow up, they’re angrier yet. The toon can use the two dogs as traditional pets, and can be played as a normal pet build really, but spamming them is like dropping a chaos / fire bomb and very spammable.

This uses two easy to farm greens, in videos below nothing is a DR, easy and realistic prefix / affix. The offhand is essential to this build. For the medal, you can probably use The Overseer, though Halion is an easy farmer. 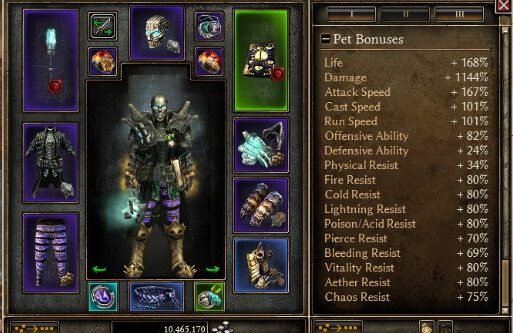 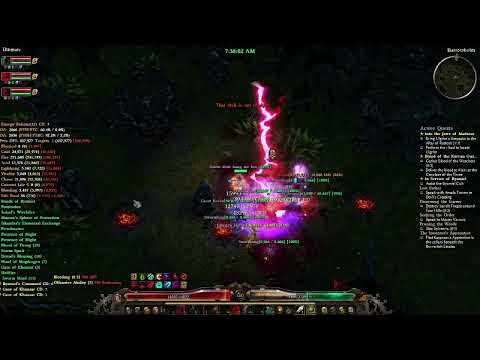 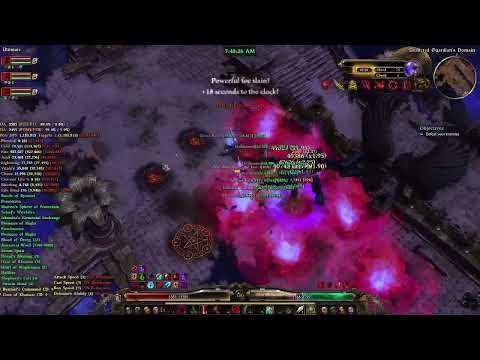 I thought this toon was different and kind of interesting, worth sharing. It is a lot of fun to play in game. Possession combined with Maiven’s give a full 33% dmg absorb, that combined with heals, and dmg reduction from the dogs well… it isn’t a tank, but survivabiltity isn’t bad. It can cruise in SR80, but above that you’ll definitely find yourself back in the Conclave at times… but, higher is doable if you don’t mind dying. I thought I’d show how easy regular content is, the dogs are buzzsaws.

Added fight vs Lolokarr. ~15 seconds, no drama. Do have to admit, got Mogdrogen down to 50% but that lightning freak got the better of me shortly after, only tried once. He’s my least favorite pet build celestial to fight… Will try again I suppose.

Also, realized I was only using 54/55 Devo points in the build above, I stuck that lone point in the first node of the lion for a little DA and health for the raven / bugs. Panther might be good too, but I already have OA pretty well covered I suppose. 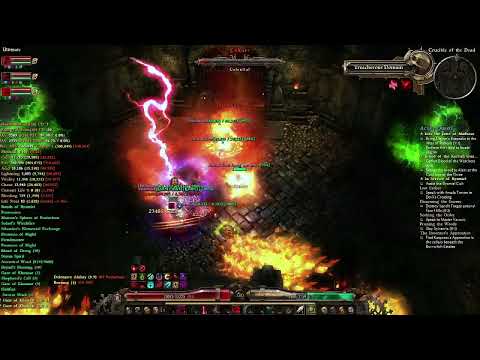 Also, realized I was only using 54/55 Devo points in the build above, I stuck that lone point in the first node of the lion for a little DA and health for the raven / bugs. Panther might be good too, but I already have OA pretty well covered I suppose.

I’d stick the last point in the Chaos Crossroads - it gets you to 15K Health, which is always a good benchmark to have.

Other than that, I love the creativity you put in here, and the Ravager kill time is great for such a unique concept. Way to rep the pet Warlocks.

Thanks much, this is my second posted pet warlock actually… heh. I tried to make that one a pure occultist, but really needed that extra oomph from the Arcanist to get it over the hump and not be garbage. But, this one in this thread, it is actually not bad… different, but not bad. Thank you very much for the compliment…! A lot of the low hanging fruit has been picked, LOTS of great pet builds out there. Always looking for something different.

*edit - Well, looks like in addition to only using 54 devos, I also didn’t bother to add a component to the belt in the link above / build in the videos. Enchanted Earth would get me plenty of HP, and give me a little more regen. It opens some options. I suppose I should perfect these things somewhat before I post them… heh.

Great creativity in this build. Now I can put my moldy Lost Souls set to use, hated skellies but I like the doggies, will definitely try this.

Took on Mogdrogen a few times… I’d get him down to ~25-30% health without a potion, but then I’d eventually get smacked. So, wussied out, took a Stormshroud Ointment for some extra lightning resist overcap, changed up my tactics a bit to use a little more space (didn’t just stay near his shrine) and… not too bad. Five min 38 seconds to eventually take him out, some kiting, but he really didn’t have my toon in bad shape either. Not sure what is “good” for Mog, but I’m happy none the less just beating that one with this kind of build. Without enough offense his summons can become overwhelming, but blowing up my dogs really does a nice job wiping them out. Forgot to stick an Enchanted Earth or some component on my belt, but I did stick that last devo point in the first node of the Lion (using 55/55 now, little more HP + DA…) 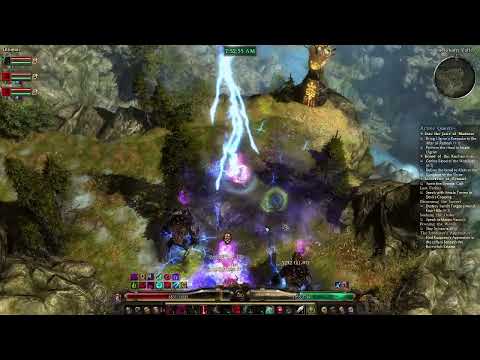 Started the build yesterday, I have tons of the greens for it and 3 Lost Souls sets. So fa r so good through Elite, Salazar’s MI to level with.

Nothing wrong at all with a Salazar blade… heck, that pet could be an upgrade when it is out, love that mini-ravager.

Almost had SR90 /timer. But, damn reaper got me a few times before I got him. But, made it to chunk 4 and killed Iron Maiden, Theo, and Benny w/timer… not bad! 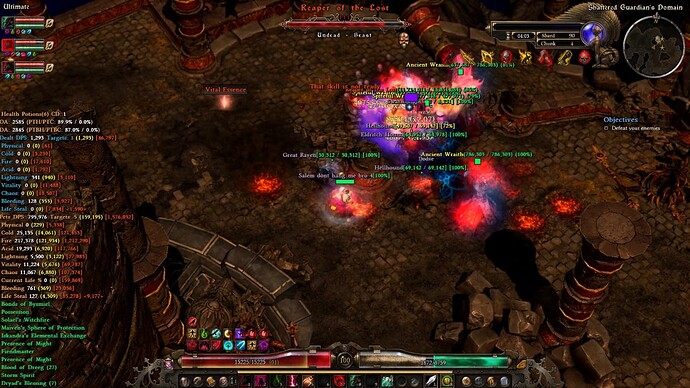 That’s really impressive , gives me a lot of confidence going forward. I’m old and slow, anything over SR 50 gives me trouble with any build. Still doing OK leveling so far. I’d really like to complete some of those new SR sets. Black Hand mace until level 94.

You’ll get there. And if it is working for you now, I think you’ll really like it when you complete the Shep of Lost Souls set, the real party trick happens when you have two dogs.

If by the time you get there you need the last piece or anything, let me know… I have years worth of a stash, have just about everything.

Thanks, I’ve got plenty of everything except the new SR sets and of course Celestial Crate boss stuff. I’m over 6,000 hours, retired and lots of gaming last 2 years.

Heh, you know what you’re doing then… good luck with the toon, let me know if you like it.

Dude you’d need to post the skill tree to where exactly to put the skill points/talent points for the two masteries that makeup the warlock class and all.

They did in the grimtools link in the opening post.

I looked but it doesn’t show 2ndly I’m on Xbox the setup is slightly different from the PC setup and all too.

What can’t you see on Xbox? The whole thing or just parts of it?

all of it but its the skill point placement I’m referring to also which is over cropped w another screenshot and all too.

Well, hopefully Dammitt the creator of grimtools wil be able to find a fix for it.