What's a fun skill to base a new character around?

After a few months away from Grim Dawn I am looking to start another play-through. What is in your opinion a fun, effective and preferably flashy looking main skill to build a new character around? I’ve checked quite a few build videos, but usually there’s so much going on I have a hard time distinguishing the skills that are being used.

Some skills that sound interesting to me are:

Out of these, I definitely liked the Ritualist best and I even finished AoM with it for the first time (I found myself starting anew after nearing the end of the main campaign on veteran as I grew bored of a character). I really like the look of Bone Harvest and Ravenous Earth is a fun skill as well.

The Elementalist was nice too, though Stun Jacks didn’t look half as cool as I had hoped. In hindsight, I found auto-attacking with Firestrike a bit boring as a Purifier even though I did use other skills such as Flashbang and Thermite Mine. Playing as a Reaper, the skill I found most fun to use was, surprise, Bone Harvest for the Soul Harvest buff.

If you could offer any insight, or maybe point me to a class you find fun to play from the early levels, that’d be awesome!

Panetti (PRM) from Arcanist:
the picture shows Vitality ones because I have this screenshot but Lightning / Fire Mage Hunter is recommended 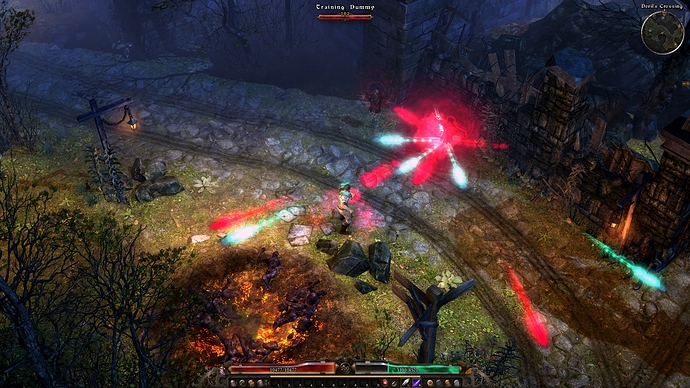 Vitality Phantasmal Blades from Nightblade
(you throw red knives, looks better later when you have more of them and Blade Spirits are red too)

yet another meaningless accomplishment of mine

[2f77ee21a395715c5e2a3dd8bbb6b86e] Reaper is actually woman and have gun? Introduction Phantasmal blades is super cool skill, it’s ninja skill - throwing knives around and vitality casters are very tanky creatures. So combining these two qualities results in very fun character. Vitality PB can be build in multiple combinations like WH, Reaper, Trickster and Dervish. Each one have pros and cons. Credit for this build is to @mad_lee Dervish and old Reaper by @sir_spanksalot Update for 1.1.6…


Callidor Tempest:
Everything exploding around you is very satisfying. Also sounds like We Will Rock You (see Meme Section).

I really like the look of Bone Harvest and Ravenous Earth is a fun skill as well.

Here is also a showcase of item skills although most of them are either for high level characters or weak. I lilke making builds around components skills.

And here are visual changes from skill modifiers but mostly to endgame characters:

Visual changes of skills through items Classes, Skills and Builds

Thank you very much for the reply and the suggestions! I did put a point or two in Blade Spirits with the Reaper, but it indeed looks better when its red. The Vitality Phantasmal Blades do look cool as well.

My Reaper was actually specced into Cold damage and I was hoping that one of its skills would have that awesome ice effect, but only now I see that it’s from Chillspikes. I might need to continue playing with that character some day.

When looking at TSS, I was also wondering whether PRM would be fun and I almost mentioned that skill in my first post as well. Perhaps I’ll just start as an Arcanist, as I’ll then be able to try CT, PRM and TSS for a wee bit before respeccing and settling on a second class.

Edit: Thanks for the last two links as well. I’ll definitely check them out after work tomorrow.

TSS has one of the best looking sets in the game:

[image] GT link and in-game stats if you are lazy enough to read the whole text [image] Skills and devotions explanation There is no trick in skill distribution: 15 points in Vulnerability - you need as much RR as possible Maxed Trozan’s Sky Shard is a main source of damage Maxed Sigil of Consumption is an additional source of damage and a source of lifeleech. Other things are pretty default like maxing Maiven’s Sphere or cap 10/10 Nullificati…

When looking at TSS, I was also wondering whether PRM would be fun and I almost mentioned that skill in my first post as well. Perhaps I’ll just start as an Arcanist, as I’ll then be able to try CT, PRM and TSS for a wee bit before respeccing and settling on a second class.

And you can also try some Olexra Flash Freeze with CT. They can compliment each other for a freeze explode style.

Other than skills you’ve tried I like Phantasmal Blades as throwing knifes looks good. Also Rune of Haggard and Canister Bomb have nice projectiles/fragments attacks.

And since TSS was mentioned, I will add Devastation, especially with Anasteria’s helm.

75-level blueprint for the helm is sold by Vinelton in Feral Thicket.

Thanks for the comments everyone! Looks like I might try a PRM Mage Hunter, roll a Spellbreaker or Sorcerer with Canister Bomb, take inspiration from one of Duchy’s OFF builds, think of something that utilizes RoH or try a Phantasmal Blades build next.

Winter King’s Might definitely looks nice as well. I just watched a short vid of someone using both that ability and Chillspikes and it’s what I envisioned my Cold character’s attacks looking like (I’d hoped ABB was one of those skills when I started playing the Reaper, so I was a tad disappointed :))

I also remembered that my very first character was a level 62 two handed Primal Strike Shaman whom I just started leveling the Arcanist class with before I stopped playing for GD for a while. So I can respec into a TSS Druid build and continue playing instead of starting over and quitting once again around the level he’s at. Nice.