[1.1.6.2] Beginner's Shadow Strike Infiltrator. Cruise through endgame in faction gear and without keyboard

matrix-neo-one-arm-optimized.gif1100×456 2.97 MB
– I am the chosen one…, – you, lying on your sofa with a wireless mouse in one hand and a bag of chips in another, while playing this build

Infiltrator is one of the few melee-friendly classes.

It’s probably not as versatile from the beginner’s stand point as Blademaster. But it’s a little stronger in it’s best version and it certainly deserves to have a strong build for beginners (same goes to one of two best dmg types for melee - cold

The majority of the builds posted on the forum are meant for experienced players with all the items in the game.

But it’s a fast-paced world we are living in, people come and go. Not everyone is ready to soak hundreds of hours into the farming (or to get into 3rd party tools and obtain the items “illegally”).

Now, i will not get into the details of early levels gameplay and reputation farming too much simply because i don’t have enough experience in that. I’m sure you’ll find other, more generic guides on the forum. What i personally know is what makes the build work in endgame so i’ll focus on that.

What do you need for this build: 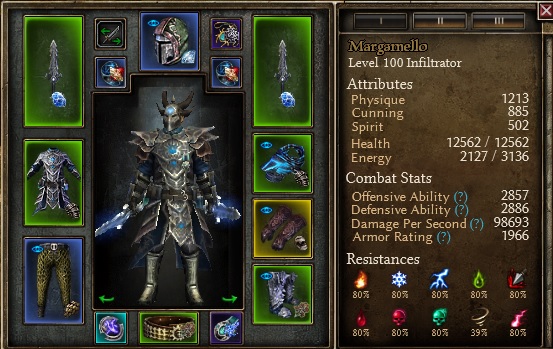 dps is in Shadow Strike

The concept is as simple as it can get: you invest into Shadow Strike (SS) line, get two Loxmere’s Frostblades with any affixes and use SS as an autoattack replacer effectively reducing the number of buttons needed for gameplay to a minimum while maintaining one of the highest mobility values in the game.

By minimum i meant literally minimum, two active buttons: [left click] for SS and [right click] for your movement rune.

Both healing abilities are long duration buffs and can be bound to other mouse buttons or even be pressed at the toolbar.

That build doesn’t rely on fantasy items. Morgoneth’s set is target-farmable as well as Loxmere’s daggers and Gargoyle’s belt. The set, the daggers and the belt with decent rolls alone will net you one of the strongest builds in the game even if you don’t have other non-faction gear. How about that!

Best augments for weapons and jewelry are sold at Cult of Bysmiel and Malmouth Resistance, same goes for items.

Revered status with these two factions is mandatory, luckily it’s a very easy farm: Cult’s rep is farmed naturally by farming, for instance, Tomb of the Eldritch Sun; Malmouth has a daily quest with a relic craft which gives net zero on valuable materials, basically reputation in exchange for money (aka corruption).

Barrowholm rep is not as easy to farm. But you can replace the shoulders with easily farmable Ascendant Shoulderguards for +3 to SS.

All the items in the build are bare minimum, you’ll have some better replacements for sure. I suggest to farm yourself Morgoneth’s set right away and use this base as a starting point for the build.

+% attack speed affixes on Loxmere’s daggers will help a lot too but don’t spend too much farming them. Daggers have a lot of affixes.

Inquisitor’s Seal is not used in the final setup but it’ll help you get through all steps of campaign and leveling (needs another button though). Combination of Veil of Shadows and Aura of Censure produces a very strong aura with 60%+ resistance reduction and 15%+ damage reduction to all the surrounding enemies.

For early levels i suggest to cap the Seal, both auras and Word of Renewal

line. Use SS as your autoattack right from the start and make sure to get the rush rune from Conclave of the Three as soon as possible.

With these two movement abilities you will be able to relocate yourself quickly to get out of any trouble.

For devotion i suggest to take Amatok

and constellations with “attack damage converted to health”

stats first. Blizzard is a very powerful proc. Bound to Blade Spirits it will munch your opponents even when you are running away from them.

If you find yourself struggling with survivability it might be due to low armor and phys res. You can bump phys res by 7% using Dual Blades. Sacrifice some points in Merciless Repertoire. You can also max out Vigor for more health.

All in all, it’s a gimp to the build to not take Ring of Steel or Lethal Assault. Both of them will improve the survivability and overall performance significantly thanks to fumble and more flat damage to leech off of. But they require two additional buttons so it’s up to you.

As advertised, here is gameplay with one hand. Crucible 151-170 was used as a stress test to ensure farming capabilities for 101-150.

As you can see in 66’s bossroom, Fabius can be a trouble if you have -15% health mutator.

All the content from the main campaign is easier than Crucible 151-170 and SR 65-66 and will be joyful experience.

I hope this helped some folks to get into melee in Grim Dawn. Feel free to ask any questions about the present build or it’s possible upgrades.

Thank you for giving beginner s another type of build that have easy gear to find.

Do you think this build would be HC viable, or do you suggest any changes maybe ?
Regards

Hello!
I’m not HC player so i can’t say for sure. But the defensive properties of this build are too low to play safely in HC. The endgame became very deadly past few patches.

For HC i think you’ll have to find other gear with more armor and phys res.

The base of the gear is two daggers, +4 to Nightblade and one item with +X to NJE. These items allow you to cap NJE and NIghtfall. Building off that, if you can find gear (mainly farmable MIs) with high armor, health and phys res and if you invest in Dual Blades, RoS and Vigor at a cost of Merciless Repertior and maybe Elemental Awakening, you should be fine in shards 65-66 and 101-150 Crucible.

Look for: attack speed on Loxmere’s daggers, total of at least 30% phys res and 2000 armor and 14k+ health. Also i think you’ll need both hands to manage healing abilities and healing potion effectively.

Is it possible to play it as a spellbreaker?

And finally, the “daily” quests are per session, not per day.

Is it possible to play it as a spellbreaker?

Yes, it will be a little weaker.

They don’t have required + skills

“daily” quests are per session, not per day

I know, i thought it’s just what they call it

Burger breaker has been around for a while. Spectral longsword is your bargain bin leveling option that you can vendor farm for crushing normal and elite. Lox doesn’t show up until elite (go ahead, make a suggestion for him to spawn on normal) and not until act 4 so realistically you’re not using loxblades until you’re just shy of stepping into ultimate. As swords they lose 100% cold right out the gate and their other bonuses don’t redeem them. Leveling options and nothing more.

(go ahead, make a suggestion for him to spawn on normal)

no thanks, I already suggested him to be in SR. Although it wouldn’t be a bad idea.

Good point on the loss of %cold on the swords. A shame. If vendorshopped pulsing shards can be endgame items, perhaps the longswords won’t be harmed by a little buff either.

Nice to see that you guys are still making beginner and budget builds, I have not touched the Game for 8 months but I might get back into it soon now that it seems to be more finalized

Glad to see you back.

I will probably start play GD again tomorrow, starting with my Primal Strike warder build guide and then I was thinking about doing SS infiltrator and after that Blademaster, either cadence or PB. I would like to have as “clean” new start as possible so why not test some of these budget builds that we have created?

I was aware of his Blademaster guide and even linked it in mine. That was more of a challenge: to take any fresh melee char and beat endgame with it. I actually recorded a run with a faction-only setup later, it completed Crucible in under 7 minutes and SR65-66 deathless. Faction gear is pretty powerful if you know what to look for.

Faction gear is pretty powerful if you know what to look for.

yes, and same with some MI’s - some of them are great even with garbage affixes.

why aren’t your beginner builds in the compendium? you should definitely post them there

Compendium of all the builds or there is one for builds for beginners?

I should. Every time i make a guide i’m so drained i postpone posting it in compendium and then never come back because there are new builds to get to 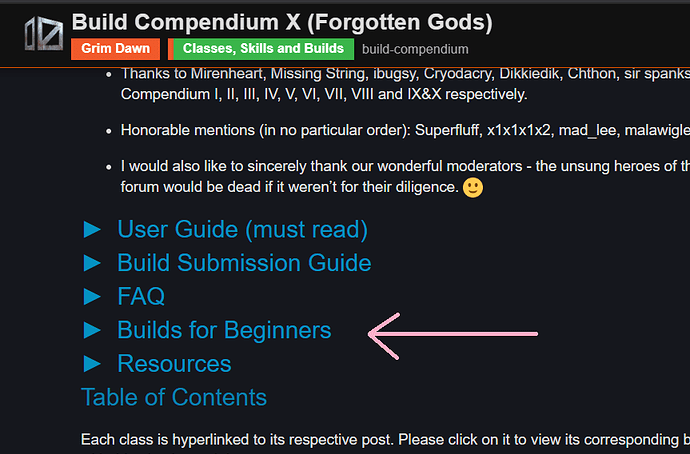 yeah I am kinda the same, once I have made build I play it a bit and then I move on to another one

I am not that keen on testing it in every aspect and fine tuning them and grinding SR and cruci. I am more of a build collector rather than perfector (is that even a word?)

I’m not sure if there was such an implication, but personally I’m not pressing anyone to include my builds just because they bear some semblance to their own. If you do then do it out of your own goodwill.

As for beginner section of the compendium - just link the thread in the compendium and ask to add it to beginner build section. Since they are scarcely posted I do the formatting myself.

Please make me (us?) a GT link with your suggestions for HC.

I’m completely noob and playing only HC as i said before and would like to maintain such toon like this when i work* (psst!!!)

*Doing “standby” job, so we must always be ready. (only playing pausable solo when i’m working

No reasonable adjustment would make it a 100% safe build for HC for a beginner. The whole idea of the build is to use mobility to control the flow of the combat as it’s core defense mechanic. If you can’t choose when to engage and when to disengage you’d be caught up eventually and killed.

I have a similar build, even wrote a guide for it. Unlike banana I play exclusively HC, so mine is technically HC-proven. But me being able to pull it off doesn’t mean that anyone would.

Yeah, sorry, i have no hardcore experience so i can only make common recommendations to make yourself more sturdy - high resistance overcaps, high phys res, more health, more attack speed and high adcth value. People like Stupid Dragon are better advisers for HC.

One thing i can say: despite orientation to softcore and high dmg, this char is surprisingly sturdy. So there is a good chance to make it HC viable for dungeons, lower shards and lower Crucible. You will have to have Inquisitor’s Seal, high CC res, attack speed and adcth values for constant leech and in theory you won’t die in said intances.