Hello, after some break from GD I am back with basically one build but two setups. It’s my take on classic - melee krieg spellbinder, one setup is dual-wield and second one 2hander. Both very close performance, made to be tanks and boss killers but it can go sub6 min Crucible too. Not fastest in the universe but very solid and safe, should be HC viable.
The only difference in performance is 2hander being slighty faster in Crucible due to more AoE but slower vs superbosses due to less single target damage. Very cosmetic differences, if you are interested builds then choose the one you like more. 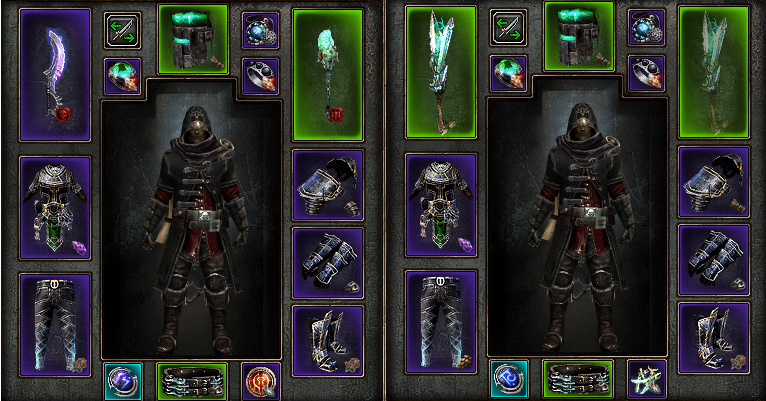 Little difference in devotions is obvious, for 2H we need Kraken, for DW not.

Gear choices which I want to explain:
Helmet - I’ve tested Krieg 5 parts too, but it was around ~10 seconds slower average in Crucible and for Ravager, little bit less tanky due to lack of 15% increased armor and 15% more attack speed which may be hard to squeeze - altough I passed sr100 with it too. For this rare one we can fish for various mods, aether damage/multi resistances prefered. With Krieg variant some components/auguments swaps are must.

Weapons - For DW Mindwarp + Heart of Theodin (with Aetherfire prefix preferable + some Attack speed suffix), we need Fleshwarped strikes from it. For 2H Lucius Blade-Arm (same mods as Heart of Theodin) is best choice - huge damage, flat one and attack speed for Reckless Power + Air Strike on attack which looks cool, has nice aoe and additional %RR.

Jewelery - Conduit is pretty flexible but RR from SS is best one, another worth option is Impaired Air for Ravenous Earth or Aether Bone Harvest. Rings for RR and vitality-aether conversion, couldn’t find better choice.

Relic - Uroboruuk’s Reaping is better for 2H due to converted vitality and huge weapon damage, it’s very nice Aoe addition for Crucible. For DW I had better results with Agrivix Malice.

Pants - may be controversial choice for Crucible due to Knock Down (I guess I could lost few seconds because of it) but I took it because of damage/resistances we need and especially OA increase for superbosses which require a lot of it to be fast.

Performance
Crucible
5:59 with DW version, slighty less AoE hurts, probably I could do it better but sub6 run is there

Average a little bit over 6min.

SR 80 full room agro - just to show there is nothing to fear during 75-76 farming. I suggest to agroabuse anyway because game allows to do that and it’s easier.

Ravager (OA potions for few more crits, not a big deal, 5-10 seconds faster maybe than without)

Just a question. Why RE? 5 Ill omen points give better DR, and lasts 1s longer.

I would say crate boss is not so bad for some meeles with necromancer or arcanist support like battlemages/spellbinders/deathknights (mot or mirror op) but harder for sure than with aoe bombers/pets/retaliations. Wasn’t very hard, I died once with DW setup because I wanted to speedrun him, at something like ~1:20 time I failed on 1% health

I took RE because I am more used to it, I feel more comfortable with insta dr before spreading omen but it’s probably more like personal preference.

Oh and thanks for mentioning me.

I will post soon Lucius build I am trying. But Battlemage.

Thanks! I was trying Lucius Battlemage too with aether cadence conduit but only short tests which did not pleased me. It was okay for 75-76 farming, couldn’t pass Ravager’s 1st phase and his health was moving down very slowly compared to Spellbinder (it would be 3-4min or more if I could somehow survive it). I don’t know how it would perform in Crucible but lack of aether RR from necromancer and SS conduit was very noticable.

Do you have some current results already?

Thanks! I was trying Lucius Battlemage too with aether cadence conduit but only short tests which did not pleased me. It was okay for 75-76 farming, couldn’t pass Ravager’s 1st phase and his health was moving down very slowly compared to Spellbinder (it would be 3-4min or more if I could somehow survive it). I don’t know how it would perform in Crucible but lack of aether RR from necromancer and SS conduit was very noticable.

Do you have some current results already?

BM will be less tanky due to less active defenses.

Also build it for Crucible primarily and with more offensive procs (lack good proceed). Haven’t tested it outside of CR yet but my fastest run is 5:12 or something like that.

Nice one! Could you send me grimtools on PM? I wonder how you built it, maybe I made mistake building it directly like this binder.

Sweet build you’ve got here @AlkamosHater - might give it a whirl for my next playthrough.

I love the shift from active to passive defense for the binder. I remember the times when Aeon was set in stone.

Thanks! Well, most tankyness comes just from being Spellbinder but this vitality conversion meta do the job too (Grey’s Dervish as example with sub6 crucible and sr100 at the same time).

n00b question…but…how do you unlock dual wield on this build?! (Just picked up the game a few weeks ago. I love it but have so much to learn!)

The medal on the dual wield build allows both melee and ranged dual wielding.

@anonymous It’s probably easier to just farm the Lucius Blade-Arm and go 2handed first if you are playing through the game and leveling up though. Between that and an Ascended Casque for huge Attack Speed mods, you should do well. You can switch to DW when you get a Mindwarp and get a DW-enabling medal later. Just a thought!

I appreciate the reply! So the earliest way to unlock this prior to that high end medal is through the Bladesworn Talisman relic at level 25?

Yes, that would be the earliest.

As people said, you need medal to unlock dual-wielding on spellbinder. For beginner I would go with 2H version (1 item less to farm) because it has some more flexibility for items. Switch to DW version later.
I’m glad you like the build, good choice for fresh player because almost everything is target-farmable