The Paladin (Inquisitor, Oathkeeper) is a class that most people consider to be a mediocre class at best (e.g. see here [1.1.8.1] Grim Dawn SUBJECTIVE Class Rankings - Post your personal rankings here and we'll pool it into a singular list of sorts). However, the motivation behind this guide / build was not to improve the reputation of the class, it started solely with the intention to have a fun to play build, which could later use two Oathbearers (https://www.grimtools.com/db/items/12630). So I started to level a dual wield ranged (dw ranged) paladin around one year ago and while the levelling was quite fun, the level 94+ build had quite some room to improve. So I revisted the concept and levelled a second dw ranged Paladin to level 100, this time with a much more satisfactory result.

The Build Compendium X (Forgotten Gods) has some Paladin end game builds supporting different play styles, most of them are not top performers, and ranged retaliation builds were likely affected by the latest patches. The number of shared non retal ranged end game Paladins is rather limited, the latest ones use either a shield for improved defense ([1.1.9.0] Aether Rutnick Blaster Paladin - Ravager, Mogdrogen, SR 80, Crucible 170) or is a physical dw Paladin (Double pistol Paladin). There is currently already one levelling guide / budget build for this specific class in the compedium (Shield Throwing Paladin: [1.1.8.1] Fire Shield Throw Paladin from scratch - build journal and guide), another older guide covers levelling a dw ranged Tactician ([1.1.2.3] Beginner's/budget project-DW pierce ranged Tactician).

Only self-found gear and self-found crafting materials were used while levelling. Also, no mandates were transferred, writs were bought as soon as possible. However, all necessary blueprints were already found with earlier characters. Blueprints for high level relics might be problematic, so use the best one you currently have at hand (here: quite long Guile works rather well, the replacement should have +1 to all skills in Inquisitor). The character was started in 1.1.8.1, 1.1.9.0 came with level 84. 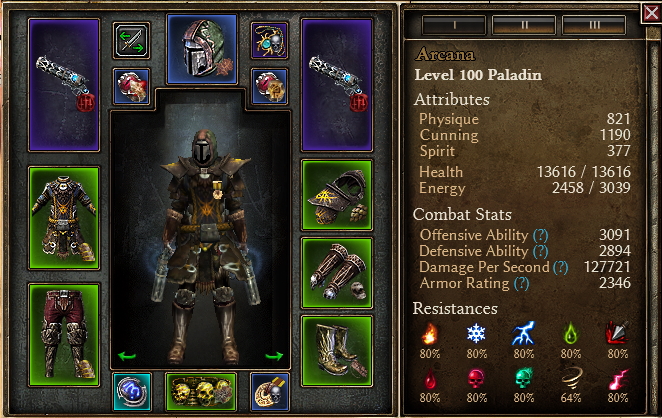 Most attribute points were invested into Cunning, one point in Spirit was necessary for the amulett (it require 376), 20 points in Physique for defense ability (DA) bonus. The necessary resistance can be reached without specific pre- or suffixes. Beside of the pants, the gear can either be directly bought from faction vendors or the recipe is available there.

Go Farming: The character is able to farm totems, challenge dungeons, nemesis and low shards in the Shattered Realm in ultimate. With 1.1.9.0 a natural improvement are Oathbeares instead of Bloodbores. The current list of endgame builds can be found in the Build Compendium X (Forgotten Gods).

Woah, the first gunner guide in a long time, look at this stuff @eardianm

I’m wondering why you don’t get the Azrakaa proc, you can sacrifice the left shoulders of Unknown Soldier to get it, and Storm Spread is free and a good proccer, the attack speed remains at 198% with average rolls and you get a ton more aoe. In fact you could add why you take those devotions, I believe this can be useful for a beginner to understand why choices are made and what is important when making a path

Nice. I’ve toyed with phys/pierce based on viper pistols a bit in grimtools, but the amount of total flat looked somewhat lackluster. Surprised that you’ve managed to squeeze 120k out of such setup.

Maybe I’ll update my pierce Tactician too one day, but so far not a priority.

I’m wondering why you don’t get the Azrakaa proc, you can sacrifice the left shoulders of Unknown Soldier to get it, and Storm Spread is free and a good proccer, the attack speed remains at 198% with average rolls and you get a ton more aoe

Well, the short answer is - I simply missed it. [the longer explanation would be: since the proc starts on the character, it didn’t make that much sense at the beginning of the levelling, because you can still fight at a distance, but I never revisited that decision later :stupid error:]. And as you can power shop a lot of gear from the faction vendors, capped attack speed is more less guaranteed even with the last Azrakaa node.

In fact you could add why you take those devotions

Thx :). I have thought about an oppressor using two vipers, and using either Gargoyle Spine and Myrmidon Chestguard or a Gladiator’s distinction belt for the vitality to physical conversion. But was not satisfied so far with my theoretical results [from the damage side it seems okish, but other stuff was lacking].

The damage here came out really nice (and as my first try lacked in this regard, luckily), especially as the sheet dps are only half of the truth here [dummy kill time is around 31 - 32 seconds, perhaps with maxed Azrakaa proc even slightly faster]. All the small bits of flat damage (skills, gear, devotion, augments) really add up and getting most of it converted to pierce really helps.

If that is true then it has even more damage than my Blademaster, which is around 35 seconds.

I thought your Blademaster is below 30 seconds, while the warder ist around 35?

Edit: The sheet damage seemly does not factor in dw AA replacer and assumes “always” 50% of all attacks are dw, while the rest is single handed. This should imply that having almost 100% (well, 90+%) dw attacks, the sheet dps value should be multiplicated by something around 1.33 to have a more reasonable dps estimate (from 1.5 to 2), or?

Right, I misremembered it.

Nice version of a forgotten spec!

I added build to the beginner compendium

I did. You really need to think out of the box with this one.

Is that a pun? Maybe storm box of elgoloth will become important?

Not an intended one, but yes, if you try to build an Aether Rutnick Paladin you’ll probably have no choice but to use aether Stormbox gear.

But what I meant is, given the difficulty of finding gear to use it with, there’s very little point in clinging to it’s mods when you can just simply use them on FS Purifier instead.

Edit: fuck, now I want to try it

be still my beating heart,
this looks gorgeous, not just from a paladin pov but i love the budget setup for this

What i did (and gave up, which is why it’s at level 94 currently) just before the patch hit was to build an oppressor with dual wielding of the epic pistols Bysmiel Handcannons. From my understanding, the issue with dual wielding physical pistols is that all non-converted physical damage(basically flat physical, pistol’s weapon damage, etc) all have to go through armor individually which means that for monsters with higher armor value the flat physical sources and pistols’ main damage get snapped out of existence. Pierce doesnt have that issue, but suffers from less RR (no -%rr from oathkeeper if going paladin). By going Vitality-based pistols and then fully converting them via gladiator belt I basically bypassed the armor reduction for pistols and pistol procs. It also happens to be the only vit/elemental pistol i could find with +% physical damage on them since the build is somewhat lacking in that department.
Edit: Well there’s also the stronghold pistols and cindercore but they suffer from the same issue of physical to x damage conversion and on top of that has worse procs/stats.

Sadly the patch slapped physical to vit conversion onto the handcannons and basically threw the damage of physical devotion procs and wps procs on a discount so i cant be arsed to continue farming/optimizing the build, but someone may find it useful.

I started to doodle this out with sandspitters, looks like we have a bunch of shared gear options so big thumbs up for doing the hard work on this!

Any particular reason you didn’t go for Ulzaad in your devotions? Seems pretty good with added physical damage, bonus to pierce damage, armor bonus and added retaliation. Also Bards Harp would be an option too. Any thoughts on that?

no reason in special, more like personal preference - as I decided to go for the permanent damage boni - Azrakaa / Unknown Soldier - there were no points left. (further limiting: I prefer a slightly stronger defense - so I avoid a full damage path and e.g. tend to include Solemn Watcher)

“Hunter” devotion? Did you mean “Panther”? Can’t find no Hunter, but Panther seems to check all the boxes - it gives some crit damage, offernsive ability, blue devotion and it doesn’t require blue crossroads to allocate… plus it’s in the final build but not listed on devotion list? 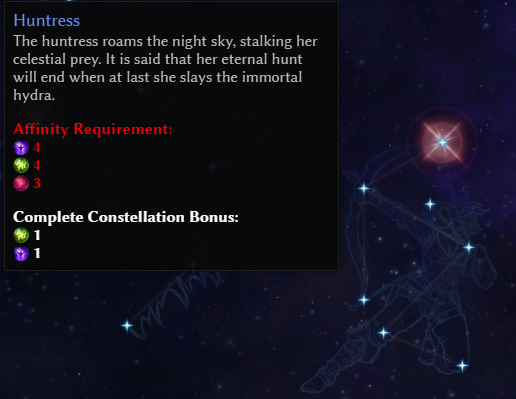 Not really - you’re supposed to take Lizard after “Hunter”, and you need blue point for that, Panther gives just that. I think it’s a typo.
Plus Panther is in the finished build while not being listed in it.