This is a tanky melee Paladin, built to facetank superbosses and push high SR. 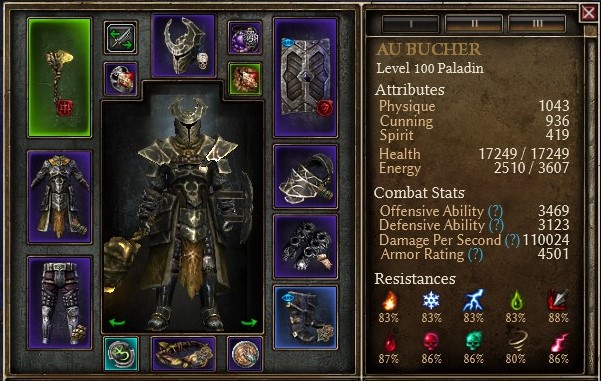 1.1.9.2 update
With the introduction of patch 1.1.9.2 and the update of physical conversion / armor interaction, I thought this build was going to suffer. However, there were many buffs to compensate this loss of hidden power, including tons of OA on Octavius and 100% conversion on gloves. I reworked the whole build it is stronger than ever!

Devotion discussion
What we want here is Light of Empyrion for the damage reduction debuff. No reason not to use use Bear now, which procs like mad with Storm Box. Rest is standard tanky physical stuff.

Skill points distribution
With Steelbloom Powder and additional OA on Octavius, Judgment is no longer necessary to get Assassin’s Mark on superbosses. Max Ascension if you want, but I prefer the racial damage on Steel Resolve and the temporary OA buff on Clarity of Purpose.

Big thanks to @Ulvar1 for his much needed help with the build!

Nice work with the build! Also fun to see calla fights without pharma

Nice to see this get tested and posted. I had a similar idea some weeks ago and threw some GT links together for it but went with 3pc Avenger and as much focus on Shattering Smash/Smite as I could like this: https://www.grimtools.com/calc/M2gQR0gZ. And this for a Warlord version: https://www.grimtools.com/calc/eZP8WoKZ. I like the tankiness that Octavius adds though, never would have considered it

Other than that, congrats on your first build!

Oops sorry about that, I’m kind of a Crucible noob, I just added that because I know some people are interested in Crucible timers. Fixing the title right now!

As Lee said, there on forum our “metric” for Crucible is 150-170. With tanky characters you can attempt too “170ex” which is extra spawn + 0 buffs/banners.

IT’S A FACETANKER. Nice build.
Check this @grey-maybe, a paladin that is up to date.

just to remind you, he also posted this paladin

[Fixed%20Rutnick%20paladin] In game, with all buffs active. This build revolves around the new Rutnick Pistol introduced in patch 1.1.8.1. The Watcher of Erulan adds some much needed tankiness and a nice skill modifier to Smite on top of the modifiers from the Bonemonger set. The Magelord rings allows us to cap Inquisitor Seal and convert about half of the elemental damage from multiple sources to aether. Grimtools: https://www.grimtools.com/calc/1NXQpjB2 Apparently grimtools does not displa…

Congrats on the build, I really dig it!

With tanky characters you can attempt too “170ex” which is extra spawn + 0 buffs/banners.

I noticed that with current setup, if you put one point in rune of kalastor, this will put it at lvl 14 (at least that is what grimtools tells me for 1.1.9.0 build).
The current modifiers on your items already convert almost all the dammage for rune of Kalastor dammage to physical.
This would get you a dps increase I think?

Octavius set is indeed oriented towards rune of Kalastor and the medal I use also provides a bonus to it. However, these are not the reason I picked these items, they just happened to provide the right stats for the build. It’s already kind of a piano build, plus rune of Kalastor at 1 point would deal less damage than siegebreaker due to the lack of weapon damage. Would advise to just go full Octavius if you want to use rune of Kalastor.

Platemail of Octavius and Mythical Chausses of Barbaros both require 1035 Physique while the character’s physique attribute goes only up to 1034. In this case you can’t equip those two pieces. What am I doing wrong?

Some of the items (e.g. gargabol ring, final march, octavius shoulders) have variable physique rolls. I expect this is where the difference is made up.

Added SR85 boss run. It’s easier than before since I don’t have to worry about fighting multiple bosses at the same time (I never understood camera exploit).

Put my patience to the test to reach SR 90, added video of boss room as proof. Probably can’t go higher since damage is rather low.

Also adjusted the build with a few more points in Smite. Damage is slightly better, but still bad in Crucible.

Have you tried working in Dire Bear constellation for the armor reduction? It might have an impact on certain bosses for such an amount on unconverted physical? Pure curiosity on my part.

I haven’t tried it. I could give up Toad and the 3 nodes in Obelisk to afford that. Losing a lot of armor and DA though. Guess it’s worth a shot.