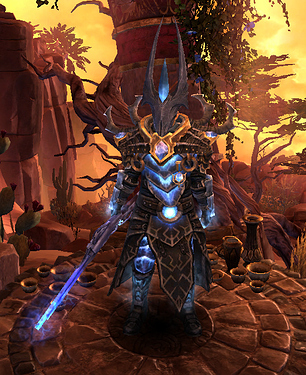 Hi and welcome one more build post of mine. I read in this thread [Feedback] The Great Ranged Balance Discussion about ranged auto attack builds. I had a ranged vindicator that I decided to play around witht to provide insight for that discussion so here we are. Also English is not my best language but perhaps you guys and girls understand.

I play self found gear, and all alone. I only use GD stash for saving items and searching for them. I level up my chars using speed level technique similar to Rektbyprotoss. My build-style is to try and make non-standard builds often centered around a concept or fun item that I find and not sets and such. In this case it was Elgoloth weapon that was focus. Sometimes build won’t work but sometimes you get nice surprises which I like.

NOTE: attack speed in Grim Tools is bugged, it does not display the attack speed from Ranged Expertice when you use 2H ranged weapons. 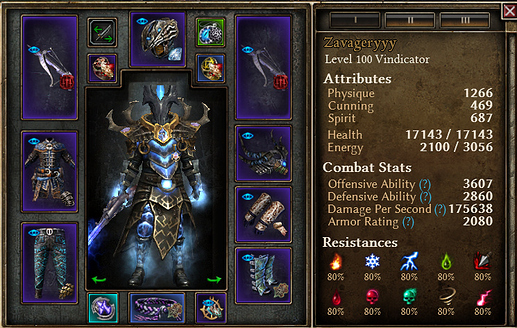 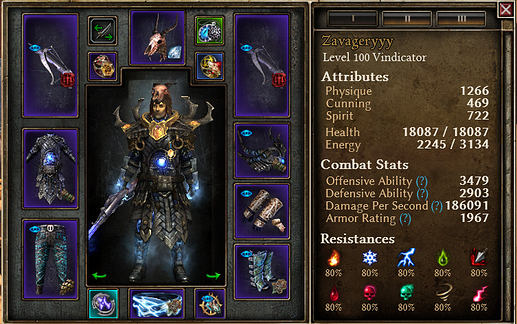 Performance:
Both version can do SR 80 kind of consistent. I have died once in shards to grava by not dodging ball good so was my fault. The shards can be much harder than boss room because poor AoE and you need to play some smart.

Once in boss room it is pretty easy. 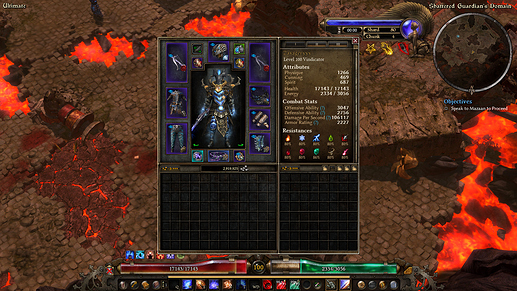 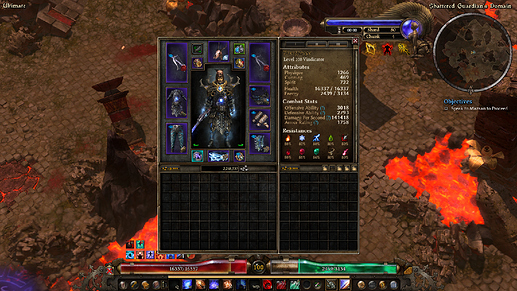 Should be very good for SR 65-66 farmer if you wanna get some nice items quick. Perhaps use maelstrom here for more AOE and speed. In higher shards maelstrom damage was garbage according to some tests by other. See references above.

Crucible not played because takes time for me to get to 150. Should not be very good (no 5min runs here, perhaps 6min) because lack of AoE. Perhaps maelstrom and storm totem more worth there because monsters are not as strong as in high shards?

Leveling
I leveled this char “speed level” style using tokens, Lokarrs set and experience potions. I played with storm box, storm totem and wind devil maelstrom for most of the time until I got to level 94 in about 9 hours or so. I still try to improve this method and my execution of it but it is not main focus for my playing

This concludes build, thanks for reading let me know if you have questions or suggestions of improvements. In particular I have many great thanks to @Nery and @eardianm

Nice build and clearly it can handle SR quite well.

I have not tested it myself, but I would try something different. I think storm spread is the worst wps (in no pass through circumstances); nice for devotion proc but really nothing amazing in the AoE department. Max bursting round would do way more since it deals the whole WD% to every target in the radius. Trying high OA Upheaval + only bursting round is another option to maximise AoE (whilst keeping single target damage respectable from Upheaval).

Thanks I will try. I did not consider storm spred for aoe perhaps was bad english. Storm spred good shotgun for single

Also worth noting that Storm Spread is not even very good at single target damage compared to bursting round. Personally I think storm spread should have native pass through because dealing 34% wd or w/e it is to 4 separate targets is terrible.

Well really it’s 240 something % weapon damage per shot in his set up… Because the weapon damage from savagery is applied to each projectile as well. So in a shotgun situation vs a big nem is nearly 1000% weapon damage

Yep, less than max bursting round, which also hits everything in radius. You get the savagery flat damage with SS 1 pointed. It should be so much better to max bursting instead of SS.

You are right that SS gets deals more flat lightning from instances from Savagery as well as it’s own flat lightning, so it will do more damage overall vs single target, but the AoE potential is really bad vs Bursting.

Yep, less than max bursting round, which also hits everything in radius. You get the savagery flat damage with SS 1 pointed. It should be so much better to max bursting instead of SS.

You are right that SS gets deals more flat lightning from instances from Savagery as well as it’s own flat lightning, so it will do more damage overall vs single target, but the AoE potential is really bad vs Bursting.

yeah my bad I was treating the WD as additive, but it is multiplicative. SS and jaxon rings are still the best when it comes to single target for any ranged build. It is even more true when paired with DW, firestrike, or 100% passthrough. I digress though.

This did give me the idea to throw this thing together on GT though… https://www.grimtools.com/calc/lNkmOzlV

This did give me the idea to throw this thing together on GT though… https://www.grimtools.com/calc/lNkmOzlV

Yeah I have similar build lined up

It is even more true when paired with DW, firestrike, or 100% passthrough. I digress though.

Absolutely. Storm Spread is godly for Fire Strike and good with pass-through. A situation where SS is better than chilling rounds for single target should be pretty niche though (Fire Strike + pass through?), unless I am missing something.

I now tested this suggestion with just using upheaval and bursting rounds. It was total garbage. Sure some more aoe but single target and over all kill speed went down large without that crazy shotgun damage from storm spread https://www.grimtools.com/calc/q2mmb8l2

Worth noting, Storm Spread on 2-handed last I played with it fires 2 waves of 4 projectiles. Up close/ point-blank to something, shotgunning with all 8 shots is a huge amount of damage, easily one of ranged Inquisitor’s best sources for single target damage. You’re right that it’s pretty bad for AoE without pass-through.

Should be the same as single pistol, the shotgun wps still fire as if dual wielding so you get 2x projectiles on storm spread and jaxxon

Thanks for throwing this up @Ulvar1! Still working on my version. @Crittrain absolutely hated it for crucible which sounds about right, but the crazy single target damage and solid tank with just enough aoe should make it interesting for SR pushing, so that’s where I’m going to route mine. Haven’t had a ton of time to test yet though.

Worth noting, Storm Spread on 2-handed last I played with it fires 2 waves of 4 projectiles. Up close/ point-blank to something, shotgunning with all 8 shots is a huge amount of damage, easily one of ranged Inquisitor’s best sources for single target damage. You’re right that it’s pretty bad for AoE without pass-through.

OK, so it does double or 2 more than listed for 2H? Even so, the rate of scaling is slow, leaving it at rank 9 with 1 skill point, and the rest in bursting round should still be most efficient for a build lacking AoE.

Edit: Storm Spread really does shoot 8 projectiles, that is far more powerful than the description leads you to think!

I was thinking about revisit this build https://www.grimtools.com/calc/q2MarzW2 by @RektbyProtoss bumping up storm spread to 4 projectiles (i.e. 8) and using jaxon bullet rings & getting more oa

Fwiw I’m still taking multiple boss pulls at SR80 without too much hassle as I don’t move the camera. Absolutely an SR pusher compared to poor crucible farmer results

edit: Cleared SR85 without moving camera, but feels like I’m at the end of the line without solo pulling bosses now. With -armor and -hp mods, Fabius can sneak in some one shots through seal and dot crits feel real bad

That are pretty amazin result!

Elgoloth cross-bow got a small buff, might do some updates and more SR testings later if/when there is a new hotfix or something. Updating builds 12h after patch is kinda meaningless I think.

Also hydra got very nice buff, gonna consider rework the devotions a bit to fit it in

I am also gonna try to add some more AoE into the build, while not sacrificing defense. Keep in mind though that my original idea was just to see how far one can take 2H ranged savagery with Elgoloth.

Edit: sheet savagery DPS is now 187k with the ludrigan version all procs up (around +10k more compared to 1.1.8.1 patch)

Ultos shoulders got ranks to savagery, which means we will get one free skill point to play with…

is there any video demonstration of this build??? leveling a 2H Shaman was looking for a build… this looked interesting