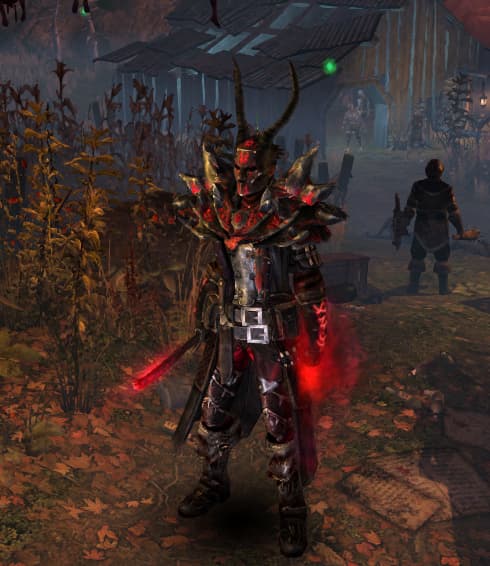 Hybrid pets: The holy grail of hipster builds. It’s not the first time I’ve tried, but it’s the most successful. Plus, playing artillery mage while hiding behind your pets is actually kind of fun. Please enjoy this Cult of Ch’thon-themed chaos caster Cabalist, featuring the Oblivion relic skill, multiple kinds of exploding pets, and just generally a very satisfying evil void mage aesthetic.

Tragically (for my hipster cred, at least), a pretty similar build concept was already done by thepowerofmediocrity a few months back. Hat tip for having my best ideas before I did!

I’m counting this build as sufficiently different to be worth posting: 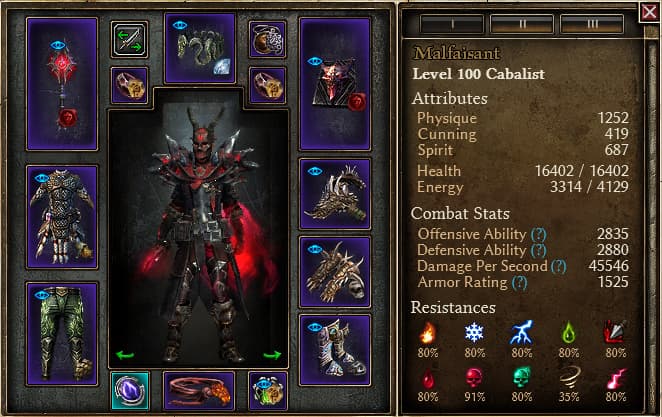 Stats with Blood of Dreeg & Hellfire, but no temp buffs. Tooltip DPS is Oblivion.

I leveled this build as fire-based pets (focused on skeletons + hellhound), using Korvaak’s Burning-Blade, Black Grimoire of Og’Napesh, Zaria’s Pendant, Halion’s Crest, and Spectral Crown, with the rest of the gear used to fill in generic stats. I like this setup because fire-based pets can use the build’s endgame devotions without modification, so you don’t have to respec at 94 and level any devotions from scratch.

If you like video guides, RektByProtoss leveled a fire pet Cabalist last year, and published a build overview video and the VoDs of his leveling, which you might find helpful.

If that isn’t your cup of tea, you can level this using any decent Cabalist leveling build. You can find great tips for leveling pet builds in Maya’s guide to pets, or skip pets entirely until endgame and level using something like the Cabalist variant of this vitality RE build by Nery.

For general leveling advice, check out these resources:

Thanks for reading; happy void-calling!

Pet hybrid builds are special kind of hell but in your case, you gave them hell

One thing for sure is hybrids are still unexplored and your build is very creative and fun. Also finaly pet build, which can actually proc these spiders, cause they are cool but pets have too low of a OA to crit reliably.

I’ve focused more on converting all my damage into chaos (mostly by using Darkblaze Source to convert the acid damage on Blight Fiends and Ghols’ spiders, but also via the alternate belt choice)

I saw this build and skimmed over it, and didn’t have the chance until now to read it over. Sadly, conversions that are baked into area-wide buffs like Blood of Dreeg don’t actually work with pets. The reasoning is that pets are considered “allies” for the sake of wide radius buffs, and these buffs having conversion in them ultimately gimped the multiplayer experience by converting all the other players’ skills into a non-useful type.

Since that’s the case, you can switch the amulet to the Chaos RR Conduit that I use and it will be roughly a straight upgrade. You don’t have any real sources of Acid and Poison with the exception of the flat Acid from Blood of Dreeg which would be used on Oblivion; if it doesn’t explicitly say “bonus to all pets” for a conversion, your Blight Fiend’s Acid damage will remain Acid.

Honestly, that makes your feats even more impressive.

I saw this build and skimmed over it, and didn’t have the chance until now to read it over. Sadly, conversions that are baked into area-wide buffs like Blood of Dreeg don’t actually work with pets. The reasoning is that pets are considered “allies” for the sake of wide radius buffs, and these buffs having conversion in them ultimately gimped the multiplayer experience by converting all the other players’ skills into a non-useful type.

I previously thought this was true, asked in the Discord to confirm, and was told the opposite. Do you happen to have a link to testing or dev comments for this? If not I can try and learn how Grim Internals work to do it myself.

If you’re right that probably changes quite a bit about the build…all the sources of flat acid damage for pets are a lot worse than I thought.

Oh… didn’t notice it either.

But yeah, conversions on AoE skills like Blood of Dreeg doesn’t work on pets. Can confirm it as well.

asked in the Discord to confirm

Never ask in discord about pets unless Sigatrev, Nery, AlkamosHater, Crittrain, Evil_Baka or Ceno happen to be in there to answer

Alas. Time to reconsider some items.

Off-hand is to convert Reap Spirit damage (both initial hit and summon) to Chaos.

Oblivion/belt are to have a non-CD attack, and to convert my own damage into Chaos.

Of course it doesn’t perform well compared to non-hybrid pets. At this point, “hybrid pets aren’t good in GD” should not come as a surprise to anyone who’s been paying attention. That’s why it’s exciting to find hybrid pet builds that perform at even a “barely scraping through SR76” level.

Surely you get that there’s fun to be had in this game by optimizing within self-imposed constraints, rather than just playing the strongest builds all the time? That’s like…half of what this board does.

Therefore, for this build, it waste too much addition.

I am not talking about hybird pet is good or bad, actually in some conditions it can make more dmg, but I cant agree with waste bonus. Zantai reduce the bouns even every version. So, treasure every percentage of the bonus in game.

Finally, for SR, 10mins even 9mins is the basic limt time for one build, longer than this period, nope.

Just want to point out that not every build needs to be Sub 4min Cruci, SR 110+, 1min Celestial killers.

And Chaos, atleast on pet builds does not need much RR.

Also Pet damage not all getting converted to a single type is also fine. You will regularly see it in stuff like Briarthorn builds since bleed for eg can’t even be converted.