Grim Dawn completed! Thank you Crate for years of fun!

Sappy backstory: I used to have a friend that played GD with me. We spent hundreds of hours pre-AOM just making builds and screwing around, abandoning most at 75 or so. My friend got sick, and ended up in a coma with extremely little chance of ever waking up. I couldn’t do much for him, so I decided to at least honor our times together by completing our favorite game.

Since Shattered Realm is an infinite dungeon, it cannot be “completed”. Thus I just decided to clear just SR60 and buy the set to consider completing the content.

A quick note: I am firmly against copying others, so I didn’t do it with any “builds”, I never even read them (with the sole exception of yesterday, checking Maya’s summoner ideas for reference - but summoners bore me, so this was just research ;)). I cleared the content with my own ideas of builds, non-meta as they may be. Though, judging by the power of most of them (facetanking ravager, clearing cruci 170 without breaking a sweat) they are pretty meta without me knowing it.

Today, I completed the final task - beating the Crate of Entertainment, thus, finishing my quest. 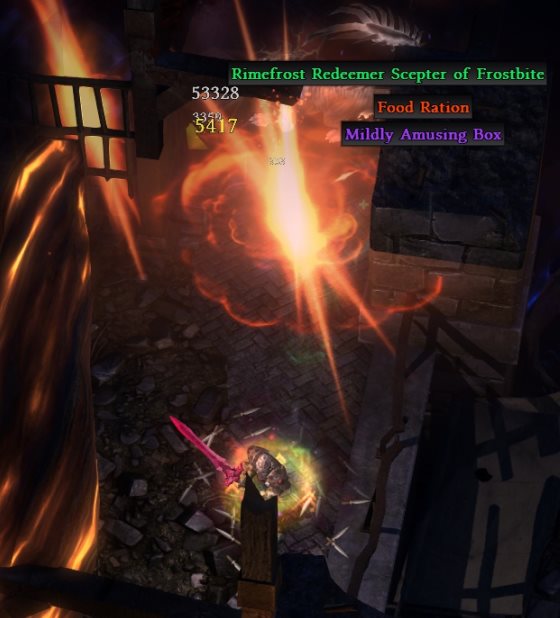 High points of the journey:

So… is this “THE END”? well, honestly, I am pretty tried after the whole Crate of Entertainment ordeal (honestly, it takes way too much effort to beat. And as a completionist, I had to beat it!). I wish it was a little less crazy (hint: CRATE NERF PLZ @Zantai) and possible to beat for a bigger amount of builds, not just summoners and high dps high regen builds. At least I devised the build that beat it myself, not copied others, haha

But enough of that Crate of Entertainment moaning. I’m pretty sure there will be 3 more achievements next patch (beat the Riggs dungeon boss, beat it at Ultimate, beat it in Hardcore), so I’ll be returning for that, and maybe for MOAR. I still want to finish my 300k DPS retal 2w Dervish and see how well it does against Crate of Entertainment. But for now, I need a vacation. A long one.

For now, thank you Crate for this fantastic game, years of fun, and thousands of hours sunk in. Hopefully, it’s not the end of the road for Grim Dawn, or Grim Dawn 2. Whether it’s a 3rd expansion, or GD2… I will be there, day one. Goodbye for now

Congrats on achieving your goals Kaiketsu and sorry to hear about your friend. Life sucks sometimes.

Sorry to hear about your friend

Man, so sad to hear about your friend!
You have my admiration and respect for carrying on like this in his name

Well, done, man. And sorry to hear about your friend. I hope you’ve told your friend about your exploits, I’m certain even if he can’t tell you, he’s hearing it.

I’m working on getting all the achievements as well. Currently working on the HC side of things for those.

Best to you and your friend, and hope to see you back in the future. 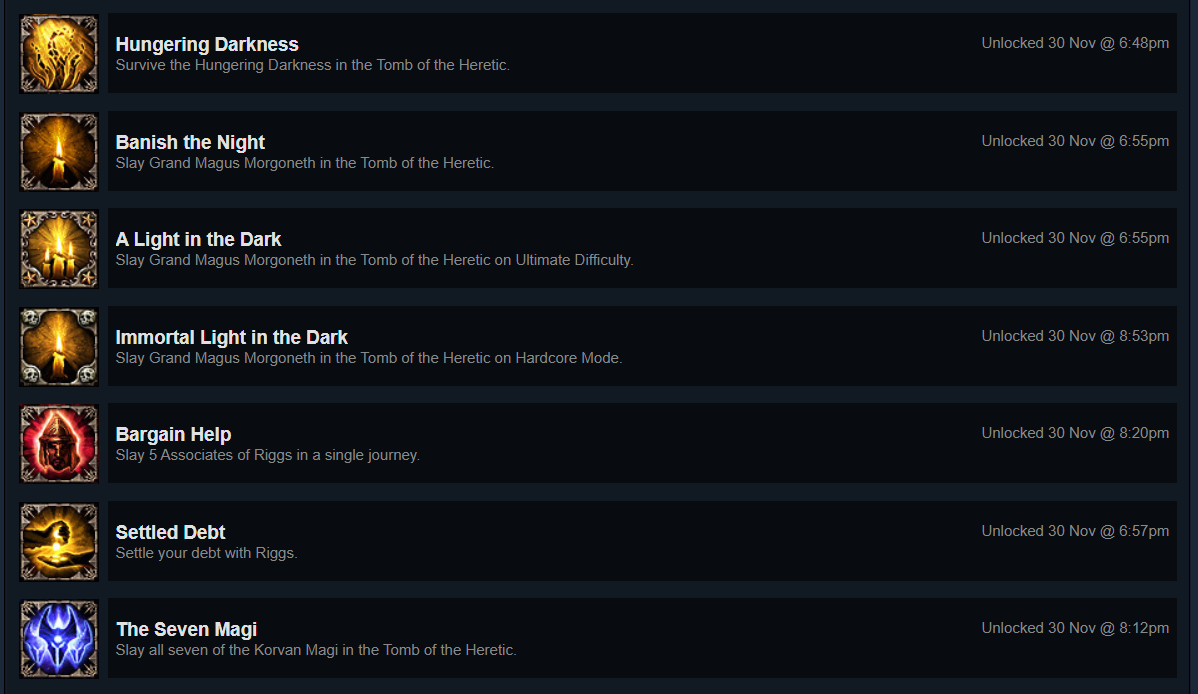 Tune in for the next Grim Misadventure on 9th December to see if Zantai will tell us more.

Of course! The world of Cairn needs you

Have you completed the Path of Perseverance quest? If not, then I encourage you to do so. One of the most rewarding and exciting experiences in GD. The idea is to play hardcore without choosing any class till level 100. Then reaching Vanguard of the Three in the last act and collecting a [top secret] reward!

Try it if you haven’t already done so.

Because of the urge to play some Grim Dawn after a long break, I did things I didn’t do last time:

It took a bit more of an understanding of their attacks and mechanics to beat them with a melee Warder, but I managed. I also defeated them with my two other builds.

Another thing I didn’t do was to finish all the quests on Ultimate with my main character. A minor thing, but I missed some and I had the opportunity to fix it this time.

I’ve also reviewed the changes between where I originally finished and now - and devised THE Ultimate character. I’m pretty sure it’s the most powerful build in the game. It’s absolutely crazy and excels in EVERYTHING - can beat Crucible, super high Shattered Realm levels, Ubers and that damn Crate of Entertainment thing. Seeing that it was NOT nerfed while Crate nerfed things like:

Makes me honestly question the understanding of the game’s balance in both the “meta” players here and our beloved Crate devs - do people really not know the best builds or are they just under the radar? Huh! Obviously, not sharing. I do not care for other people’s builds, so I - just like the last time - don’t know what’s “meta” and what is not. It is pretty funny however to, like, compare the overnerfed things like Cyclone Archon to both my builds (the old secret one and my newest invention) - I can only giggle as the power gap between those is HUGE.

I did reveal my Warder dude in this thread, tho. He’s nowhere near as good as those two mentioned above, but he still does the trick. I did upgrade him a bit so he no longer can beat the Crate of Entertainment, but does better in Shattered Realm. Still, he struggles to put as much AoE or single target presence as my top tier dogs. This is important because he’s not really able to comfortably pick off Arcane bosses from a distance like they can. And once that miltitude of buffs gets dispelled at even “low” SR of 60-70 - you’re dead. Bam. In the clutter of enemies, it’s sometimes hard to spot the Arcane ones. Especially if there’s more than one. I do avoid a lot of the problems by using the Eye of Korvaak constellation - which seems to perma-paralyze bosses due to my ridiculous crit rate with almost 3800 effective OA - but it’s still a gamble.

And of course, once you get to SR deep enough, you encounter so much DPS that it can break through 14-15k peak regen per second and kill you outright, requiring you to facetank less and do more hit and run - which is quite annoying.

Still, the animations of Zolhan’s and Markovian’s procs are super fun to watch.

What I didn’t do is to go for a world record in SR. Not trying to sound cocky here, but I’m pretty sure my uberbuild could have a shot at it with proper mutators and some “SR guardian arena” luck since some arena shapes force you to face almost all guardians at once and some don’t, and they seem to be picked at random. But the thing with SR is that I find it really boring after a while. It’s not Grim Dawn’s fault. Infinite dungeons were boring to me in other Hack & Slash games as well, such as Torchlight 1/2, Diablo3 or Path of Exile. It always feels a bit pointless to participate in an activity with no clear end.

My ultimate build is also not fully finished, as it would require double rare MIs to operate at peak efficiency. Very specific prefix&suffix. It would probably take months to drop that, if it would be possible at all. Oh well.

Hopefully, we’ll see more of Grim Dawn in the future. Will we? I mean, I obviously know there’s like zero chance for a third expansion, and at this point Crate is probably unlikely to release more free content, but… maybe, just maybe?

That’s about it for my little update. Cheers, friends.

No expansions, no. But …

Grim Misadventures is here! Last time, you had your first look at the new Crucible Arenas included with v1.1.7.0. But as you now have this update in your hands, that’s OLD NEWS. V1.1.7.0 was so last week, let’s talk about V1.1.8.0! You may recall as we teased you with this image when the new year rolled around… [Bridge] As you can imagine, priorities shifted, MOAR was added, then even MOAR, and here we are halfway through 2020 with no new areas in sight. But fear not, for their time is comin…

How’s your friend btw? Did he recover at all?

How’s your friend btw? Did he recover at all?

Thank you for asking. Unfortunately, my dear friend died about a year ago, never recovering from the vegetative state.

Life can be a massive ***** sometimes

Still you have good memories of fun times with him and they’ll always be with you.

Yeah, well, that’s life. Sometimes your friend is the first to go. In the end, we all will. Eternity will not see us separated.

Great to see Crate is still planning to release updates with content. Maybe a revision of the underpowered masteries and skils, at some point. I’d love to play a dual wielding dude, but Nightblade is just… lacking. Meh! And don’t get me started on skills like Grenado. No amount of +damage from items can fix those, perhaps a complex rebalancing would be more in place so that you can make a build based on those that remains viable in late SRs.

One can only hope.