Last time, we explored some of the environments of the upcoming new roguelike dungeon.

Today, we are going to delve deeper into just why v1.1.5.0 will be Grim Dawn’s largest free content update ever!

But first, some quick news on the impending hotfix v1.1.4.2. The hotfix, which includes some balance changes, is all but finished and is going through final testing. We expect it to go live this week!

So, as you already know, v1.1.5.0 will feature Grim Dawn’s 5th roguelike dungeon. It’s going to be a grand adventure that sees you exploring new locales to unlock ancient Korvan secrets and, ultimately, the roguelike dungeon itself.

For our upcoming major update, we are working on an extensive balance overhaul of all, and we really mean all, of the Rare Affixes and Epic items in the game. Even the oldest faction gear will be receiving love!

As Grim Dawn grew with two awesome expansions, some of the oldest gear in the game has lost some of its luster by comparison. This became especially apparent as we playtested the leveling experience for v1.1.4.0’s Veteran difficulty update.

With v1.1.5.0, we wanted to go back to the beginning and make acquiring gear during the leveling experience even more exciting. We reached out to the community, you may recall the thread we posted a few weeks ago regarding Rare Affixes, and reviewed what some of the player-favorite affixes were and why. Apart from the obvious powerful resistance stacking and crowd control reduction, some of the fun elements of getting a cool Rare item were the skill procs and skill bonuses. Getting a Monster Infrequent that stacks up just right to give you +5 to a skill can be amazing as you level.

So not only did we pump underperforming affixes full of tempting resists, we also increased the proc rates on all Rare affix skill procs and added many more skill bonuses to rare affixes. And for those of you shivering at the thought of a balancing update, fear not: your favorite OP affixes will not suffer. On the contrary, we want to copy some of what makes them so tempting over to other affixes.

We are going into Epic items with the same sort of mentality. Flesh out what’s awesome, update what’s not. Make Epics feel epic again. 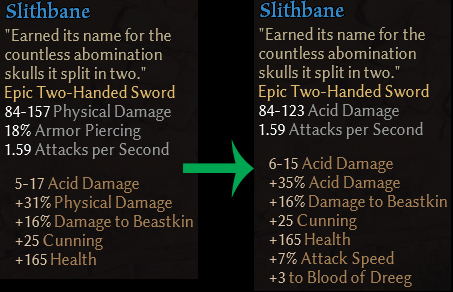 While the focus was on lower level gear, all of these changes will extend to the endgame as well!

Like knowing what is coming up next for Grim Dawn? Grim Misadventures are posted less frequently as we focus on supporting the expansion and its upcoming content updates. Check back on 09/30/2019 for the next Grim Misadventure.

Really cool to see lowlevel Epics getting pure magic damage bases. That alone should make them feel more unique and have a greater impact when the “right one” drops for the “right build.”

Looking awesome. Seems like hoarding all those crappy double rare MIs is going to pay off

Looking awesome. Seems like hoarding all those crappy double rare MIs is going to pay off

I sold a lot of them but now I can farm a lot more and stash them! Great incentive!

And for Epics…with a build, that already uses 2 Epics can´t wait to see the upgrades and the new possibilities.

Blues, rares and faction gear being more usable / closer in power to legendaries is going to make leveling a fresh char so much more enjoyable. Must have been a ton of work to do all this tuning.

You guys are so awesome, I just don’t have the words.

Already loving the upcoming patch. I might even consider raising a new toon.

Can’t guess what is still in store but that’s a great news!

All aboard the hype train!

This is the patch I’ve been waiting for. Forum is still going to remain green allergic but I will have my precioussssss

Once again, you guys go above and beyond what any playerbase could expect. It’s why you’ll always have my money for any game you make.

Slow res on green pants, my body is ready.

Great stuff as usual! can’t wait for the updates to come

All these arduous overhaul not only take time but burn out every brain cell that each Crate staff would have. Once it comes out, that would be a lot of feedback on these changes.
Take your time and take care.

I only expect praise for most of 1.1.5.0 as its blanket buffs. Sure some blues might punch above their pay grade but here’s Zantai flat out saying “we want your greens to be OP”