My reason for posting here – as opposed to the Feedback section, as I usually do – is to fill a gap in the lineup of builds available in these fora: although more than valid in their own right, the current takes on TSS tend to rely on creative or variegated setups that don’t fully reflect the potential of TSS, which can be better realized by a more focused (and thematically fitting) approach.

So, for the purpose of this post, I am a TSS monomaniac. I have two builds to offer: a Druid and a Warlock, both of which realize the same “whole Trozan” concept.

Both are designed to be unapologetically TSS-centric, pushing it as a primary skill and main source of damage. They’re meant to administer a healthy dose of whole-grain, unwhittled sky shards to your foes, and no sides.

The Druid – here dubbed the Cloudburst – was originally an AoM build, dusted off for FG in 1.1.2 with the explicit goal of setting a “Skybreach standard” by which to measure TSS damage in other setups. The Warlock – here dubbed the grounded Trozan – is a straightforward adaptation of the same concept.

I’ve tried a wealth of TSS builds: lightning, cold and dual-type Skybreach Druid as well as Cataclysm; cold Skybreach and Harra Spellbreaker with PB; aether/lightning Allagast in many ineffective variations; and finally Iskandra Mage Hunter, Sorcerer, and Templar. If you’d like to play TSS but haven’t chosen a setup, here’s my reasonably informed opinion:

You won’t be disappointed. It offers the best TSS experience available, both in terms of gameplay and overall effectiveness. And it doesn’t have to be this one, because there’s a range of alternative takes and variations that work just as well.

Special thanks to @mad_lee who suggested introducing Sigil of Consumption support to Trozan’s Skybreach and to those who voiced their support for the concept, and to Zantai, of course, for following through. Skybreach Warlock is a triumph.

Also, a small plea: Zantai, if you’re reaching for the velvet bag of graded nerf hammers, please select a light one. :P There seem to be precious few good Druids and Warlocks, and TSS-centric builds aren’t that common either. (And I like to think that these are among the most polished to be found for the skill.)

The “whole Trozan” approach brings TSS base damage to ~200k per cast on a 1.2s cooldown, plus 10k of frostburn per second up for up to 4.5 seconds, with a critical damage bonus around 130%.

Core items to realize this approach are the full Skybreach set, Starfury Emerald, and Rolderathis Tome; the latter is a green MI, but any affix will do. (See Itemization for details.)

The resulting builds embody the glass cannon archetype: they’re not meant to be forgiving or very safe, just safe enough to avoid frustration. Even the Warlock, however resilient, can and will be bursted in either Crucible or SR.

(It should be noted that, despite the excellent clearing times, neither of these builds is a Crucible farmer: they die too easily, and once you’re out of tributes, they’ll struggle to cope without the defensive blessings. They can become reliable enough with practice and care, but you will still die when things go wrong.)

So, both these builds realize the same concept. But how do Warlock and Druid compare, in terms of gameplay?

I favor Warlock, but you can use the points above to inform your own preference. 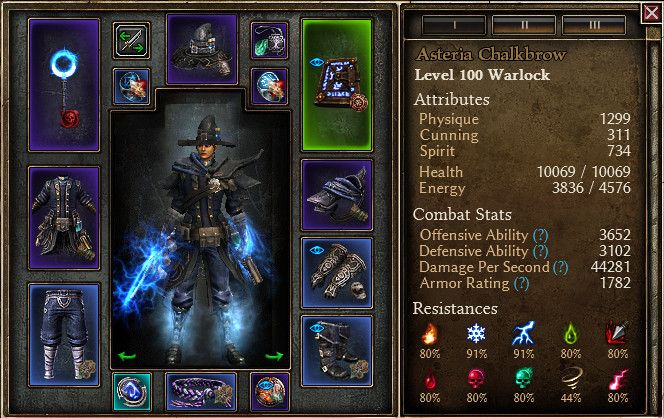 Base setup: Trozan, Grounded
Example of a hyperaggressive setup (not recommended): did I hear someone say “Arcanist will have the highest OA”?

You might want to play this if you’re looking for:

Base setup: the Cloudburst
Example of a rare greens setup: we’re still faster than nasty warlockses, my preciouss.

You might want to play this if you’re looking for:

Let TSS set the pace. Stand your ground where you can and use MoE aggressively to maximize TSS damage against multiple enemies. Sigils or not, don’t try to brawl: kite against heavy melee hitters and use the environment to interfere with their pathing.

As Druid, refresh Aether Corruption as needed, but try to keep the full number of wind devils and totems online to maximize RR and devotion procs.

As Warlock, force enemies to fight on your sigils. Use multiple overlapping sigils against individual foes or small groups to maximize damage and lifesteal. Watch out for nukes, they can blot out your health pool.

To understand why this approach is effective, we need only look at the damage profile of TSS.

Nominally, TSS is a CD spell that deals cold and lightning damage in equal parts. However, their respective methods of delivery differ: lightning is only found in the flat damage and therein it prevails, while cold has a hefty DoT. Since DoTs from the same source (a shard) do not stack, this asymmetry is magnified by CDR, which priviliges flat and thus lightning damage.

At the native cooldown of 3s, the damage of TSS maintains an even distribution: both the flat and over-time damage components are applied once, with no overlap. However, as CDR increases, the flat damage – stronger in lightning – will be applied increasingly often, while DoTs will only be renewed. By the time we reach cooldowns of 1.1–1.2s, we will be delivering flat damage nearly thrice as often as DoTs.

So, for a high-CDR, TSS-centric approach, it is natural to go the way of lightning – a damage type which also happens to offer excellent devotion routes.

Mechanical considerations aside, the the ultimate effectivenes of TSS in the two builds presented here is the result of many factors:

Needless to say, many of these factors contribute to the global damage output of sigils, wind devils, and devotions as well; by extension, they also contribute to our survivability. But TSS is what I care about, if it wasn’t clear already. :P

Wow, what’s that time for Warlock

No longer meme class, confirmed! I was from minority of people voting for Occultist support and frankly prefer it even against Druid. And new Sigil looks fantastic!

Wow, what’s that time for Warlock

The time for greatness, at long last!

I opted for a more proc heavy version with cataclysm+cinder gloves and going cold/lightning split with murmur/amatok alongside ultos/widow. Performance was roughly the same as yours in crucible (bit slower, but I’m bad), but it looks awesome if you’re a visual/proc whore like myself

Tempest is really fun devotion for this build too for you lightning lovers! You have a lightning storm active 100% of the time

TSS Warlock was a great idea.

Too bad that the new TSS animation looks bad. Much weaker than the old one.

I guess I am besically the Trozan guy in the GD lore, lol

Solid build, cheeky (but correct) choice to go for full lightning in devotions.

Hey Nery,
Regarding your remark, is it in the context of this build or did Crate change anything to the Sigil of Consumption?

I am asking because when I like the idea of that skill very much, but I did not see a lot of builds using that skill too much, and even fewer as an important source of dmg/sustain. I think there is a build cantered around SoC and Inquisitor seal, but I believe that requires some endgame set.

I would love to use it myself, but I guess I need gear for it?

Regarding your remark, is it in the context of this build or did Crate change anything to the Sigil of Consumption?

In particlar, word of inquisitor abalon

Inquisitor seal deals like 0 damage, so you do not build around it to deal damage.

The base Druid setup hadn’t been updated for the resistance nerfs to Bloodied Crystal. It’s fixed now.

Solid build, cheeky (but correct) choice to go for full lightning in devotions.

To be fair, both these builds retain +2000% cold damage and ~70% RR. They may not pursue cold but they don’t neglect it either.

Inquisitor seal deals like 0 damage, so you do not build around it to deal damage.

That is not what I meant. I recalled few builds centred around SoC, overall. And I recalled a build (This one which was using SoC, Ritual circle from gear for dmg, and Inquisitor Seal for the tankiness. I assume that the reasoning was to tank what is possible and leach back up with SoC. I know seal is not for dmg.
I like that sketch you mentioned. Thanks.

I know seal is not for dmg.

Nice one, and it’s a little bit faster then my bi-elemental setup

More fragile, though; it probably wouldn’t do as well in deep SR, it’s pretty easy to get bursted in Crucible already. (Have they buffed Rashalga? She’s scarier on her own than most nemesis pairs for these builds.) A Cataclysm setup with TSS on a higher CD is a bit more kiting-friendly as well.

Also, I see that your build now features Amatok, which counts for a crushing victory on style points, as far I’m concerned. :P

If it’s speed you want, do try Iskandra’s Balance over Eternity. Clearing times can honestly get a bit out of whack with these “whole Trozan” setups if played aggressively enough (and with the right greens to help, I guess).

Hello Pareto, I really like your build and I am currently trying out a druid myself. I was wondering if somehow you can send me your build since grimtool is down and i dont know when it will be up. Thank you!

For itemization, you can use the notes and the character sheet pictured in the OP. (It’s for Warlock, but the main difference is that Druid might want to use the Storm Shepherd belt.)

Devotions, in no particular order:

With the final item setup, the skills will look like this: 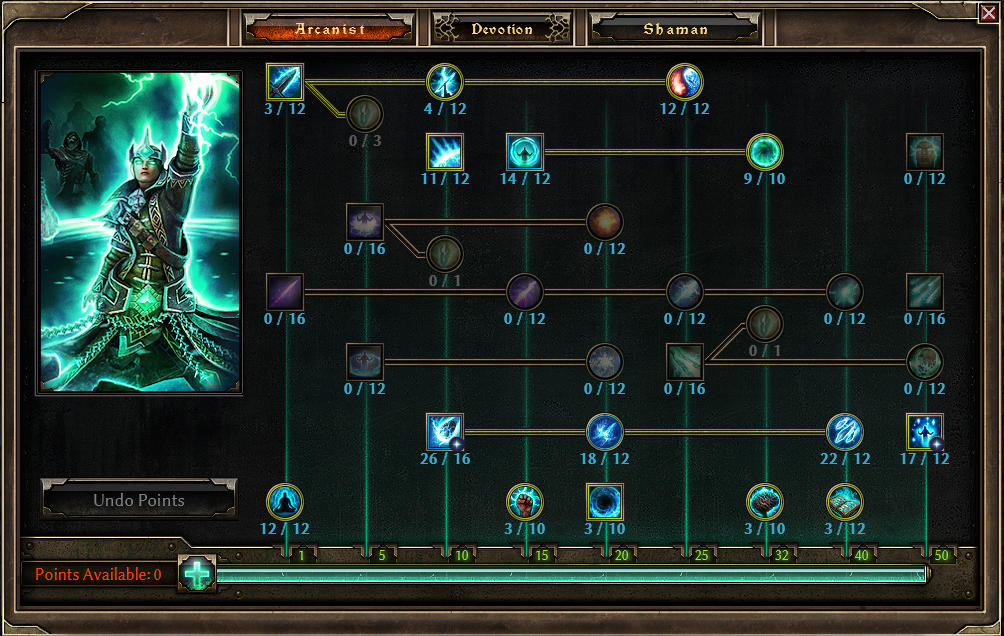 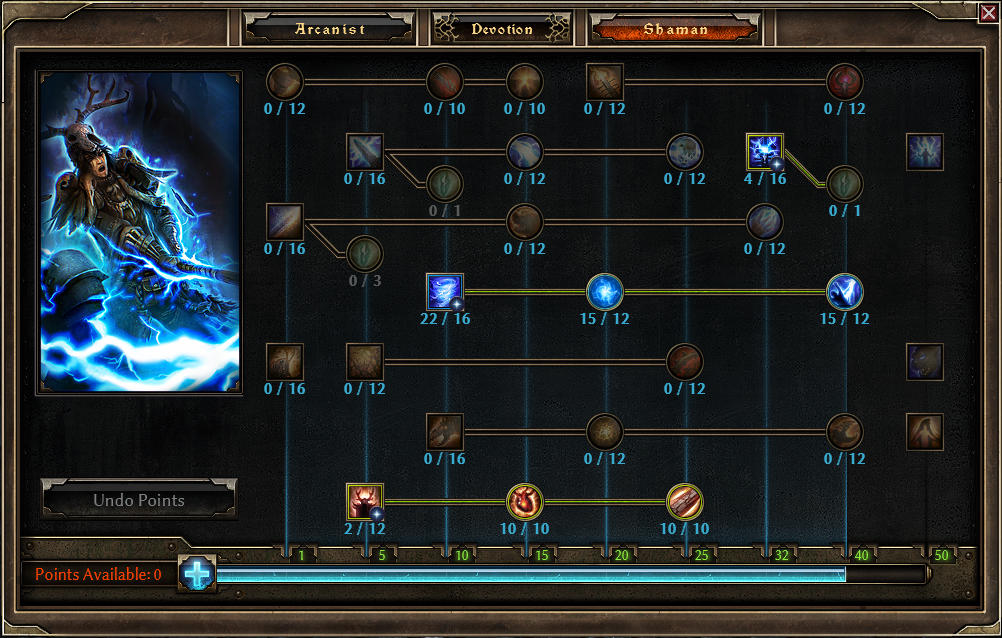 Thank you so much!

Do you mind listing your enchants for your gears? sorry to bother you so much .Appreciate it!

I don’t have the exact list at hand since my in-game char is slightly different, but it’s mostly a matter of looking at resistances and filling in blanks. You mostly need poison, chaos and bleed, along with some pierce depending on crafting bonuses.

I had a lev 50 Druid from 6 months ago, not any ideas for it. I finally found all the items for your build and gave it a try. This might be one of the most fun builds I’ve tried, easy to level , and smashes end game content.

I had this for leveling,
https://www.grimtools.com/db/items/2148

Both worked great. Thanks for the build.