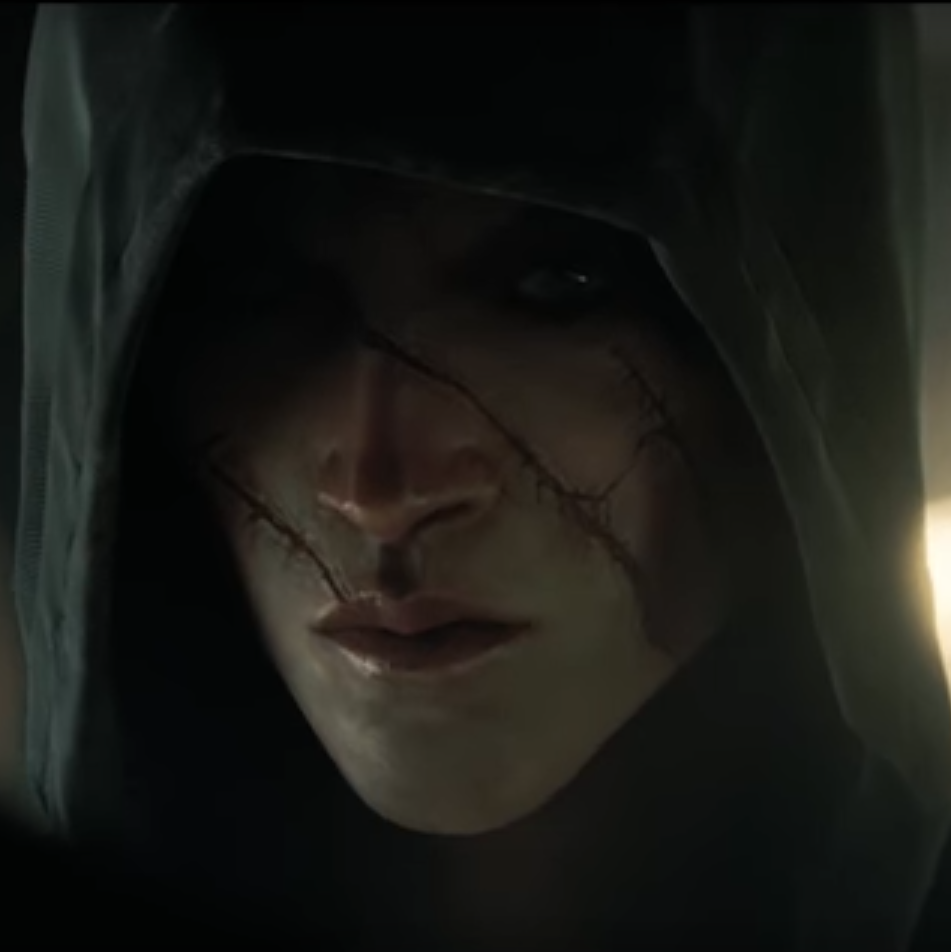 The last clashes with the house of Malakor forced Olexra into another exile. Malakor himself pulled some strings within the newly rebuilt Emperor’s court and now the whole Inquisition was on her tail. Another thing that was bothering Olexra was a strange feeling of deja vu, like she had lived this timeline before but somehow she was returned back in time to relive it all again. To add insult to an injury Malakor’s new allies found a way to destroy Olexra’s new enchanted swords by nullifying their enchantment and thus greatly diminishing their power. Olexra’s luck was running out. She felt a powerful presence getting close to her, or did it all happen to her before. Olexra knew it could be none other than the Shadow Queen herself, Inquisition’s most lethal assassin: Harra.

So the idea here was to create another very strong caster based on an Inquisitor mastery, an all-around setup with no weakness that is able to tackle everything game can throw at it. I decided to try out new Harra’s set on an Infiltrator, so yes, it’s a cold Phantasmal Blades spam build, and it has been done before the Harra set was introduced. This time however it has no weaknesses its predecessors had (that was mainly mana and other QoL problems and some difficult to attend green items).

Reinvented the spec a bit. Still a very strong top-tier build. With Arcanum Dusts in jewellery mana stopped being a problem. Added a video of 6:09 Crucible run.

Decided to rework a build to make up for the damage loss after Harra nerf. Now build has Revenant instead of Elemental Storm.

After nerfs to Harra and Inquisitor caused by this very build new spec has to use Arcanum Frigis pistol to make up for the damage loss. Overall build is slightly less damaging, but still god-tier (6 seconds instead of 5 for Mad Queen and maybe ~10-20s off Crucible timer).

Core of the build is Harra’s set and Mythical Speaker for the Dead off-hand. Designed for Spellbreakers/Sorcerers and even a class know as a Sabouter (only thing being sabotaged is their viabity from patch to patch) it works pretty great on an Infiltrator. I have tested several setups including ones with Nightblade’s relic and a dagger (like Chillwhisper for example) but they all can’t sustain themselves in terms of mana. And in reality the damage and sustain are the best with Iskandra’s relic (try to craft one with high cost reduction roll) is too good. I tried using Grey Magi boots at first, but after tweaking devotions a bit and getting Lantern I decided to get Golemborn, they fit the build perfectly. Craft everything at Angrim for those still juicy armor bonuses (~2130 armor before Golemborn proc and ~2500 armor with it).

Pretty basic cold caster’s setup in terms of devotions. Build is actually not a piano build and plays pretty smoothly. 1-pointer Storm Box as a Rumour proccer is something I have just discovered for myself (used it on my previous builds as Arcane Mines and Bat proccer) and it works wonders. Skill distribution is pretty obvious as well, Ring of Steel has a 85% chance to proc Elemental Storm (so works pretty much always as long as there are two or more enemies) and is taken for its Circle of Slaughter modifier (that gives us very important Fumble).

Positioning is the key with Phantasmal Blades builds - it affects build’s performance a lot both in terms of damage output and survivability. Try to herd as much mobs as possible before you and be sure your blades are not hitting any obstacles. Reposition with teleport or just by using regular movement. Don’t repop Storm Box unless necessary.

Look for the leveling guides on these forum. Don’t forget that this is an end-game build and can’t be replicated without core gear.

Pneumatic Burst and Word of Renewal up (no Deadly Aim) 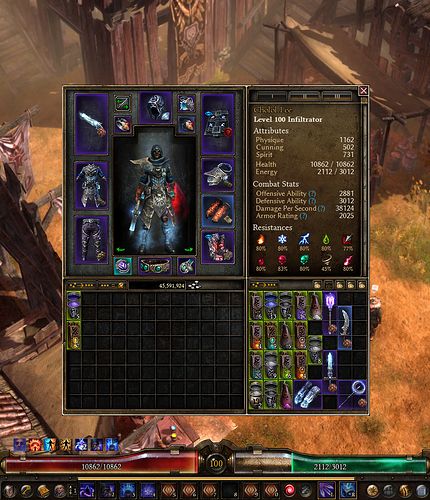 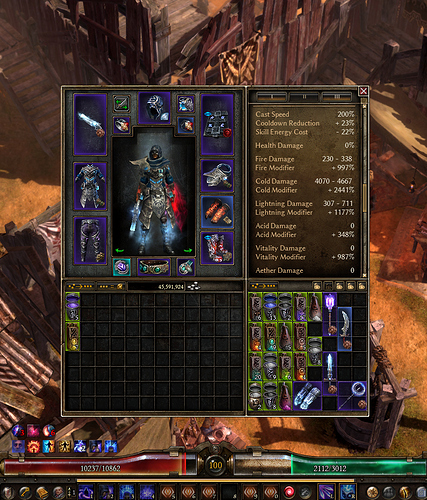 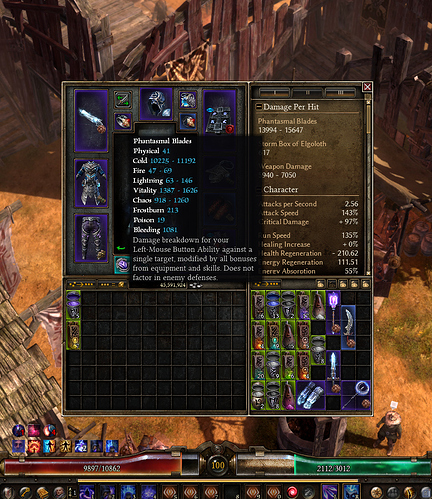 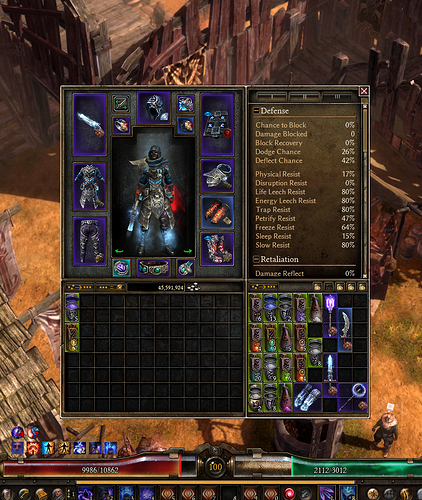 “They have destroyed my weapons and my magic”. Olexra was trying to catch a breath but she felt blood gulping in her throat. “They will destroy your magic too, you don’t understand! This… This happened before…”. Harra didn’t reply. She couldn’t believe that the bleeding small woman standing on her knees before her, defeated, was a famous and once feared rogue mage Olexra. In a way Harra felt a connection to Olexra’s magic and the whole thing felt eerily familiar. At the same time she remembered what kind of job Inquisition expects her to do (or did she do it all before?). “They will take away your power just as they took away mine…” Olexra couldn’t finish. She suddenly felt a cold blade piercing her throat (“Did I fail again?”), preventing her from breathing. Everything went dark.

Special thanks to users BlackSoul and Nirlak for providing me with a saved guide after a forum rollback on 01/05/2019.

Olexra’s head didn’t hurt that much since the last time an Aetherial Archmage Aleksander tried to corrupt it with their weird alien magic. She was alive, but she wasn’t feeling exactly herself. Something queer was happening. Olexra woke up in a very familiar chamber in Emperor’s Palace, like the one she had when she served the last Cairn’s Emperor decades ago. But how could that be possible, new Emperor wanted her dead, and her last memory was a clash with vicious Harra, Inquisition’s best assassin. But Harra’s suit of armor was hanging on a stand not far from the bad. And it looked like it was sized after Olexra’s body.

PB is just a better spam spell with all the lifesteal and shotguns.

And answering your question, nope, PB has more damage and amazing in-built leech. It damage scales greatly versus single targets in point-blank range, Callidor’s Tempest got none of that. (so basically what x1x2 said there)

Honestly, I already said it somewhere: CT nerfs after all the holy crusade against Spellbinders took too much out of the skill. And it was never the main offender in Binders spec anyway.

Thanks for all the kick ass builds over the years Lee

In general, how does Harra compare to Demonslayer? What’s the current ranking of PB builds?

Thanks for all the kick ass builds over the years Lee

Thanks for those kind words, GUNDAMNIT. Be sure to write your feedback once you try it (with all the items tho)

In general, how does Harra compare to Demonslayer? What’s the current ranking of PB builds?

edit: I’m having energy problems, what can I do to solve this? Not maxing PB? / Go viper for the energy leech?

edit: I’m having energy problems, what can I do to solve this? Not maxing PB? / Go viper for the energy leech?

You don’t level with Phantasmal Blades, dude. Ever. This is the endgame build, it’s viable with that exact gear. For leveling Infiltrator check out beginners and leveling guides on this forum. Doesn’t matter what you level with, build starts as soon as you equip all the gear at level 94 (or probably later since you will still be missing ~10 skill points)

Should I stick with the infiltrator gear, or would the spellbreaker gear be better in an infiltrator?

Should I stick with the infiltrator gear, or would the spellbreaker gear be better in an infiltrator?

For the endgame build (i.e. after level 94), in order to play this you have to use the exact gear/skills/devotions that I have outlined in this guide, otherwise you won’t be playing a build that I designed and tested, you will be playing something else and I can’t guarantee the quality of that “something else”.

So for Infiltrator you have to use full Harra’s set which is technically a Spellbreaker set as well as other items in the grimtools that I provided.

So after all the Inquisitor nerfs and Harra nerfs that were caused by this very build I had to respec into that Arcanum Frigus pistol. Overall, build lost a bit of its damage but still god-tier. Uploaded new GT and new videos of my 6:30 Crucible run and 6s MQ kill.

Still not bad but what the frig! There are builds that deserve nerfs way more than this.

Still not bad but what the frig! There are builds that deserve nerfs way more than this.

“Not bad”, lol. Still sub-6 minute build that can do pretty much anything. Not bad, yeah, not a “BEST TOP STARTER BUILD”, but still okay!

I have tested few sorc specs before harra nerf/buff and it was pretty atrocious. I don’t want to come back to that ever again. Nice joke about sabo.

Not bad as in 6:30. I meant I thought nerfs were harder. Glad they weren’t. I still think that PB should be stronger, though.

Not a big fan of untransmuted cold Stun Jacks, I see?

Not bad as in 6:30. I meant I thought nerfs were harder. Glad they weren’t. I still think that PB should be stronger, though.

Not a big fan of untransmuted cold Stun Jacks, I see? 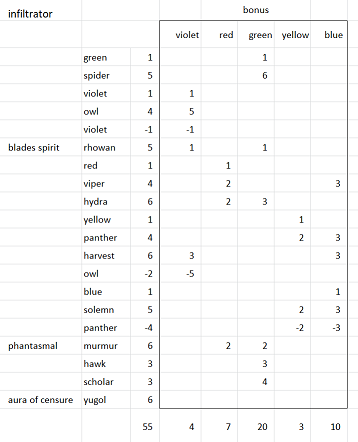 Would devotion setup with yugol but without amatok and ultos be more efficient? Or am I going in the wrong direction?

(I haven’t got any harra’s piece yet, so I cannot test it myself)

Would devotion setup with yugol but without amatok and ultos be more efficient? Or am I going in the wrong direction?

(I haven’t got any harra’s piece yet, so I cannot test it myself)

First of all, can’t quite understand what’s your table is showing

Secondly, Yugol would be inferior here in every aspect here. Flat damage is useless, ADCTH is useless, Acid bonuses are useless and devotion route yields much worse stats then one that I have chosen. Yugol is a melee constellations, casters don’t benefit from it at all.

But you can always test it and compare it yourself.

Thanks for clarifying the pros and cons of amatok.

I was just (wishfully) thinking that yugol’s much faster recharge would make up for its proc being on hit instead of on attack.