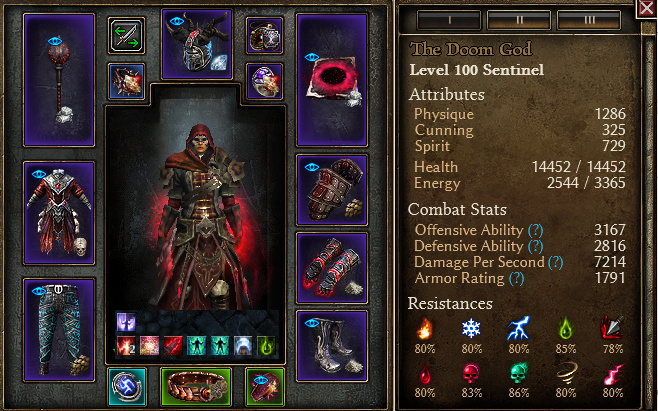 This is by far the HARDEST spec I’ve ever piloted

That being said…once I mastered the spec, it began raining blood.

16 Likes
Fun Sets to Build Around
Build Compendium X (Forgotten Gods)
Any good Vitality Casters other than PB and RE?
sephelutis October 19, 2019, 10:21pm #2

Congratz on making this work. Gameplay wise it looks a lot like a chaos TSS build with the targeting and burst.

Sadly i guess posession wont work with this build? With that and sigil you can usually pilot while snooze.

Edit: i honestly think Doombolt could use an energy reduction buff, that consumption on it is insane for a proper build like this, which shouldnt be when TSS builds never suffer from energy issues.

TL; DR: Possession might work better in shattered realm where face tanking 1 enemy at a time is the modus operandi, but it certainly doesn’t for naked crucible where its wave after wave of enemies.

I did try possession in my first iteration of the naked crucible build, but found it to be incredibly dangerous simply because the defence gained isn’t worth the DPS loss.

Using possession renders the disrupt res on the pants useless, and I can’t think of better alternative for pants which doesn’t rely on greens.

good but to many activ skill :’( like u said piano build xD

It’s not too bad once you get used to it, because pox and plague of corruption is literally just cast once a wave.

Sigil, and DB are the 2 things you are predominantly spamming

I actually do have a sentinel so will keep an eye on this and probably start gather some gears to try this out.

How necessary are the greens? I guess as long as you get the base item the other stuff are just cherry on top?

Nvm ignore my second question - your path is needed for Rattosh…

Also you can give middle finger to fumble which is GREAT!

Belt is needed for the conversion. It’s literally the only way to make DB pure vitality. Affixes don’t matter.

You can read more about the affixes under “alternative itemization”

2 items I have yet to include are:

I still like rylok crest the best because you can get quite a bit of flexibility with affixes.

honestly, the only thing you need on the rylok crest is pierce resists, and there are PLENTY of affixes which give it:

The “of hungering rifts” actually gimps the build as I explained above, but I was to lazy to GDstash a new one, and I also wanted to see how the build would perform without BiS gear.

i honestly think Doombolt could use an energy reduction buff, that consumption on it is insane for a proper build like this, which shouldnt be when TSS builds never suffer from energy issues.

Just read this…yeah. Honestly, most spells in the occultist mastery could use with energy reduction. Everything on it is literally unsustainable:

-1. No crest of winter fortitude.

If the energy consumption gets rebalanced, i think this build would be a really nice alternative to TSS. And it has its own niche too, you live via leeching rather than CDR mirror, and you do just as good single target if not more. You also become more mobile.

I’d say this combo is even worth getting another set support for.

lul. No set can compete with this to quote plaguemirth garbage burrito.

Honestly, the 2 items literally holding the build together is clairvoyant’s scepter (energy proc on it is build enabling), and lunal’valgoth belt.

But this is what I think needs to be addressed first, before discussing DB spam:

[image] The following is a copy/pasta from a PM I sent @adoomgod: In my testing, I’ve come to realize that of every single build I’ve ever piloted in buffed/bannered crucible, doom bolt benefits the most from crucible banners/buffs because of its direct strike mechanic. i.e. the DPS boost you gain from buffs/banners is doubled upon landing a direct strike. And when you factor in the OA/crit boost, it becomes that much more potent. I’ve recently made a vitality DB spammer capable of clearing …

Because, at the end of the day, DB spam is a very niche build, whereas TSS spam is a lot more accessible.

Set wise the devs just need to go for the Trojan philosophy and make sigil a compliment to Doombolt, with full set having a powerful proc or alter the skill for main damage. I can imagine each set providing minor CDR or weapon damage to Doombolt, with head providing CDR and -10% rr to Sigil. Then full set provide a third strike at 75% damage with previous two strikes now spreading to the area. But at same time the CD is not as short as your build.

I’m not sure if you read my other feedback post on the DB sets, but it does seem that the devs are intentionally trying to prevent a set aimed at supporting DB spam because it’ll probably end up being too strong.

E.g. if my spec could benefit from below average set bonuses like…:

It would be hitting the sub-6 timing.

Currently, the set which come closest to what you’re suggesting is aether DB via clairvoyant’s.

You also can’t use starpact or PoT3 for CDR due to absent aether support.

Last but not least, reap spirit mod on clairvoyant’s is trash.

well this is why you make a set that goes around this build so it wont overlap and become OP. Frankly i dont see doombolt will become OP since this build is already a miracle of work and relies on high piloting skill to do dps. Similar builds likely end up less damage but more consistent or just worse overall.

Trozan is managing fine, theres the offhand that allows you to cast more meteor but iskander offers ele RR so the choice is there. hence, i think alot of potential here. Theres this trade off of harder hitting doombolt vs rapid hitting doombolt after all. And theres full conversion vs more base damage.

Come to think of it, the harbringer set for doombolt is great, now we just need the caster variant.

It’s my one of my favorite skills in the game.

I’m flattered and of course, approve.

Again, beautiful build spanks! But I assume you craft all equipment for slow res?

BTW, I am sure you have tested it but I want to know your reasoning.
Doom bolt can be bound to LMB, why didn’t you do it? I think it will increase your chances on directly hitting the enemies.

Also, can’t help to think that points to overcap solael’s witchfire will be better on CoF instead to increase its radius and duration. Will increase the build QoL a lot and reduce the piano.

I actually had it bound to LMB initially, but it can be quite difficult to very precisely manage vire’s might + fallen king movement skills, so minor correction with walking is needed.

This is especially important in nem waves with aleksander, because you need to get directly below the arc.

Having DB bound to LMB sometimes causes you to misfire it when things get in the way, and I’m just not used to using the forced move button, because I only found out about it relatively late, when all my piloting habits had already been formed.

But if you can manage forced movement well, then it does make more sense to bind DB to LMB

Also, can’t help to think that points to overcap solael’s witchfire will be better on CoF instead to increase its radius and duration. Will increase the build QoL a lot and reduce the piano.

I tried that actually. But I could literally feel the drop in DB’s damage:

Because of its direct strike mechanic, Doom Bolt is able to utilize %damage twice as efficiently as all other spells.

So, 5 points away from solael’s is basically -100% vit damage to DB

It’s required grandé piloting skills to achieve your results. And I haven’t got idea how you manage to complete these builds naked. Oh and WTF is Doom Bolt build being good?

Different piloting habits I guess. I’m constantly moving from one spot to another in naked crucible.

You want to gather all the enemies in the middle, while circling around them so only the ones closest to you can attack you.

And when those guys are starting their attack animation, you want to move away to avoid taking damage.

So this means naked cruci is all about hugging the outer rim of the crucible.

buffed bannered cruci is the opposite - you want to bring all enemies to you right in the middle to kill them asap. So knowing how to aggro everything at once is important.

Yeah. I was surprised too. Didn’t expect it to perform this well