Like pretending you have a passthrough gun? Don’t think pure physical damage has to suck? Don’t think ranged cadence has to suck? Are okay with not top tier crucible times until a better AoE heavy devo setup is confirmed? Enjoy pushing minimal buttons? Too many questions? Let’s go! 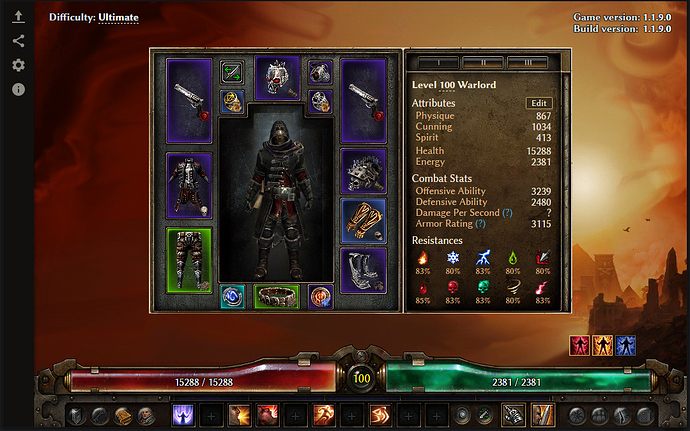 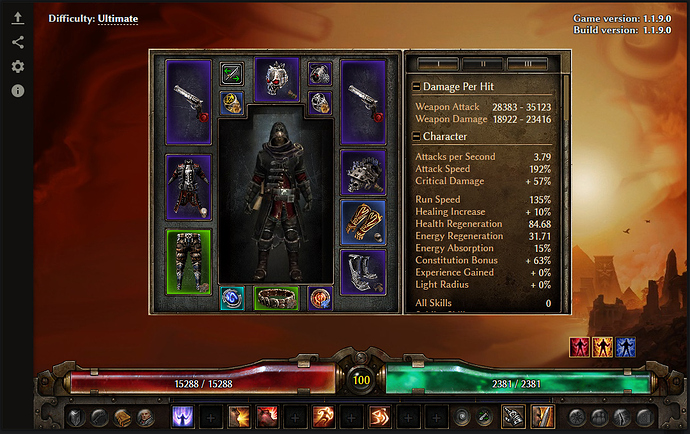 Cadence has passthrough. Smite has passthrough. Exterminate now has fulltime passthrough in 1.1.9.0. So we pretend to be dagallon, while smite and exterminate (and I suppose markovian’s advantage) cover up the normal pea shooter vanilla shots. Still trying out 1.1.9.0 ranged buffs but this is the best ranged cadence has every felt to me. First versions of this setup went heavy on vitality conversion using sacrifice, dread armor, etc. Sheet damage was lower, resists were worse, and hp was about 4k lower, all leading to a much more fragile existence despite extra ADCtH+Scales. Going all in on pure physical damage, hard capping deadly momentum, and grabbing Oleron to help with AoE on the bros brought more damage and better resists and hp. Two greens with ideal rolls obviously, but there is flexibility as you’re mainly fishing for defensive needs. Devo map may still see some adjustments as I figure out how much bear is helping damage+survival, and I try to get more PBAoE to speed up crucible.

Pants: Kuba Chausses hard cap deadly momentum. Soulwarding is ideal as aether and chaos resists are tight and it solves one of those with damage % as well.

Relic: Doom. Not an amazing fit here, but the stats are all helpful and the +1 hardcaps important skills. I don’t even bother with the active skill. Oleron’s Wrath is also fine, and Juggernaut is probably a cheap and sneaky option that I want to try for even more survivability that won’t cost too much damage (and +6%OA!). I didn’t try Deathstalker because I couldn’t hard cap DM then without cheesing a green ring, and we have a decent amount of physical RR already.

Edit: Relic Breakout!
We need +1 soldier to hardcap Deadly Momentum, so I’m ignoring other options for now. Assuming capped attack speed (feasible with good roles without AS on Doom) and all average rolls.

You get about a ~2% total damage bump (per tqFan) due to the 5% OA roll on Juggernaut vs Doom. About 1% over Oleron. With high OA rolls this gap will increase due to PTH scaling.

I am hard pressed to not recommend Juggernaut if you have capped attack speed moving forward. You get a ~1500hp heal every 3 seconds or so and a touch of regen inbetween, while not losing any meaningful damage and potentially increased damage in high roll OA/low mob DA situations

Belt: Ugdenbog Girdle. Very easy to farm, and again we use for defensive stats over the purple soldier belts. Acid conversion is virtually ignored so no need to fish for high roll. Imposing is a pretty nice affix

Medal: Korvaak’s Brand. We need dual wield support, hard caps Smite, and we even convert some of the flat lightning.

Boots: Windshear Greaves. Nice stats, we actually need the DA, and the proc is decent. Craft for physique

Gloves: Turin’s Grips. Stats we want and + skills are more useful for us than Chains.

Rings: Black Matriarch is a default physical ring choice, and we do convert some of the proc. Other ring slot has some options. I went Storm Seal to get AS and DA. Goliath Signet is craftable and also has decent stats+proc.

Gameplay: Create a line of mobs and shoot at the furthest one. Cadence and multiple WPS have passthrough, so most things will crumble. Cast warcry on cooldown, toss down the Herald of Doom banner for bigger packs or nemesis. Vire with dire bear helps with both armor strip and leech. Vire and movement rune also keep you moving from pack to pack. Ascension is 1 pointed cause no great place to put those last points. Dropping or ignoring is not a problem if you want to dump them elsewhere. We don’t have any + oathkeeper so I don’t think it’s worth the points trying to soft cap.

SR75-76 - ~10:00 run, single death due to bad judgment in one of those awful cramped + environmental maps. Good reminder that you’re sturdy but not invulnerable. Also a close call against Fabius, which is the most annoying matchup. Not from his attacks of course, but reflect death when he pops blade barrier. Save potion, run away, etc. This build feels very safe/smooth in SR and is @Monceaux approved

Crucible: @romanN1 came in with a 5:26 run. @Crittrain was testing around 5:50 on his first runs, so I split the difference. Needs more AoE which will require some devo map testing.

One death SR85 run because IM is a meanie

You are making some of the coolest builds dude. I wouldn’t mind testing this one out.

Well this is embarrassing, devo map changes already confirmed thanks to @romanN1 and a 5:09 run!

Great performance for this build, congrats!

I only really notice it against Fabius, but yeah, unfortunately we only have modest physical resistance. Original build had more reduced damage reflection in the devo tree and it didn’t seem to make a difference. I’ll be playing around this weekend to see if I can get it SR90 stable, will take a look at the reflected IT as well

Nice, I tried a couple but just lose interest if I have to really massage kiting with IM or Fabius

i feel that lol