The best I can do is to offer this guide on external site done by @sir_spanksalot, @PlagueMirth @sigatrev and me.

We want community resources to be something players can rely on as always accessible, not spontaneously vanishing because of somebody’s mood.

Since you guys have a pretty thorough resource externally, you are more than welcome to transplant it to the forum.

Since you guys have a pretty thorough resource externally, you are more than welcome to transplant it to the forum.

Thanks, the guide’s idea is by Sir Spanksalot, so he can only added it but he’s not active at the moment.

I think game guide it’s very important for the community and understand your decision.

Damn. I missed the beef? Somebody fill me in; I’ve only heard whispers on reddit.

I guess I gotta start updating the basic sections stat.

Damn. I missed the beef? Somebody fill me in; I’ve only heard whispers on reddit.

I guess I gotta start updating the basic sections stat.

I don’t know what happened. There’s also cache version of the guide.

If you have idea what I can add to the guide, write me

Oh, you’re right. It is suddenly gone. I was looking at it the other day.

Link no work no more

Not all the images transfer.

But the guide could be reconstructed. I think forums usually have it so that you can just repost something someone else posted, even if that person deleted it and doesn’t want it posted for some random reason.

Need to do this for the cached version:

🤓 malawiglenn’s guide on game mechanics for beginners 🧐 I will explain some of the more advanced game mechanics that I often see new(er) players having troubles with or just being asked about in general to a pretty high extent. Also many...

5 posts were merged into an existing topic: New Forum Feedback

In this page of the linked guide, the example math:

Am I misunderstanding something here, or is this an error in the guide?

[edit] @A_S00 Just test it in-game, should take a minute or two, if it matters to you

Now that I think of it I may have actually tested it once myself and it was not multiplicative as it’s stated in the guide but I may also be imagining it.

[edit2] No way, I think the guide is wrong

[edit2] No way, I think the guide is wrong

Imo I had this dispute with Spanks back in the days, he claims you get the % damage boost and then it’'s applied to the % damage on converted skill, my experience is that it doesn’t. Chaos RE works but damage isn’t that high even with perfect conversion from vitality/acid and skill mods.

How this part in the guide should look like though?

I’m pretty sure Spanks is right that % damage bonuses to the pre-conversion type from within the skill line apply to converted damage, but I believe it’s additive with global % damage, not multiplicative. So if you have:

Then the correct formula is:

…which is what the guide currently says.

I’m gonna go double-check this and grab some screenshots.

I unequipped all my gear, then equipped Mythical Blood Orb of Ch’thon and turned on its toggle for 100% Elemental > Chaos conversion. Here’s my damage tooltip with a single point in TSS and no points in Frozen Core: 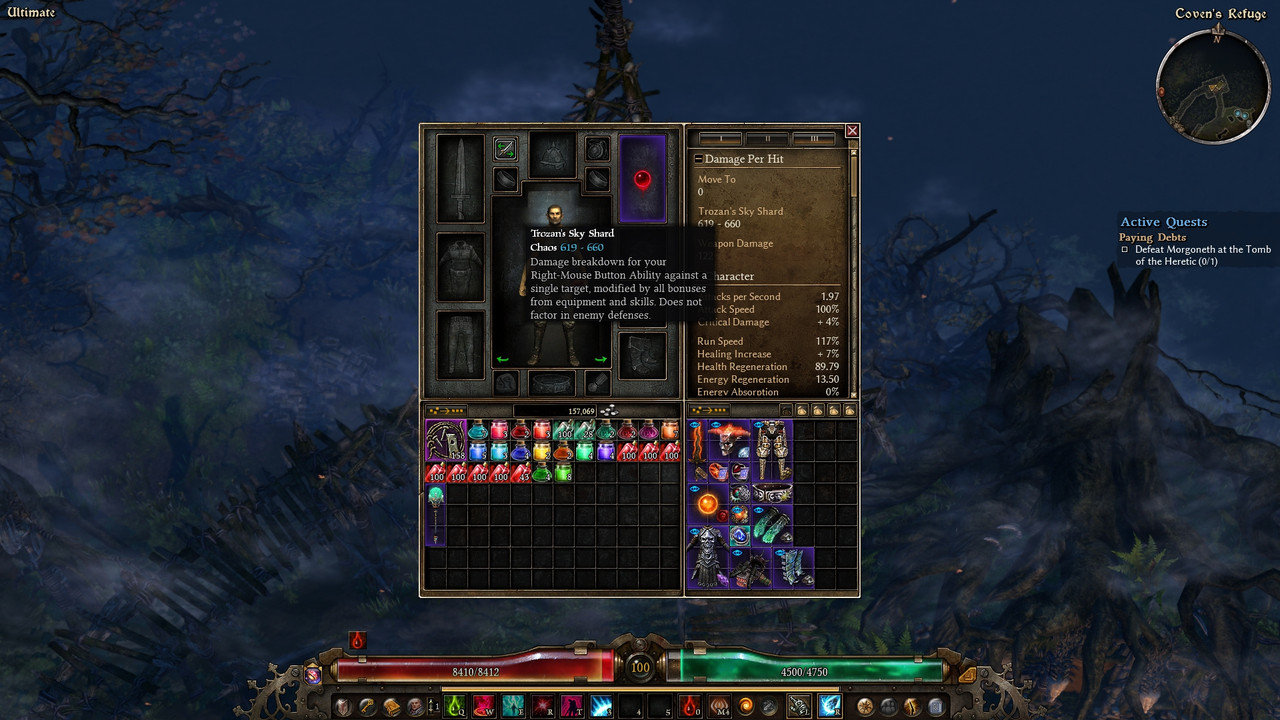 Then I specced 11 points into Frozen Core, enough for +99% Cold damage, within the skill line.

There are three possible outcomes here:

Here’s the tooltip with the points in Frozen Core: 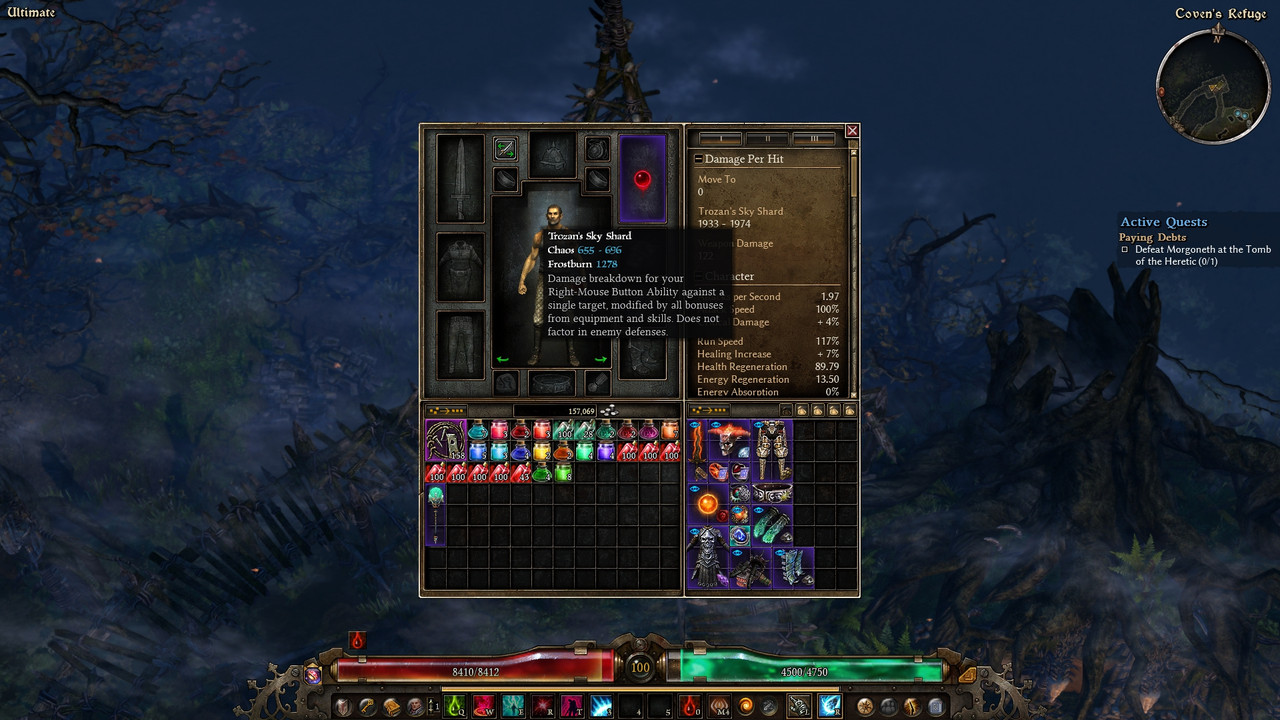 As you can see, it went up, but only by a little, not by double.

Just to double-check, I also did the same thing with Allagast’s Stormbinder, which has 100% skill-specific Cold > Aether conversion for TSS. This isn’t quite as clean a test, because it also adds flat Aether damage, so the +99% from Frozen Core wouldn’t result in precise doubling of the damage even if it did stack multiplicatively. However, we can still use this to double-check that skill-specific conversion works the same way as global conversion.

Here’s the tooltip with Allagast’s equipped and no Frozen Core: 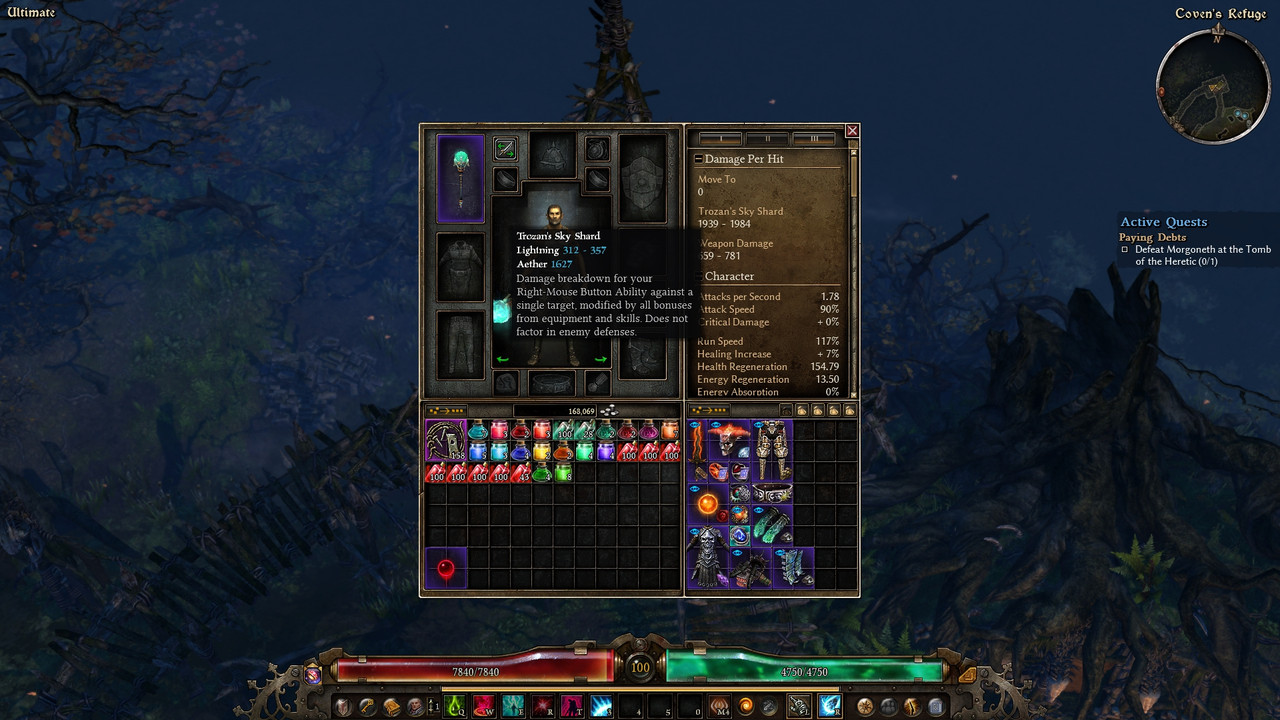 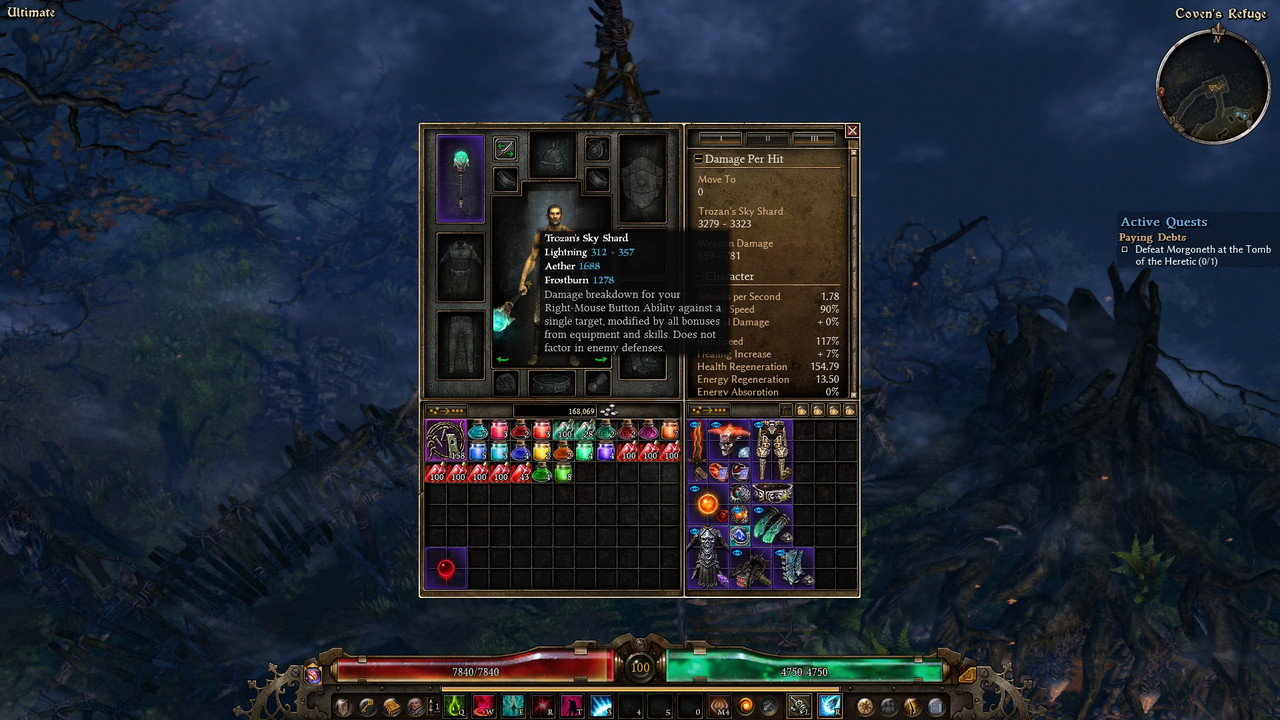 Again, Aether damage goes up, but only by a tiny bit, consistent with additive stacking.

How this part in the guide should look like though?

I suspected it works as @A_S00 was kind to confirm that it does because I did this test myself in the past (thanks for sparing me the re-testing by the way). The problem is that it’s hard to explain simply in the guide using some example because it is a bit counter-intuitive and artificial. But the truth is that’s the only good solution from the balance perspective.

[Although the bonus is a bit too weak when you have thousands of %Damage.
I thought of changing it from %damage to i.e. 0% - 20% Total Damage multiplier]

It is pretty easy to test if this is multiplicative or additive btw
https://www.grimtools.com/calc/lV7mK4ON
If Rending force was multiplicative this build would do x3,2 times damage compared to not having a single point there. But the dps increase is about 15% instead, meaning it is additive.