The reason behind this build is to create 2H melee vitality Cadence because I have not seen it anywhere. Using Death Knight is the best option becasue of support for vitality damage from Necromancer. As a weapon I use Korvan Reaping Halberd with support for Bone Harvest. The core of the build is The Blood Knight set. Cadence generally has weaker AoE so I also use gloves that give Cadence more targets for better AoE. Bone Harvest also helps with AoE. I have not maxed it because of skill points shortage but it still gets +120 % weapon damage to it. Physical to vitality damage conversion is 80 % for Deadly Momentum. Build has % damage reduction, very high lifesteal, high life, Scales, Mark of Torment and Ghoul + Bat. Yet as it is with all vitality melee it is squishier with packs of mobs in high SR despite all of these defenses but it can still do SR 80 consistently if you play carefully. 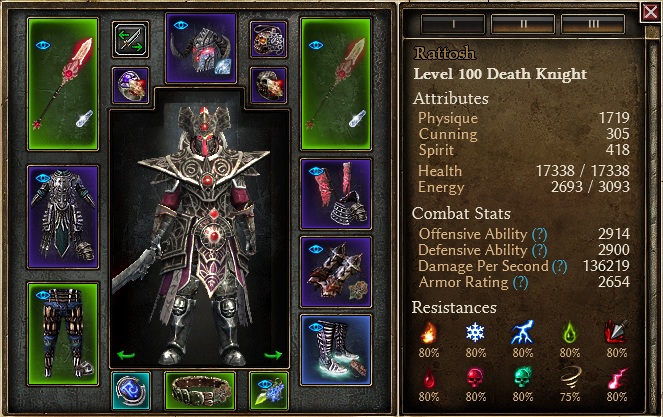 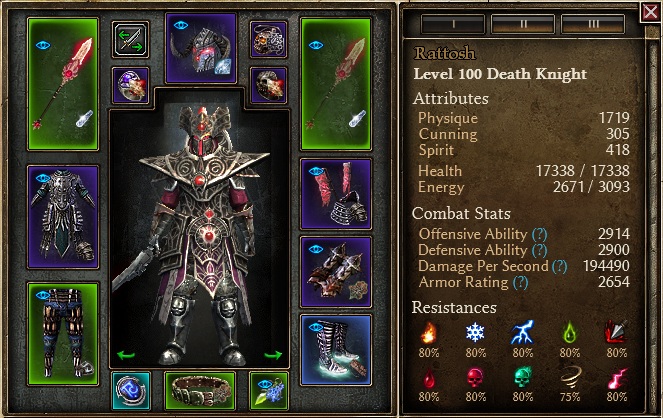 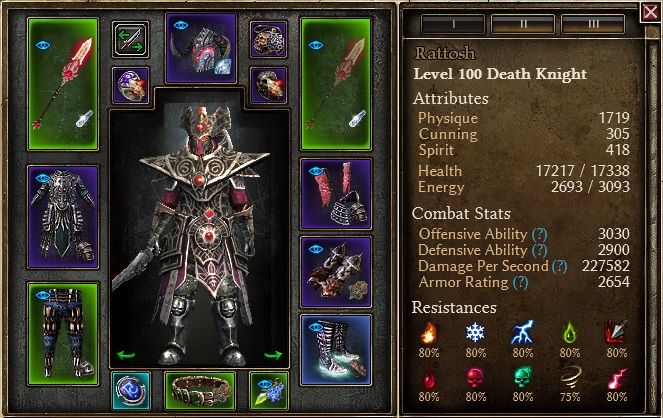 This build can do SR 80. No boss is a problem but killing Kuba is very slow. DoTs can weaken this build but it has great lifesteal. Life goes up and down a lot.

Nice one! Try MA instead of NE, you AoE should be enough with BH and ZT and you can’t convert it’s flat cold damage, animation is slow so atleast Markovian has DA shred which helps you proc signet’s RR.

I am not sure why but isn’t MA bad with 2H builds? Build is fine with bosses and that proc is mostly for bosses. I think AoE is better but I will try it.

I am not sure why but isn’t MA bad with 2H builds?

Well technically all uninvested WPS are bad for 2H cadence builds if you have good AS but I never had any problem with MA, though I always hardcap it because it’s a DA shred without extra button. Maybe as a one pointer it’s bad. And animation is almost same with Reaping Strike. So I believei if you keep it 12/12 with it’s DA shred it boost your proc rate and damage better than NE. Maybe you can test it with just MA and RS without other wps, one provides extra lifesteal with basic attacks and other provides DA shred, use extra points into BH to get more AoE.

Hey man, got an idea with my Reaper, surely will work for your build aswell; use Namadea’s Eye instead of Plagius Mark; total dps gain. The only problem is balancing resistances.

Made some personal adjustments to this- thanks for the nice build idea.

Main change is that I picked up Siphon Souls and experimented with Spectral Warmaul as the weapon, which actually works surprisingly well. The beefed-up SS works wonders for helping to keep you alive in packs. Also swapped out the medal for Namadea’s Eye (credits to @fordprefect for that!). Tweaked the devotion map too, so now there is a fair bit more crit dmg - as well as bat, which I previously lacked a good proc skill to bind to (all my other ones were taken). But now it works pretty nicely on SS.

This is my own character with drops I got in game; one can no doubt farm/stash for even better.

But I have been using this successfully, and it’s a pretty comfortable SR75 farmer.