Next in the line of my Cadence builds is 2H physical Cadence. Typical class for such build is a mastery combo that has two physical RR’s. I have decided to no go this route. Tankiest class combo for 2H melee is Warder. There is an option to play physical Cadence Warder with Voldrak’s Crusher but such a build would be weaker than what I had in mind. Nature’s Avenger set gives bonuses to Warder’s WPS and is supposed to be played with Savagery but I will use it with Cadence instead. The result is just stunning - I think by far the best 2H melee Cadence build. Great AoE of 5-7 enemies every 2 out of 3 hits + Upheaval on crits. Cadence and Zolhan’s Technique deal very high damage and Feral Hunger heals. Cadence deals 484 % WD and ZT deals 305 % WD. Build also has high weapon damage to compensate for less physical RR. Wendigo Totem heals for 2900 HP/s and health regeneration is with Avenger’s set proc 1700 HP/s. Total healing is therefore 4600 HP/s + ADCtH and Scales (non converted). Base physical resistance is only 18 % but Avenger’s proc is always up and with it the build has 40 % physical resistance. The build does SR 80 very easily and can kill Ravager. 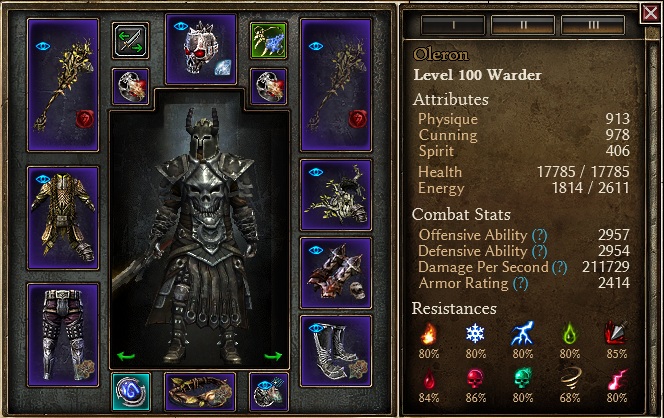 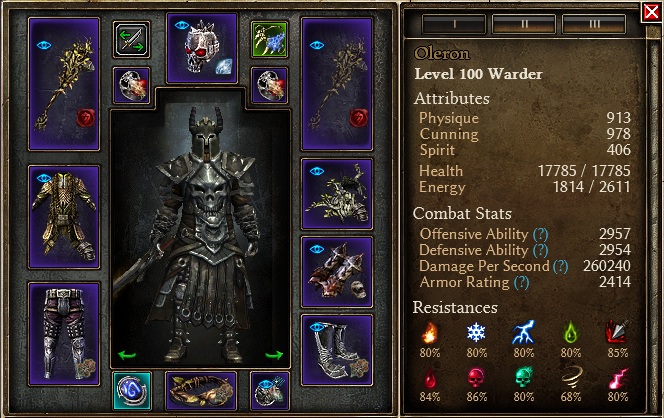 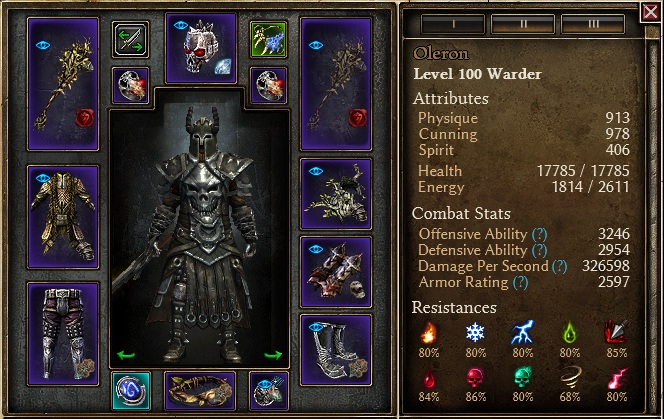 This build does SR 80 very easily. No boss is a problem. It can go a lot higher if you are a skilled player.

I link this to my beginner build

You are seriously missing out on damage by not taking Beast Slayer’s medal and not maxing Brute Force - that flat Lightning damage that gets converted to Physical is unmitigated by armor. The components setup with no Ancient Armor in pants and no Sanctified Bone in chest is also suboptimal for survivability and damage.

Same goes for ring augments - Hammerfall Powder that gives you flat Pierce damage gets its Pierce converted by gloves mod so you get 30 “magical” physical damage that is unmitigated by armor which is huge give Cadence’s humonguous % weapon damage multiplier.

Having wendigo totem at 13/12 is no big extra heal compared to 12/12. One more point in Mogrodens pact will get higher physical damage. Remember, non converted physical damage (compared to the “magic” as madlee mentioned) get indvidual armor checks each source. Thus maxing all places where you get flat physical damage is important.

You also have the points for 20/12 fightning form to get even one more target on cadence and more +%phys damage which will increase these small flat sources of physical damage on cadence skill and all the sources for the wpn dmg meaning even less armor waste.

how is this less tankier than what you posted btw?
https://www.grimtools.com/calc/0V00B11V (my suggestions)

You changed one point. I think these things can everyone do as they please with their own version. I don’t tell other people that they should play exactly my version. It is just a template.

edit - Oh I didn’t notice the Fighting Form. It is possible but I need that OA on Fighting Spirit.

These little changes can just everyone do as they wish. I am not interested in total optimizing. That should be clear by now I hope.

You changed one point.

No, also got fighting form to 20/12 as I proposed. Just some suggestions mate, take it or leave it

After all, isn’t the point of posting builds also to discuss/get feedback and get more ideas?

It is possible but I need that OA on Fighting Spirit.

Survivability is also heaps better with my suggestions. Having higher DPS on a melee build without sacrifices to defense (even with them sometimes) often translates into higher survivability as you can leech better with higher dps and also kill enemies faster before you get debuffed into oblivion

And one more skill. As I said everyone can do these little changes as they like.

Survivability is also heaps better with my suggestions. Having higher DPS on a melee build without sacrifices to defense (even with them sometimes) often translates into higher survivability as you can leech better with higher dps and also kill enemies faster before you get debuffed into oblivion

It can kill Ravager, I think survivability is fine for me. Yes loosing elemental res on augments and medal is better for survival. Dude, you are just full of it as usually. Just stop posting in my threads.

Yes loosing elemental res on augments and medal is better for survival. Dude, you are just full of it as usually. Just stop posting in my threads.

Surely you can find plug Elemental resist to make a build better overall?

Good enough for me.

Aren’t the Wps counter intuitive with the way Cadence and Upheaval work? Pretty sure Cadence can’t proc Wps and Upheaval only works if your basic attack crits and that excludes Wps/Cadence.

Pretty sure Cadence can’t proc Wps and Upheaval only works if your basic attack crits and that excludes Wps/Cadence.

You are correct, but he only spent one point in upheaval so. And from my experience playing almost the same build - it is not worth dropping Zolahn and/or feral hunger just to proc upheaval more often.

Do you have a grimtools link? Levelling with a primal strike warder since I never tried that skill before. Very flashy and fun. Would like something to respec into at level 94. Do you feel physical 2H warder is the best warder?

Do you have a grimtools link?

Hello Mad Lee. Can I ask you something.

Since converted physical damage is not mitigated by armor , does the game actually increases / decreases the DPS accordingly between what is mitigated and what is not when i attack an enemy?

Let’s say , I am using Cadence and I have additional 30% Elemental Damage converted to Physical Damage from Brute Force. If I hit an enemy for 10K Damage, will the game separate 7K damage to be mitigated by armor and 3K not mitigated by armor?

No it doesn’t calculate armor mitigation, also don’t expect mad_lee to ever answer again since he is perma banned.

The dps tooltip in game does not know about what the armor of the monster is so it can not account for that. Neither does it know about resistances and crit damage etc