Emperor’s heir was in the middle of his dance lesson or so he liked to call it. Elessar was so young he could barely grow a man’s beard yet he was the most talented fencer this court or any court in the history of Arkovia has ever seen. He has won every fencing tournament in the last two years and was mostly reknown for defeating the infamous imperial assassin Murcielago de Fuego and his fiery blades in one of the finals. Right now he was sparring his current teacher - another famous imperial assassin and a prominent member of Luminari Inquisiton (“There are too many assassins in this court” that was Elessar’s favourite icebreaker joke he told ladies at the numerous balls and other social events that involved Royalty). Elessar was wielding his favourite weapon - a two-handed long sword, a massive and heavy blade and yet it looked so light and nimble in his hands.

Suddenly a creaking old voice interrupted their sparring. “You can’t be mono-damaging”. Inquisitor Malakor was known to have just “half of his mind” left after the last clashes with the fierce followers of Witch Gods. Although Inquisitor’s ill-wishers whispered that it happened because he once swinged his Malakor hammer too hard trying to destroy an ancient magical artifact - Storm Box of archmage Elgoloth - and hammer bounced back and hit him right in the head. Some evil tongues in the court even thought of a “funny” name for that tragic accident of self-harm and severe head trauma - Malakor’s Infusion. “You can’t be mono-damaging, your Highness”, Malakor repeated. Young Elessar stopped the sparring and looked at old Malakor: “What are you saying, uncle Malakor? Have you had your herbs today?”

This build is based on @Firozo’s somewhat iconic Pierce Blade Arc’s Blademaster. Credit for the idea to try and utilize Bleeding damage on a Nadaan’s build goes to @banana_peel and his amazing Tactician.

With the new green meta this build got a great boost in a form of Balthazar’s medal. Even better results across the board.

*Craft only for Slow Resistance

Shouldn’t Uknown Soldier be better than Azrakaa’s? It has both Pierce and Bleeding!
Tested it and due to OA losses on the way to the Uknown Soldier damage is actually slightly worse despite higher Bleeding damage
What about Reforged Chains Oleron? They have Pierce and Bleeding damage and let us hard cap Ring of Steel!
Yep, tested and they are worse. I am guessing OA scales too good on this build
If you like OA so much why didn’t you invest in Lethal Assault? You convert most of its flat into Pierce!
Well, apparently not! Version with fully leveled Blade Spirits and more streamlined melee gameplay turned out to be faster in the end

Every piece of gear is pretty much bis here. Devotions are perfectly balanced in terms of offense and defense. Put everything into Cunning. Medal is farmable, you need some %pierce damage on it, preferably “Cutthroat’s” affix.

For leveling check dedicated guides on this forum. This is an endgame build and it works as advertised only when you equip all the gear/skills/devotions exactly like this at level 100.

Everything is facetankable in Crucible Gladiator 150-170 when you play it with buffs/banners. Try to learn how to play it by watching Crucible videos below…
In Shattered Realm stick to fast 65-66 farms if you want smooth deathless runs. You can also farm 75-76 with this build but do expect to die sometimes and be prepared to use camera abuse if Slathzar spawns. 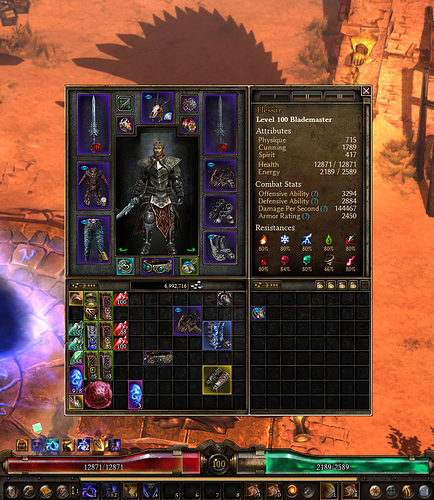 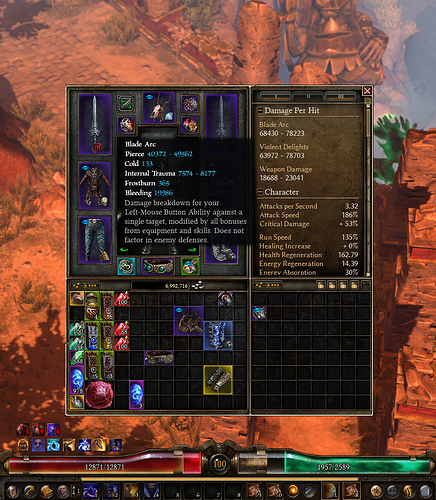 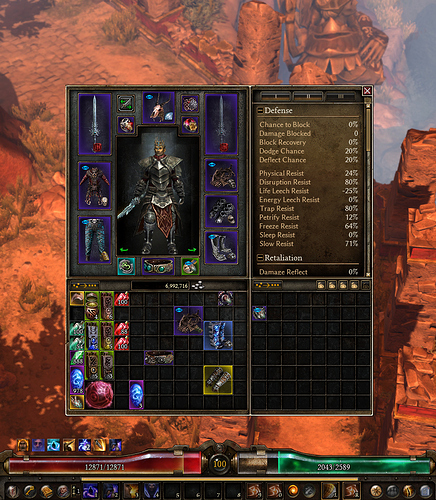 “What are you saying, uncle?” Elessar gave his sword to his squire and wiped the sweat of his face with a piece of cloth towel he got in exchange. “Mono-damaging? You shouldn’t ignore court healer’s prescription, you know that!”. Old Malakor suddenly forgot where he was: his mind was fading out of the reality (as it usually happened with him these days) taking him back to the days of his youth where he was just a young Inquisitor hunting the followers of the criminal warlord Cronley himself. Back then in the simpler times he could combine seemingly any element with any element in the art of war and fetch himself a good bounty bringing one of the Cronley’s scumbags to justice.

Inquisitor woke up sitting at his moldy desk in his small cabinet. Before him were his unfinished memoirs of the resonating events that took place in the year 1160. Old Malakor farted.

Oh and cool build too! I love the hybrid style of pierce and bleeding and Nadaan Arc is proven to be strong concept.

Still I have to congratulate you for this great result!

Finally someone who uses wendigo rush as a rune.

Actually, in final versions someone reminded me there is a Rune of Violent Delights, which is all around better for this build. So fixed grimtools.

Suddenly a creaking old voice interrupted their sparring. “You can’t be mono-damaging”

If you giggled after reading this, it means you played Grim Dawn too much.
Thanks for the build and the read.

You have 50 Bleeding RR and Nemesis (except Kaisan) have 48 % Bleeding Resistance. So it´s enough.

All nemesis have 18% Bleeding resistance(Kaisan — 63%)

This is a very fast run, added to the op.

How bleeding has fallen, huh, fastest Bleeding build is wearing Bloodrager but actually just pretending to be a Bleeding build and doesn’t include Shaman )))

I prefer Shoot’s Warder to safely farm SR 75/76 half asleep.

Shoot’s Warder? What build do you mean?

That’s a sick timer, mate, will add this to the op! Thanks for the vid!

Thanks for a very good build🤗

Still a sick run. I wonder if there is a faster two-hander currently. Many thanks, added to the op.

. I wonder if there is a faster two-hander currently

You know one particular