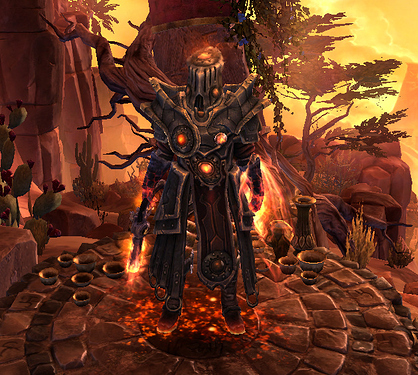 Hi and welcome to first build post of mine. I have read around a bit and I learned that you wanna see what has already been posted and also post at least pictures of some build performance. Let me know if this is good build post when it comes to structure and presentation. Also English is not my best language but perhaps you guys and girls understand.

On this build I wanted to re-explore old ”classical” mortar build which focuses on health regen and very high DA (this was before the DA chance to hit-cap was introduced in game). Note that I do not take the high DA concept for this build, only mortars and health regen.

Name of character suggest that he rises like the bird phoenix from the ashes. The phoenix devotion is sadly not included in the build

Some Mortar purifiers has been posted before, but all of them seemed pretty glass cannon and had no notable health regeneration. Still reader of this build could consider them too see further down for links. Let me know if I have missed give credit to someone.

I play self found gear, and all alone. I only use GD stash for saving items and searching for them. I level up my chars using speed level technique similar to Rektbyprotoss. My build-style is to try and make non-standard builds often centered around a concept or fun item that I find and not sets and such. Sometimes build won’t work but sometimes you get nice surprises which I like.

More focus on Big One and additional summon of mortar. Damage increase but not sure if because of Big one or just one extra mortar.

Version with Kalastor rune instead of many points in big one, https://www.grimtools.com/calc/nZoQO6B2 but one more button to press. Good damage!

As you can see around 3000 health regen per second at base. 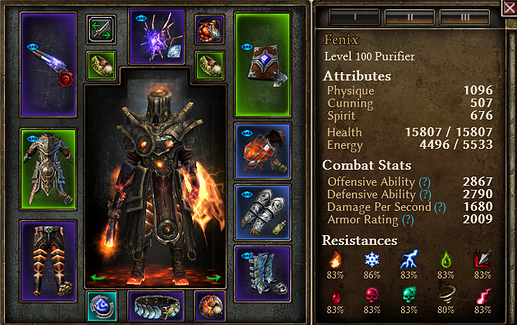 Depending on what affixes you get one rings, off-hand and chest, you can make both better and worse version of build

Everything is easy to get except Gollus rings because he is long road to kill and not high drop chance. I have around 40 of his rings and those was best I had for this build.

Build just tanks most of the stuff in main game like Morgoneth, Mad Queen, Kravall, Lokarr and all the skeleton key dungeon bosses.

Mogdrogen - for him I did change some augments and stuff to get higher DA, fight took about 7-8 min.

Ravager - I was needed to kite here and there but after some time he dropped dead.

Calla - not tried yet, will probably need 20 minutes of kiting like headless chicken and same with crate boss…

Shattered Realm (SR) – can do at least 80 but you need some luck with nemesis spawns at these high shards. I have died a few times but most of time I success. Farming SR 65-66 is not super quick but is very comfortable and it gets the job done if you wanna get some new fun items.

Crucible it performs very poor due to pretty low damage. 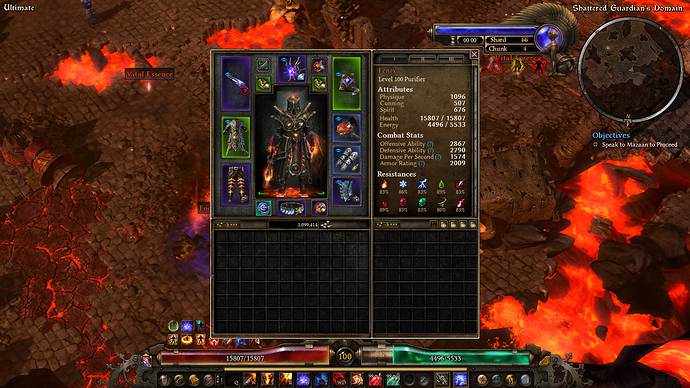 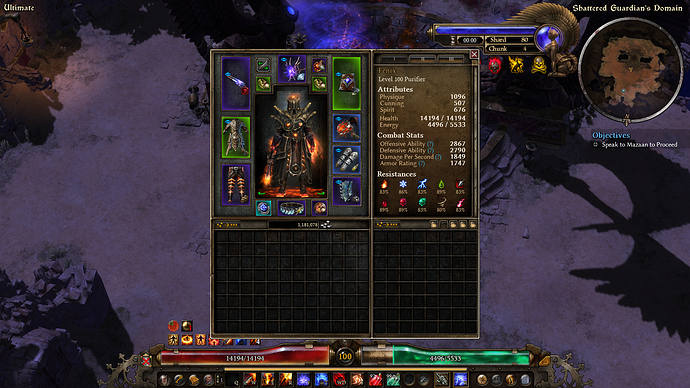 image.jpg1536×864 641 KB
In this room I had Aleksander and Benjarr. Also ishtak and perhaps one more guy. Just pick them off one by one.

For performance of the other versions, see in this thread down below.

Playstyle:
Most of time just stand on seal and cast stuff. Sometime you need to kite some and use medal augment skill to avoid large hits like Aleksander meteor.

Leveling
I leveled this char “speed level” style using tokens, Lokarrs set and experience potions. I played with word of pain & included blackwater cocktail for most of the time until I got to level 94 in about 8 hours or so. I still try to improve this method and my execution of it but it is not main focus for my playing

Do you think something similar could work with sorcerer? Is the “big one” node still not worth it even after the buffs?

Do you think something similar could work with sorcerer? Is the “big one” node still not worth it even after the buffs?

Very much so https://www.grimtools.com/calc/DV9mwEPV (to the sorc part at least, and this is an old gt so definitely would be worth taking some of the demo DR% stuff
)

Really like the blues and cheap components wich work so good in this one. This build is easy self-found playable. Good for beginners overall

Very cool overal. The health regen when so big is definitely underestimated by many. And i think with the kind of decent health pool you managed to create and ok phys res and armor that you have a good combination here. Well done.

Thanks people for feedback

@Nola yes it is possible to create char from start. Terrnox offhand easy to farm, but gollus rings have low chance to drop and also long distance to boss

@Pirao it might work yes, see Valinov grim tools. I have other plan for sorc, I now try to create one build per class combo (i have had some sorc before but from patch 1.1.7 I restarted with new stashes and characters just since game got so big change). Also thank you for Mortar trap big one advice, I did not remember buff. I changed build some and damage vent up a bit. Will post this alternation Grim Tool link later

@vizix Perhaps you can deal more damage not sacrifice gear and skills to health regen. But with mortars key is to be able to stand still so they hit monster. Before I did elementalist mortar with almost 25k health and it was also quite durable. I like purifier better still.

Maybe I will go visit gollus in his cave 100 times more and get some better rings with higher OA… I already feel traumatized but the grind must go on!

New version with 5 mortar summon limit and Big One 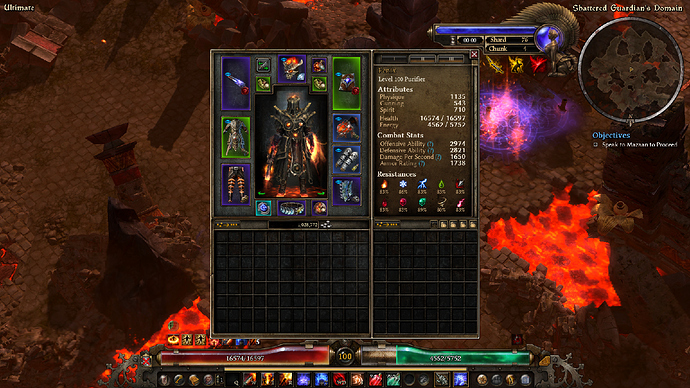 Hey, if you focus on survivality I would change pants for Mythical Legwraps of the Tranquil Mind for slow resistance. In SR for kiting builds CC resistances are very important.

Yes but I have not needed to kite so far…

Reaper is very dangerous without slow resistances, you are basically rooted from his slow. I don’t know if you can facetank him all the time but if pulled with other bosses or met in 1-3 shards it’s better to have slow res.

idea was to see how far I could take build with principle “stand and heal while letting mortar rain on monster”. My experience from kiting 2nd phase of ravager was not fun. For kiting build I prefer damage over times instead and we deal not so high burn damage here

small update:
build version with 6 mortars
https://www.grimtools.com/calc/pZrmDa6V
needed to craft more boots because all my “thunderstrack” was used on other build.(resists elemental and aether was poor with new glove. also stun reduction so I could keep same ring and chest)

faster which also means bit safer in SR because you can keep stacks of shatter souls more easy.
did some 75-76 runs and it was nice and easy.
here is after one such run 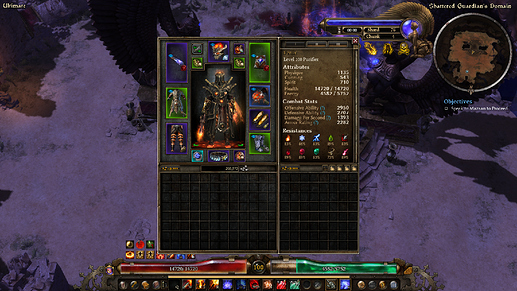 I would call this build a good 75-76 farmer if you wanna get items fast but also decent challenge.

Another update: due to feedback thread about big one [Suggestion] "The Big One" problem
I also tried with using rune of kalastor, and minimizing big one: https://www.grimtools.com/calc/nZoQO6B2
deals more damage than big one, but one more button to press. We have many + skills to rune and artifact handler so why not use it?
Hope to see some more buffs to big one in future

hi I’m new to this game but thanks to you I love this build and have played it ever since, can I ask you: since the trap is scaled with player damage bonus, why spend so much point in devotion that buff pet build?

why spend so much point in devotion that buff pet build?

Many devotions have pet bonuses, but all devotions I choose have specific purpose. If one devotion that I took happened to have some “pet bonuses” as well, it is just by accident - it is the other things I wanted.

For instance, Raven is choosen for its 5 green bonus, to get to Torch (also has a nice +3% OA node). Another option to get 5 green affinity would be to get Scolar Light + a green node in crossroads. But then OA will get worse by not taking Raven.

Hello Ulvar i might try this after my AAR spellbinder. I did your EoR shieldbreaker build and its the first vuild that i used to complete and kill korvaak.

the other green items are not that hard to get

Hey have you tried Lizard+Lion instead of Tortoise for more regen or is Turtle Shell essential to survive deep SR and Celestials?

I don’t think Lizard is worth it, too low numbers. Its like +200 hp/s at base

slower attack rate will suck, I think they fire projectiles too slow…

Burn dmg on Big One might be useful though.