Archon (Shaman, Oathkeeper) is one of the few remaining classes without budget build / leveling guide in the Beginner build guides Compendium (for AoM + FG expansions). This untenable situation is hereby to be brought to an end. As a class with dual resist reduction (vitality, bleeding, elemental), two attack skills of its own, as well as a few support skills, it’s theoretically not a weak class. However, the class is not that popular lately and relatively few endgame builds are posted. Probably because other class combinations offer the same only better.

However, while i can’t really say anything about the current state regarding endgame goodness, there are at least some endgame option listed in the Build Compendium X (Forgotten Gods) - #2 by Stupid_Dragon and also in the GrimSheet: Endgame Build Table - ETE edition [v1.41] .

Another good option to level an Archon should be no cooldown Primal Strike. There is no specific guide, but this [1.1.9.0] Beginner's Lightning Warder should help to get the general idea. The here proposed way to level - given the strong Shaman focus - should also work for other classes with shaman and physical resist reduction, i.p. Conjurer.

Having a Crush (for Physical Damage)

This budget character is a physical damage two-handed melee build. Shaman offers special two-handed weapon skills, Oathkeeper brings the resist reduction and minor buffs. The key item here is Troll Bonecrusher, with its bonuses to Feral Hunger and Savagery. Savagery is therefore the standard attack, Feral Hunger is the regular “area of effect” nuke - and works well in this role. Leveling up was relatively smooth, an increase in strength was constantly noticeable and the character rarely felt weak (and than likely self impossed).

The character uses a double rare weapon twice, the first time the weapon was used much longer than reasonable (until level 100 - end of the main campaign and until all items for the final character were found), the second time the farming for a worse weapon was stopped after the self-defined maximum farming time. No single rare weapon with the desired prefix (Tyrant’s) was found - but two other double rares. The damage with a single rare should be roughly comparable (higher attack speed but less damage), with no rare affix weapons the damage will be lower.

A few of the final character’s items are a bit tedious to farm, including the amulet (Zaria’s Pendant), the medal (Rylok Crest) and the girdle (Chains of Brandis). Especially the latter can be quite tedious and time-consuming. In this case, epic gloves and crafted boots were also used for the final character, but the faction gear alternative should also work well enough.

Only self-found equipment and self-found crafting materials were used while levelling. Also, no mandates were transferred, writs were bought as soon as possible. However, all necessary blueprints were already found with earlier characters. The character was started in 1.1.9.2., update to 1.1.9.4 happend between level 20 and 30.

Grimtools of the current character. Attribute points are invested in Physique and Cunning, with a slight stronger investment in the latter. 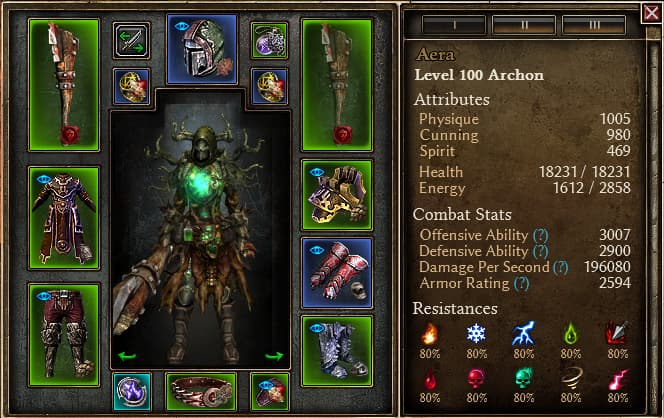 Using a stronger faction gear setup (different gloves and boots), it is already possible to cap all resistances skeleton character (= without affixes), however, OA is rather low for a physical damage character, so gear should increase OA.

Hello, sorry for necropost, but why not pick Azrakaa proc and put it on, say, wendigo totem? Seems quite logical to me, it’s a good proc

As long as a build is not from the stone age - asking a question here is not necropost.

I have not taken the proc of Azrakaa because there was no free devotion point to invest - I found the OA bonus from Chariot of the Death more important (as crits are needed for Assassin’s Mark).

Other options to free up some devotion points would to either invest some skill points in Judgement (DA shred) and/or Ascension (temporary OA bonus) and therefore make the OA bonus from Chariot no longer necessary - or solely in the devotion map: take Hawk instead of the four Chariot nodes and invest the remaining point in the proc of Azrakaa (the initial planned setup which was not used while levelling the character because of the boni of the the other Chariot nodes)

Thank you for the answer! Since wrirting the original comment i tried actually specing Azrakaa, and came to the conclusion that it is indeed inferior to more OA from the chariot node.
I was actually wondering about some more skill choices, so thank you for that. My build isn’t that optimized for endgame, I’m a fairly new player, so i was considering taking something like Ulo to at least not die to ulti Loghorrean. Cheers!