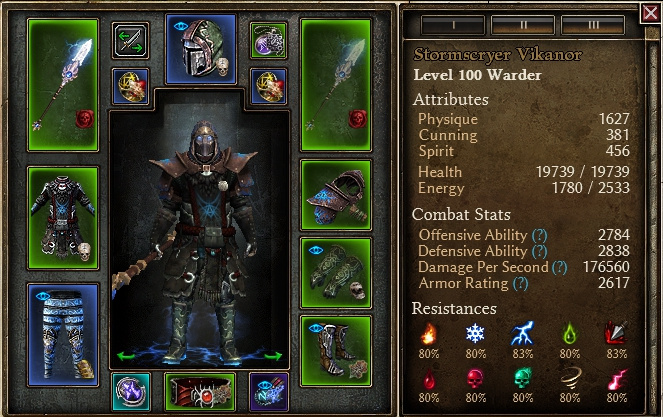 Congratz, everyone. One of the most recommended builds for beginners since times immemorial now has a guide available, in dragon quality to boot.

I have quite a history with Primal Strike, it was one of my most favorite skills in vanilla, but one can level just that many characters with it before getting weary. Beginner’s Lightning Elementalist was the first beginner build I posted a whooping three years ago. I always regretted the class choice I made back then, it was obsolete really fast. Druid would had aged much better.

Anyway, the preferred high end class for Ultos set based build went from Elementalist and Conjurer in vanilla through Vindicator and Druid in AoM and early FG, but recently if you say Ultos you’ll hear Warder. This is a relatively new trend, and I tend to follow trends. Two years ago I wanted to remake my Elementalist as Conjurer while one year ago I had faith in Druid. But today I post a Warder.

Honestly I was taken aback by current dps capabilities of Primal Strike. If you check out my Elementalist from three years ago you’ll see that sheet dps of a very similar setup didn’t exceed 100k. GT has a Savagery setup but I vividly remember Primal Strike had been only slightly higher, around 95k or so. Granted that I was a bit lucky with gear, I managed to push sheet dps to 170k+ this time using new gear and state of the art building knowledge. Totally not powercreep I tell ya!

I think it can do at least SR65 on softcore, but I’m too lazy to test it out.

Anyway, hope you enjoy it.

Credit goes to @Slev1n for poking me to make a Warder guide. He has some personal interest in that as an author of a couple high end up to date Ultos Warder builds, which I can recommend you as an upgrade over my budget setup:

Awesome guide Dragon, especially with the layouts you do and detail in your explanations. Always great to see more beginner guides and in more varied playstyles as well.

https://www.grimtools.com/db/items/8252 these shoulders, if rolled well, can be awesome for PS too. And frees up the leg slot as well to consider tankier options.

https://www.grimtools.com/db/items/8252 these shoulders, if rolled well, can be awesome for PS too. And frees up the leg slot as well to consider tankier options.

Oh right, I forgot to put them as an option. Gonna fix tomorrow.
Yeah, they are superior to faction ones even with relatively modest affixes. I even had an amazing piece but decided to go with Coven Spaulders as more accessible.

Lol, Glenn’s PS Warder was his second most popular iirc.
Funny enough but it’s how it is - guides for cookie cutter content crusher builds will be popular while guides for unorthodox memey builds will be left collecting dust.

There are at least one question / day on average on Discord on how to level and gear warder from scratch. Now they have two guides

(Well one, because I am still too lazy to finish my guide xD )

I can add it to my beginner compendium if you want

I can add it to my beginner compendium if you want

You’re free to add it if you want. I was feeling reserved about adding my own build to Compendium’s beginner section whence I can’t even recommend it in good faith due to it’s sheer micromanage requirements, required pet mechanics knowledge (which is covered in the guide though) as well as being a very off the meta thing. Not for everyone, to say the least.

Also since PS build was in my plans, I can focus on my Purifier plans.

Also since PS build was in my plans, I can focus on my Purifier plans.

Thanks and good luck! My plans is to finish PB Reaper (basically long done, formatting hassles sigh) and then no idea, maybe give a long needed facelift to my blademaster.

Quick thing, seeing as I’m currently following this guide:
You can’t take Ultos at Step 14. It requires 6 Red and you will only have 2. I solved this by just taking Viper and Jackal first, so it was hardly an issue, but it felt worth pointing out as to not confuse people even more inexperienced than myself.

Quick thing, seeing as I’m currently following this guide:
You can’t take Ultos at Step 14. It requires 6 Red and you will only have 2. I solved this by just taking Viper and Jackal first, so it was hardly an issue, but it felt worth pointing out as to not confuse people even more inexperienced than myself.

You’re right, thanks for the report.

Thanks for the guide.

As a complete noob I am wondering what Attributes I should level and when. Thanks for any answer!

This is fantastic, thank you! When I started playing about a year ago, a lightning warder was exactly the build I wanted to make…and I failed miserably having no idea how the game worked. Still only scratching the surface of understanding things, really. I just respec’d an abandoned lvl 20ish toon I had sitting around into this build and love it! My other toons get to take a vacation while I play this one for a while.

Just a follow-up here. My warder was gifted with Lokarr, xp pots, and a stack of faction mandates, so at times was out of sync with the guide a bit, but overall I give a hearty thumbs up! Nice power curve progression while leveling up that keeps you interested and happy, I think that is of high importance for beginner build guides to keep a player hooked on the game. I kept looking at the recommended greens that would have filled my Lokarr slots and I think they’d have worked nicely if playing strictly with self found gear and faction progression pieces from the start.

Second note, kudos to Slev1n, I had just enough Ultos pieces in my shared stash to xmute a full set and am trying to round out the non-savagery crutch build. Even stuck in a non-optimal middle spec state, it’s a monster and is head and shoulders stronger than any of my previous toons.

Lastly, for what it’s worth, my son had no interest in GD until he saw me crushing everything in sight with a screen full of lightning. Now he wants to give it a try and level a warder. =)

Really helpful guide. Just started playing this game and so far having a blast with the build. Thanks!

Really thorough and informative! appreciate the time and effort you put into it!

And thanks to Ulvar1 who linked it to me I can enjoy it.

One question - wind devil - its just fire and forget right? I noticed WDs are kind of erratic.

Just resummon them every time you’re engaging a new boss/hero and you’ll be fine. It’s not like they are flying away at random.