^How I feel everytime I make a build using eldritch pact. I love how those projectiles look like they are shooting out from my crotch. 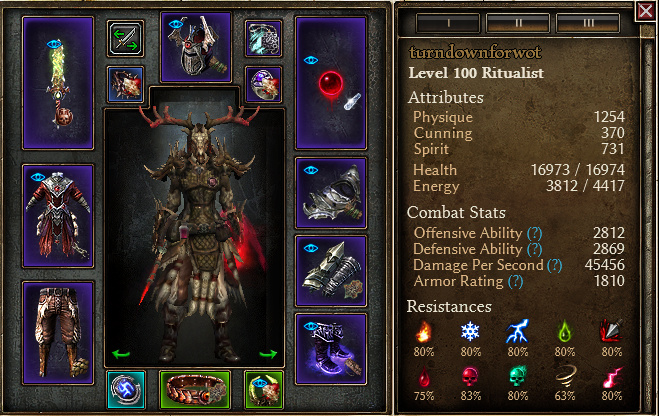 ^Screenshot of build using the Recommended GT. All passives up, no procs active.

How does the build work offensively?

How does the build work defensively?

Alternative itemization (note: Build used in video/guide is NOT BiS’d)

Levelling Guide (this will be added on gradually, as I intend to make this a build journal. I also may or may not finish the journal. This largely depends on life.)
NOTE: This guide assumes that the reader has the AoM, FG, and crucible expansions. I will also be playing largely self found, but will also be using my library of blueprints to craft items. If you are missing a blue print you need, head over to the trading thread. I am sure MANY veterans will be willing to help you out. I will also use GDstash to produce crap like faction rep and aether crystals because I ain’t got the time to farm that shit, and write this thing.

For a video demonstration of how the spec plays during the level 70 - 94 levelling abyss, click on journal entry 8: Levels 76 - 79.

Process might take a while, but here’s a quick summary on levelling…

Dude, could’ve waited for me and we would’ve posted simultaneously )

ah, wait, you got Ritualist! Damn it! Still though, would’ve been cool.

Just wanted to post it before I head out for the day.

Congrats on posting this build! So people taking my role with Dark One builds, that’s so dark

I am gonna say times are very good and naked Crucible too for the treasures’.

I might eventually transform this into another beginner’s guide, because dark one’s set is just so damn strong, and isn’t item dependent.

I might eventually transform this into another beginner’s guide, because dark one’s set is just so damn strong, and isn’t item dependent.

Yup in my playing got fully viable end game set in 2 hours, so you can imagine. And caster is the proper role for vitality damage.

Dark one’s set is exactly where it needs to be: A non-top tier, but still incredibly powerful target-farmable set which allows anyone to transition into a true ultra late game build.

Dark one’s set is exactly where it needs to be: A non-top tier, but still incredibly powerful target-farmable set which allows anyone to transition into a true ultra late game build.

Also agree. If Dark One was top set it will be unfair for all other sets requiring thousands of hours of farming. But if sucks, then what’s the point?

Do you know how krieg’s set compares to dark one’s?

Maybe it’s because I personally love chaos/acid/vit damage types, but dark one’s seems better to me.

Nice. The RE workhorse in action.

ah you posted it! and you’re on the new forum!

build looks pretty good, a few optimizations compared to your old version I have before me
the wendigo totems were already insane, bet this works even better
gearwise it may be a bit more unattainable with the stolen dreams belt substituted for a green, but oh well

@hammyhamster1: More like vit RE workhorse. Acid RE has miles to go before it catches up, if only because of the lack of stats in acid builds.

that crazy ass vid though…

edit: naked 9:30 is a pretty nice result as well

that crazy ass vid though…

edit: naked 9:30 is a pretty nice result as well

To be perfectly honest, you could remove the prefix on the belt entirely, use another ugdenbog leather, and achieve similar results.

alright, if we’re really going there removing blighted is doable while slightly undercapping poison/acid res, but no biggy
farming lunal’valgoth is a pain though regardless of prefix or suffix

Not trying to argue, just trying to reassess what a realistic build actually means:

But wouldn’t lunal’valgoth be target farmmable? I would have thought that it’d be easier to farm for than say a specific purple.

oh yes definitely, I would argue getting any specific purple is just as much a pain as getting a decent MI of any kind
not counting target farmable purples like the dark one set

Right. Okay, that makes sense to me. Just wanted to make sure I’m not heading down the wrong direction because I do want to transform this into a beginner’s guide eventually.

oh, ok
if that is where you’re heading it does change things significantly
no beginner is likely to get even the dark one set, let alone the right rolls on lunal’valgoth and the medal
my two cents, if you were to change this into a beginner build with a leveling guide you would need viable alternatives until players are able to farm for the set at least