Updated for 1.1.8.1 : minor changes since 1.1.7.2, the build may be very slightly more powerful, no change in gear or skill points were necessary. 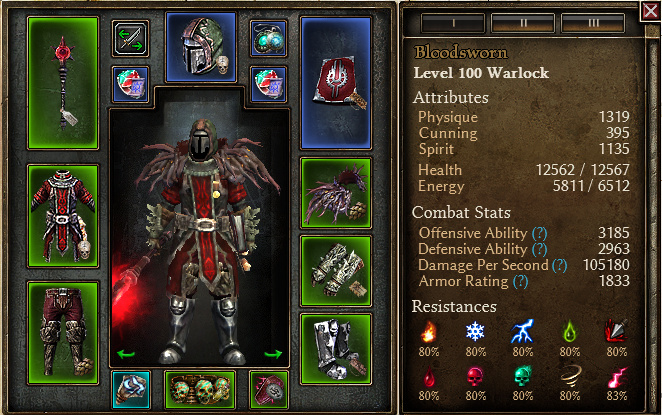 Welcome to my new guide, focusing on Albrecht’s Aether Chaos Ray, Doom Bolt and Sigils of Consumption !
It is aimed at beginners and solo self-found players, to help you build a chaos warlock from character creation to a first lv100 setup without any prior gear. Feel free to ask any question in the thread, there is no dumb question !

What is the build about

To sum it up quickly : it is a channeling, pure caster made to be tanky enough to stand its ground.
The main skills are Albrecht Aether Ray, a channeling spell with AoE in the form of piercing through targets, and Sigils of Consumption, a ground AoE skill that heals you back, a self-heal/buff, 1-2 debuff(s), and later Doom Bolt for more single-target damage, making the build relatively active.
What makes the build tanky is the damage mitigation provided by Maiven’s Sphere and Possession, and a lot of life leech abilities : Sigils, the Wendigo and Scales devotions, and Aether Ray while levelling.
The build is quite easy to play, keep the Aether Ray running, only interrupting it for debuffs and the other spells. You only need to reposition to line enemies up for the ray or to avoid stacked ground damage or serious physical hits.

The build allows you to farm rogue-like dungeons and totems to acquire gear. Better gear is needed for the Tomb of the Heretic, Morgoneth is really difficulty.
It has not been tested in Crucible or Shattered Realm nor against Lokarr as I advise having higher quality gear to attempt that.

INTRODUCTION Hello everyone, since AAR is still strong after the nerfs, I decided to revisit one of my older builds, which is Chaos Ray Warlock. After some tuning, the build turnt out better than I expected, so here it is. GRIMTOOLS craft for stun res Generic well all around Version Slightly altered with less DA, but more damage Tankier Version with Hourglass ( use Ravager’s Eye augments for Callagadra) Glassified Crucible Version You need DA and Stun reduction on the pants, if you do…

Hello and welcome to my first class guide!

What’s that Eard, you’re dumb and have long suffered with the understanding you need ~2700 DA for SR75-76 to feel safe, constantly fretting on builds that need to go out of their way to reach this mark?Well let’s get drunk, spirit dump, and throw up on ourselves with… 2 3 1 0 DA This is not a full build guide yet as this is still under testing and most likely won’t end as a full yolo, but wanted to show some silly results when DA is ignored. Shout outs to @Duchy, @hilly, and @Monceaux for also…

Spark of Reality got buffed pretty hard in the latest patch and I wanted to try a DW Warlock using this item. The only warlock build I could find using the Rah’Zin set was from @eardianm. Here’s my shot at the same concept. [RahZin%20Warlock%20stats] With permanent buffs, Hungering Void, Mirror and Arcane Will Grimtools: https://www.grimtools.com/calc/xZy0We0V Performance SR 80: https://www.youtube.com/watch?v=3n6yenoxvEM Ravager of Flesh: https://www.youtube.com/watch?v=tN0CoICiYkw Mogdr…

That’s more sheet dps than what one could expect with lack of conversions. Surprised you didn’t go for Bloodsworn chest for extra 30% fire to Chaos.

Great guide, congrats for making it!

Nice one!
That’s more sheet dps than what one could expect with lack of conversions. Surprised you didn’t go for Bloodsworn chest for extra 30% fire to Chaos.

I did during the whole levelling process, honestly I just should have kept it on the final setup, it’s way better than that extra Doom Bolt rank.

Thanks, I see what you did there

Nope, GoE’s transmuter is a unique case (or should I say, the last of its kind) where it replaces the skill by another one instead of converting the damage.

GoE’s transmuter is a unique case

Thank you for sharing the build. I’m playing the game on Normal / Veteran difficulty. I played crucible up to Level 20 for devotion points, then started playing main campaing. I just came to act 2 right now. But for now, I have resistance problems. I have 2 questions.

What am I supposed to do, can you help? Sorry for my wrong English.

I shared my own build on the link below.
https://www.grimtools.com/calc/q2Mo3KbZ

First, congrats for reaching this amount of casting speed at such a low level

Don’t worry about the cast speed, I completed normal (and switched to veteran at some point) with something like 140% cast speed on average, maxed AAR + Disintegration destroys normal/veteran so fast you don’t even need much cast speed.

The sigils’ base node is vitality damage and you have no %vitality damage so it doesn’t hurt enemies thus doesn’t heal you. I should have specified you absolutely need a bloodsword scepter to be able to use them, so I’m sorry if I didn’t or wasn’t clear enough, I’ll fix that.
For the meantime, focus on maxing AAR, it should destroy things fast enough so that you don’t need the sigils’ healing right now (you have health potions for emergency, it’s perfectly fine at this point of the game)

Edit: I was indeed not clear enough, as I wasn’t fully clearing the game and got my own scepter in the early 30s. Until you get your own, using Blood of Dreeg instead would be a good idea, you can also replace Fiend by Bat in the devotions, it uses the same amount of points and gives the same amount of affinity, so you trade some damage for safety without hurting the devotion path.

First thanks for this guide man, i am interested on aar builds and especially warlock because red…

I looked on another aar starter build (templar scorching ray by stupid dragon) and wanted to know if there are easily available endgame items similar to hexflame for the templar build . I am very fresh player at this game so my stash is not great, i would just like to avoid if possible farming for totally random drops…

So is there any endgame monster infrequent to hunt for or faction recipe, or do warlock have to walk the hard way ?

thanks again for those starter builds , they really help guys !

Unlike the fire version, chaos won’t have much conversion until the Black Flame set. You have the Bloodsworn robes (MI) at any level to convert 30% of the fire, others are random drops : the regular lv75 Black Flame dagger for 30% more global fire conversion, lv65 Sash of the Bloodlord for 50%, and some lv94 rings. Another option is the Triumvirate helmet that is dropped by the Sentinel for 25% fire&lightning to chaos but you lose the +1 to all skills.

Still, the dps should be on par with fire AAR with Hexflame, the other skills (Sigils & Doom Bolt) are mostly converted to compensate.

Thanks for your suggestion,so the hard way it will be

Btw i think something is messed up in devotion road, chaos+ fiend+lotus give 6 green and 3 red, can’t reach solael :).
fiend + bat ?

My mistake, I swapped Viper and Solael. Take Viper first and you’ll have enough purple

Hi nice guide, just started following it. I would suggest you to add, what Devotions you attach to each ability

Hi nice guide, just started following it. I would suggest you to add, what Devotions you attach to each ability

Good idea, I added a small guide to binding devotions in Levelling Guide > Devotions, as well as the reason why I chose this bind for each devotion under Build Explanation > Devotions.
You can also check the devotions on the various grimtools links in the levelling section and on the main lv100 setup (on which I fixed a broken bind) at the top of the thread.

Thanks, I can’t say I invented it, the concept existed before I started playing

Heyas, thanks for the guide. I’m trying to set up the devotions, but when I’m trying to remove Lion, I have Scales and 9 Order, which breaks dependency for removing Lion. Could you elaborate, as I must be doing something wrong?

Have you fully completed Scales ? (with the left 2 nodes) With full Scales, Lotus, Panther and Watcher you should have the 8 yellows you need

You’re on the nose with that! Thanks, it was difficult to spot, but one of the stars was unchecked. Darn these old eyes. Cheers!

I never played Arcanist before. Nor Warlock. But this build is quite fun. Firing mah lazer on everything is very satisfying. So far I’m pretty proud of my character. I just reached Homestead, and it was a real breeze. And I was lucky with my loot. If some beginners want to see a character at level 29, here is my GrimTools. I was quite lucky so I have some nice blue items ^^ https://www.grimtools.com/calc/nZoyaoE2