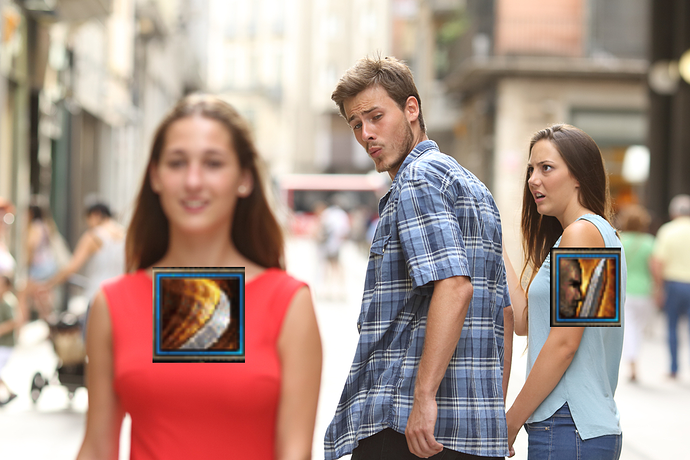 Thanks to Tararihen from Safarael Discord community for providing the picture

Two-handed melee builds have never been meta in Grim Dawn. Unfortunately, they still lag behind dual-wielding melee characters. Recently there has been a very tiny 2-handed resurgence in a form of a very solid and powerful 2-handed melee Archon made by John Smith which I personally recommend to check out and try. So inspired by that build I have decided to dig out one of my old pre-FG projects: Leviathan Witchblade.

Decided to refresh the spec and try and adapt to a new “Bleeding as a support damage to Pierce/Physical” meta. Results are pretty astounding, build became the fastest physical build currently and probably the fastest one ever. Credit to @banana_peel for coming up with this idea to use Bleeding as support damage for a Pierce two-handed Tactician - I am using it on a second build (this time it’s physical) and it’s pretty awesome. Credit to @Shoot2033 for his idea to use Deathstalker. Credit to @Superfluff for convincing me to try Scales of Ulcama devotion on a physical build with Gladiator’s Distinction belt - it works really really well (and sorry for taking the title of the fastest Blade Arc build away from you, Fluff

So Gutsmasher has finally arrived. However, I had to change up some stuff because of how much more harsh Crucible has become compared to 1.1.2.5. Mark of Consumption is a must have now. Oleron relic added some spice to the build as well.

*Craft helmet/medal for %physique or Freeze resistance and Slow resistance. You can choose different resistance augments and physique/cunning allocation depending on your gear rolls.

Bleeding damage on a physical build?? How does that work?
It works amazingly well, actually.

Why no Cadence and Blade Arc with a transmuter?
It’s much worse and barely performing, I have tested it.

But what about using Cadence just for Deadly Momentum? Damage buff from DM seems huge.
I have tested it too. It’s too clunky and damage buff is not noticable because of missed Blade Arc hits.

Isn’t 3-piece Warborn better with permanent War Cry?
Nope, tested it too, Bloodrager is superior in every way.

Pretty much every item is best-in-slot here and was chosen after hours and hours of excrutiating tests. Bloodrager set, Gutsmasher, Grasp of Unchained Might are core of the build. Blue boots and Mythical Menhirian ring were chosen due to their amazing stats and to properly overcap Aether resistance. Boneshatter Treads boots offer a tiny little bit more damage but make build less consistent.

Standard skill distribution here. We need Veterancy for a monstrous Cunning dump that build has. This devotion setup is optimal, I have tested one with Revenant and also another one with Empyrion. This one is the best on all fronts. Rend procs wonderfully with Curse of Frailty.

In Crucible build facetanks everything. But you have to be extra careful on waves 169 and on 170 if Grava pops out and Korvaak is still alive. Be sure to take out Grava first.
In Shattered Realm build can comfortably farm Shards 75-76. Just be cautious at boss chunks and aggro bosses one by one.

I recommend searching for levelling guides on this forum written by Malagliwien, Stupid Dragon, Sir Spanksalot, Nery and other real builders.

With permanent buffs and Blood of Dreeg 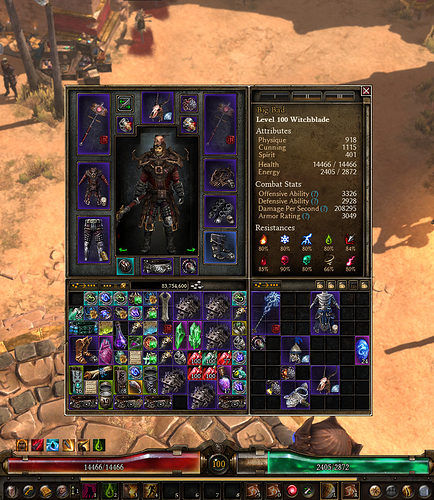 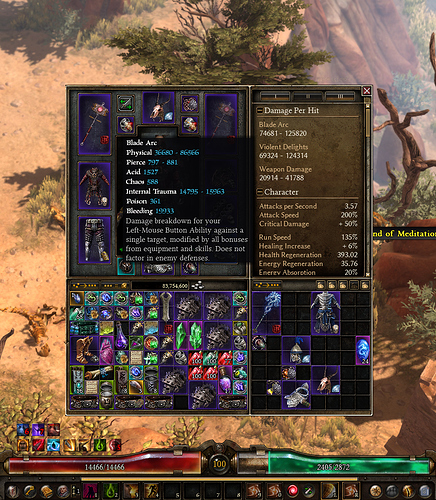 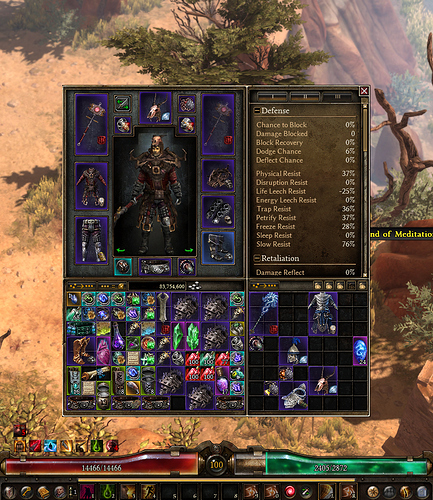 6:45 Crucible Gladiator run by me OLD

Thanks to John Smith for pointing out that Cadence’s Deadly Momentum is not needed in this build, it gave the build a final polish it needed.

I was wondering were the Vit damage from Second Rite was going, then I saw the belt.
That’s really neat, and it’s almost a side effect since that belt’s great for Phys builds regardless.

Seems that you cover the possible questions

About cadence and 2h.
I see 2 main problems:

Well, considering your answer to my question on your thread I understand why you’re surprised

Nice and surprising build. Didn’t know Arc had it in him.

Seems to be quite a lot of bleed in there. You got some rr, too. Just the global %dmg isn’t there. Do you even consider it a contributing factor or is it just clutter?

That you can fix with just a few clicks https://www.grimtools.com/calc/m23J799N

Joking aside, all this build needs for solid SR performance is first of all more health (MoD or something would maybe do the trick) and then some better key res overcaps. Seems achievable if you sacrifice 30-60 seconds in crucible.

Res overcaps are not a problem, neither is hp. Problem is the very nature of the build: 2-handed melee weapon. It doesn’t hit often enough compared to dual-wielders with wps to sustain critical situations. Another problem is lack of any kind of flat damage absorption and inconsistency of damage reduction from War Cry without Warborn hat.

Health won’t affect this build since it lacks health reduction resistance. Look at John Smith’s Archon - build looks similiar (melee physical 2-hander) yet it’s completely different. His can stack hp and hp reduction res, his build does have flat damage absorption and also has huge leeching wps. Occultist offers none of those things.

would incorporating bat be of any use since we convert vitality to physical?

I had it on my Ashes of Malmouth version of this build - a project that I scrapped back then because it wasn’t good enough for my standards. It performed okay-ish back then though. Bat worked pretty well on that build.

Here I didn’t find a place for it in this Witchblade. Curse of Frailty turned out to be a great proc machine for Azraaka, so there was no skills left to proc Bat (I didn’t want to add Bloody Pox, tried to streamline the build as much as possible, thanks to John Smith who pointed out that Cadence was not needed).

That’s right but even if you had those things, like (in an abstract situation) free Bat on an excellent proccer with good life redux res, venturing in deep SR with 11k health and under 30 on fire and other key res overcaps would still be testy.

But about res, I’m sure these are optimal because I know your builds. You’d have to ruin the build with suboptimal pieces or go 8 MIs to improve on this,

About health, I bet that 75-bragster-warlord copies of this build with 16k health and no crucible vids will start popping up soon enough!

I could swap a component in boots to get 15% elemental overcap, because slow resistance is not as important in Shards as it is in Crucible. Coupled with good elemental resistance rolls and a small augment reshuffle it would yield me 40% elemental overcap. And it wouldn’t make a difference. This kind of build is just all wrong for deep Shards. Warlord can make this spec better, no doubt about it. I might even test Warlord variant of this build later. But this spec gives poor Witchblade at least something to be proud of and I am happy with that.

If only Zantai had listened to my suggestions about making Leviathan a Witchblade weapon, sigh. Instead Leviathan has this horrible Amarasta’s Blade Burst mod which is more of a sad joke then anything.

I am probably from minority of people,but I don’t think Warlord will be leaps ahead of Witchblade.Yes in SR maybe,but for 2h and not shield version it’s not gonna be groundbreaking.

As for ABB mode,I was testing physical Dervish and was not satisfied with results.Leviathan just screams physical Nightblade,but since you lack physical RR,is tough to make sense.

Daily reminder that phys dw blademaster works. Dunno how good it is nowadays but it works. I’m not too positive about dw phys dervish tho. Pierce has a better devo route and pierce made me use a shitton of godlike greens for it to work well. Phys has better non MI weapons tho

That JoV’s build was one of the first dw that killed Ravager and did naked crucible if I remember right.

But in general, I agree with the sentiment that paring soldier with a mastery without stackable phys rr is no good. I’d rather see acid to phys to BoD on Leviathan than these ABB mods that serve no purpose beyond addressing the audience of gimmicky builds. These mods would be interesting if Leviathan could be broken in half and used as dw

I’d rather see acid to phys to BoD on Leviathan than these ABB mods that serve no purpose beyond addressing the audience of gimmicky builds.

Why replace when you can just add it? Items support three clases nowadays

Daily reminder that phys dw blademaster works. Dunno how good it is nowadays but it work

It probably works to some extent but nothing to write home about. Current Crucible is really tough for non-synergetic builds, I have recently gave my dw Death Knight a whirl (since I was testing stuff in my gd-stash folder) and it’s still super solid but not carefree crusher it used to be before Forgotten Gods (or even before recent patches that nerfed Soldier a bit). It’s still a crusher but now you have to pay attention and position yourself better. And Death Knight got great survivabilty because of the huge synergy with Soldier and Mark of Torment coupled with Reaping Strike.

So I kind of have doubts of how smooth physical dw blademaster would be. And why would anyone want to play him anyway when you have a pretty amazing Belgothian spec which just feels great in Crucible and is so easy and fun to pilot.

@mad_lee how much phys rr to Veil of Shadows on Leviathan do you think would be reasonable to make blademaster compete with this?

Well, same amount as CoF gives I guess. But let’s not put gimmicky ideas into Crate’s heads, Nightblades got plenty of god-tier builds and nobody is really asking for a Nightblade with a 2-hander. I hate how Crate sometimes forces players into some gimmicky niche builds with specific item mods. Those builds end being never used because they are extremely anti-synergetic and always lack support beside that one item.

well @mad_lee thanks for this build anyway i tried everything from warborn dual wield to markovian tanks to shield variations to dual wield again and it all seemed meh until i tried this 2 h build its really nice.