The reason behind this build is to make a viable physical mage that is fun to play. I have decided for a Templar because of physical resistance reduction on Guadians of Empyrion and on Olexra’s Flash Freeze. Build also uses Judgment and freezing enemies with OFF and then Judging them is quite a funny mechanic and clears trash immediately

For more usable OFF I use Arcane Conduit for it. Although OFF doesn’t work on nemesis, build is very strong against them anyway and it is great against trash and non-nemesis boses. And as a main attack skill Obliteration from Tome of Arcane Wastes is used. Guardians of Empyrion are used as well. For conversions to physical damage Beronath Reforged is used and Gladiator’s Distinction (for devotions). Build does SR 80 easily.

Build needs one green item but it is craftable - Emberguard Gauntlets. You want bonus to casting spped and phys res. Attribute points are distributed towards cunning. You need 4 crafting bonuses to physique on sword, helm, gloves and pants otherwise points have to be redistributed! Put as few points as possible to physique and spirit and the rest into cunning. 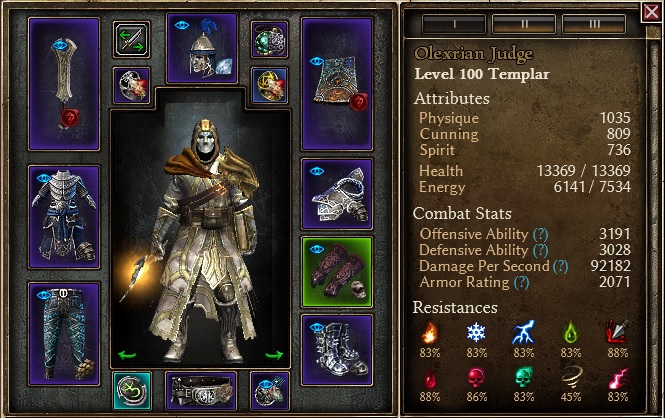 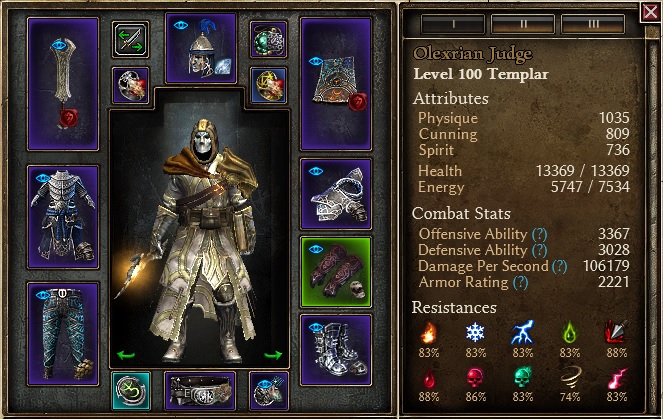 This build does SR 65 very easily. It can even do SR 80 but it is tougher. Physical hitters are becoming dangerous. Run away from Benny’s crystals and Alex’s meteor. Some enemies are slower to kill. Often in SR you have a mutator that decreases enemy’s CC resistance and with it you can freeze even nemesis. But even without it, it is OK. I use as a movement skill in SR Amatok’s Breath for freezing enemies and applying nice internal trauma damage.

I salute your build with this song Hammerfall - Templar of steel

Oh man, Hammerfall! Lol. I havent heard them since I saw the open for Dio, who opened for King’s X in Worcester, MA back in the early 2000’s.

What a weird couple of opening acts for King’s X. Was a great show though.

Converted fake AAR! Looks interesting! Can you share a video of SR 65-66 run? I wonder what its damage like.

Usual ticks of Obliteration are around 30k I believe but everything goes down pretty fast. I would have to learn how to do videos. And I don’t really want to… Everybody can try it for themselves if they are interested. It clears SR 65-66 fast.

It’s pretty simple, download OBS, it’s free and easy to setup. That way people can really check out the build you have shared before trying it out or even leveling a char for it. One video of a build clearing SR or Crucible or even Roguelike is usually enough to showcase what build’s really like.

I looked at it closer. Ticks for Obliteration are around 15k, above 30k are crits. But still everything goes down fast. I have not had a problem with any nemesis. Did not met mad queen though in SR. But I am not good at playing against her with any build. Grava was ok, Gargabol as well.

I played with it like 10 runs in SR 65-66 and got only killed once because I lost my attetion because of how easy it is. And I am not a good pilot.

You can record easy even without 3rd party programms if you got windows 10.
Just hold windows button + alt + r, you can turn recording off easy just by clicking with cursor without exiting GD. That’s all what you need really. Youtube is easy to use, if you got google account just log in and add captured video.
I would like to see how build behaves too so it would be nice to show some video

Max damage it did was 232k problably in SR but I am not really sure from what.

Max I can do for you in this regard is to upload the files of the build. You can try it for yourself.

It’s absolutely within your right, mate. Just giving you a tip on how to really properly share an interesting build.

I have another physical mage prepared. Even slightly stronger than this one. I will post the build in the coming days

What is build crucible time? How fast?

I don’t play Crucible. It is written in the description of the build.

But how we know build is good or bad?

Some People dont Care about crucible. The requests about videos and crucible running in this thread is silly.

Crucible isn’t the only judge of a build, just the one most of our speedrunning elitist builders use for their meta. Practically any build can do the main campaign.