Lightweight Mod for Speeding Up the Leveling Process

A lightweight mod that is intended to speed up the leveling a bit.

I wanted to keep this mod very simple, so it does not change anything within the base game, but only adds a few new things on top of it.

Drop Chances are not easy to calculate, but to get an idea, here are my rough estimations:

More valuable Beutekugeln are weighted more than less valuable ones the higher your Character Level is. Higher difficulties increase the amount of loot a Beutekugel can hold.

These changes are completely optional and only appear in the second version — Non Lightweight. There are already many great mods that do similar things and are probably more tested, but I wanted to offer these changes nonetheless.

It is recommended to start playing this version (with a new or existing character) on Ultimate, as most of these features, such as the Mystic River and the God Events, are only available there!

This is not intended to be a balanced experience.

You can use the Translation Templates to patch Rainbow Filter: Read this

Diablo 3 Classes created by Grimer are incorporated in this version. Current version is DE U2. You can view the mod page here!

If you don’t want to fully start over by playing Custom Game, consider doing what is explained in this comment. Note: You have to download and use the Custom Game version listed above, not the one below.

Affixes for Uniques mod is included in the download. Must be installed as instructed in the linked post. The one included has a low chance (20% to 30%) for affixes to appear on uniques and also includes normal affixes. Don’t use with Dawn of Masteries.

Compatibility for Dawn of Masteries.

Patch can be found here

I recommend you to start playing on Ultimate right away should you use the Faster Leveling (N) version.

The expansions Ashes of Malmouth and Forgotten Gods are required, as well as the Crucible DLC.

Multiplayer does not work.

Got two of the white spheres but how do I pop them? Cant seem to figure it out. right click, ctl + left & right, alt right & left, shift left & right all no good.

You destroy them, literally.

Can the Sam the dog item not be used outside of “town”? I used a 75%xp boost scroll and then rifted to burwitch outskirts but forgot to summon sam, and when I tried summoning him in burwitch outskirts it did not work and the item disappeared, so I had to exit and enter the game again. Wasted that 75% xp scroll

You should be able to summon him everywhere, try it once for yourself next time you log in by teleporting somewhere and then using it.

Did you maybe try to put the item into your stash before? This summons him once, but does not remove the item, and next time you use it in the current game session, it won’t work. There can only be one dog. I will fix this eventually!

If you are playing Custom Game, you could use the console to give you the scroll back, if want so. Command is game.give “records\__mod\scrolls\experience_scroll_m.dbr”.

Oh I’m dumb, I must not have seen him inside the portal lmao. Yea tried it again and it works. 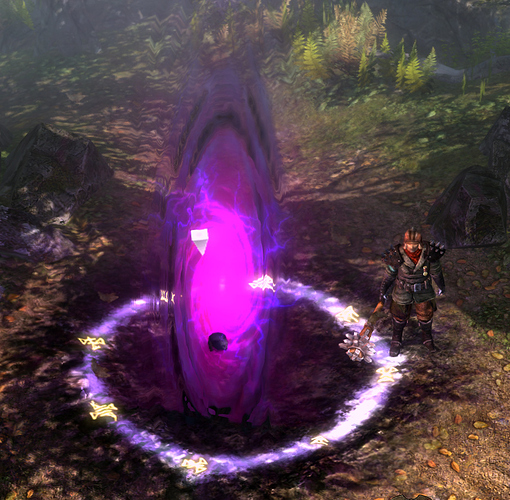 Made an oathkeeper to check out after reading comment on nexus. Hes right it doesnt work when you choose this class its all blank skills with little red xs.

Gonna release an update soon that improves quite a few things, and also adds a new mechanic. I will fix this then, although I don’t even know how this bug is possible, did not change much …

Thanks for letting me know!

EDIT: Already found the reason. Fixed with the next update.

I was wondering if you could maybe release a version without Sam, the dog?

Also, is there any way to make the loot changes apply to crucible too?

I was wondering if you could maybe release a version without Sam, the dog?

Sure, do you want him replaced with a normal NPC, or want him completely gone? You need some NPC to receive the buff and to take the Pahr Gon Levels, so these would be removed.

Also, is there any way to make the loot changes apply to crucible too?

Should be possible for me to do.

Thank you for your reply.

Yes, I want the buff completely gone, so no need to replace the dog with an NPC.

Also, I understand if it is too demanding to do. Thank you anyway

Why don’t you just not use the dog ?

Here you go, Dog Away Version (Patch 1). I only needed to change one line of code, so no trouble at all, although you could have indeed just ignored the dog, since he does nothing besides granting the buff?

Ok made a char to try out. Oathkeeper still fubered. necro ok. Dog appears next to you like you say but I actually didnt get a dog. I got the little green pointer and could interact with dog but no visual.

Oh shit, completely forgot about that! Actually such a simple fix … Thanks for reminding me!

Dog appears next to you like you say but I actually didnt get a dog. I got the little green pointer and could interact with dog but no visual.

I see, this did not happen to me since I overwrote the base files, so I did not notice. Horrible QA from me …

Alright, I fixed both issues, the links are updated.

The update did not make it to the non-custom light weight version on the mega site. The nexus download does include the update.

Also, thanks for this mod. Boost to leveling, which the faction exp potion already does, plus extra loot.

Wondering if you’re open to making an “extreme” version of your mode? Like making writs and xp pots available in early game, 2-pt devotion rewards, etc. to extremely speed up the leveling process ;D And am curious what you think of making a vendor that sells the good monster infrequents, and have them spawn deep in challenge dungeons that require skeleton keys to access; so it will cost 1 skeleton key per vendor inventory roll.

Question if I start a char in this lightweight version can I switch over to other when you get it up w/o any problems. Or like most mods start a fresh char?

I dont want an extreme version myself. But maybe make more options on doggo then a person can choose.