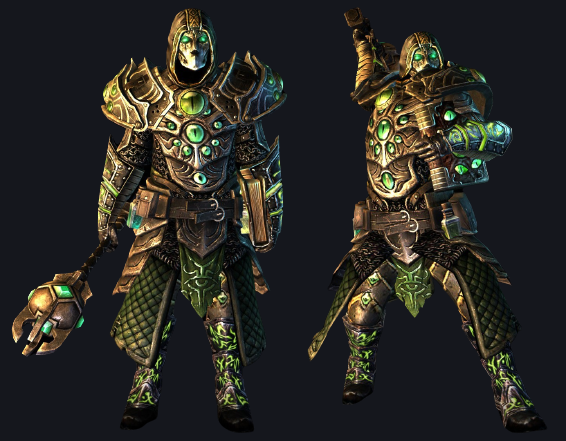 credit to RektbyProtoss, Ulvar, Nery and Stupid Dragon for general info on the game
Crate for buffs to the skill, grey_maybe for tests and feedback on various DEE builds

what do u think of shuroth rings x2?
btw great build!

what do u think of shuroth rings x2?

Too hard to farm, the idea here as with most other beginner / ssf builds is that I only use easy to get / rng independent gear.

But in general you’re right, these are BIS for Acid DEE and I used them in the Non-SSF bonus build.

In the Non-ssf bonus section I made a more tanky / casual version suitable for Ravager which I don’t expect to have problems with farming SR75 or Crucible (because those aren’t terrible for this far weaker beginner build in the first place).

do u think there will be any noticeable dmg difference, cuz your non ssf build does give great tankiness compare to dps build

DEE build, guides uses green text, how can we not give this man bonus points for theme!

Nice work tqFan. A very in-depth beginner guide with great results to back it up. Interesting that you were able to push to SR 75 with the lvl 75 version of Dreeg’s set and such budget gear.

Wow, lots of work went into this. As for the build, my 2 cents, I’m not sure you can afford Manticore with this cast speed and edgy (?) sustain, I’d still go for Revenant here.

Wow, lots of work went into this.

This is my strat to have GD last me till GD2.

I’m not sure you can afford Manticore with this cast speed and edgy (?) sustain, I’d still go for Revenant here.

I’m originally a Revenant guy on Acid builds (i.e. Acid WKM Witch Hunter), I started using Manticore being influenced by other builders. It does have 4% Phys Res and 90% Acid damage. Perhaps it could be better, I’d have to test it but I already have 16% adcth + Sigil + Bat + Ghoul.

Hmmm… Since Sandstorm has been nerfed I don’t think it’s worth it now.

Maybe aim in something like Caustic of Celerity
(or of Corruption - I don’t remember how frequently it shows at Vinelton’s): 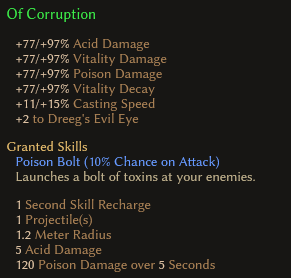 It would fix my not maxed out Casting Speed.

Can you reset-farm Vinelton on Normal and Elite difficulty? I was trying to reset-farm him yesterday on Normal and it didn’t work (I had never tried it on Normal before). I went to the previous level of the dungeon just like in your video.

Also, can you farm the same blueprints on lower difficulties as well? I was wondering if I could farm level 75 sets and other good items on Elite difficulty, for example.

Just tested in on Normal and it worked for me. Blueprint were there too.
Maybe try going a little bit further in the area without Vinelton / wait 10 seconds.

I just tested it again on Normal and is working as intended and as you explained and showed in your video. Not sure why yesterday it didn’t work sometimes (maybe it was working and I was just tired or my game bugged).

So in theory you could farm Dreeg Set on Elite and use it earlier for leveling, but it might be too costly to craft it before Ultimate, not sure. It would be really fun to level with it though.

you might have been too fast, when you transition to zone/load screen it seems there are variables, usually i just have to wait liek 10-15secs, but others have told me they need to wait up to 30secs or more before running back or inventory wont have reset - i’ve no idea why or what does it

Yeah, I was not waiting any seconds at all, so that might be it. The funny thing is that today I didn’t wait either, but it worked. Guess my game upgraded lol.

Bookmarked this thread to give it a go later - I have been looking to try out DEE for the first time. TY much.

Also, I may steal your nesting format from you to use later. Lol